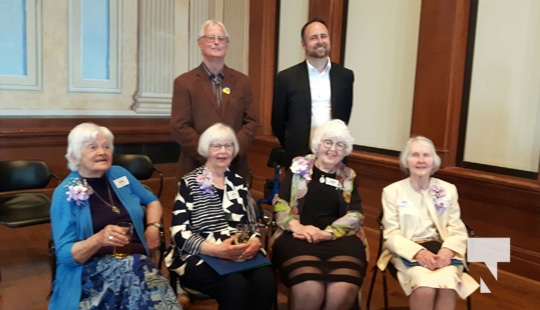 By Cecilia Nasmith/Today’s Northumberland
Victoria Hall Volunteers were delighted to come together for the first time since COVID to enjoy a special celebration in honour of their four members who have been active since the group was founded 47 years ago.

Anne Wilson, Barbara Jean Taylor, Mary Jane Pocock and Jane Greathead were unanimous is their praise for the group’s organizer and first chair Marion Hagen. Without her, Greathead said, they surely would not have been as successful.

“It’s wonderful! Who would have ever thought all those years ago!” Taylor declared.

Wilson came to Canada with her husband in 1969, and it wasn’t long after that they heard there was a very real risk of Victoria Hall being bulldozed. She was among a number of friends approached by Marion Hagen with an appeal to form a group to protect and promote Victoria Hall.

Taylor also got one of those approaches from Hagen, a one-page letter asking if she would be interested in being part of the effort.

“I remember the day we met at Marion Hagen’s, just a few of us, and we wanted to know what we could do to help Victoria Hall.”

Greathead said that their work actually began before they formally organized. They put together a house tour as a fundraiser for the Victoria Hall preservation efforts.

“Marion said, ‘We need more money coming in for the restoration committee,’” she recalled.

On a warm spring evening 47 years later, Shelagh Purcell sat in a corner of the beautiful Victoria Hall Concert Hall with its trompe l’oeil walls and ceiling, providing music for the occasion of their celebration on the grand piano the group’s fund raising made possible.

Everywhere you turn, you can see enhancements like this that they have made possible (the display cabinets on the first floor only a couple of years ago, for instance). And there’s also much that’s not visible but is also their doing – such as maintenance and upkeep on things like the clock tower that tops the building.

Current VHV Chair Diane Chin recalled that the building was in such disrepair in the early 1970s that it had been declared unsafe for occupation. And all members of Cobourg council save one were willing to entertain the possibility of razing it to the ground. The one hold-out was Councillor Lenah Field Fisher, a woman so indomitable that her determination eventually carried the day.

The Society for the Preservation of Victoria Hall was founded and, in 1975, Victoria Hall Volunteers were formed to help with the fundraising required for the restoration. They soon raised $50,000, an extraordinary amount for 1975.

“Just a few weeks ago, believe it or not, we celebrated our town volunteers in this very room with the 20th annual Town of Cobourg Civic Award event,” Cobourg Mayor John Henderson said.
“I would say as mayor how lucky we are to be celebrating four more exceptional volunteers.

“Cobourg, as you know, is a town truly blessed with an outstanding giving spirit. I have been all but blown away by the calibre of volunteers we have within our community. I swear sometimes that volunteers can move mountains, and these four young ladies have moved many mountains,” Henderson said.

Greathead continues her activism on behalf of Victoria Hall in spite of having moved away from Cobourg.

“If I can’t find you here, I can find you at St. Andrews’ soup kitchen,” Henderson said.

Taylor has taken on the difficult task of the fundraising committee – no picnic at the best of times, but especially challenging today. And that’s while volunteering for such organizations as Northumberland Players.

Wilson continues her support of the group and generously shares her artistic talents.

“We often think of volunteers in terms of five years, 10 years. Ladies and gentlemen, 47 years is a lifetime of volunteerism – truly outstanding,” the mayor said.

Henderson presented each volunteer with appreciation certificates from the town, following the ones presented by MP Philip Lawrence (who was attending to represent both Federal and provincial governments).

“When I look at this building, the magnificent Victoria Hall, it’s really a tribute,” Lawrence said.

“When we see these beautiful buildings, of course we marvel at the architecture. But I like what it represents. It represents such dedication – 47 years of dedication, 47 years of vision, of hard work to make the memories that are here.”

Lawrence reflected on the countless people who had weddings, proms and many other life celebrations in the elegant room.

“We appreciate the people that make our community work, that contribute not because they have to but because they want to,” Lawrence said.

A toast to Queen Elizabeth II on the year of her Platinum Jubilee followed. Before inviting Purcell to play God Save The Queen, Chin noted that the Queen’s ancestor – King Edward VII when he was Prince of Wales – had been present at the grand opening of the hall in 1860, dancing with the local ladies on the Concert Hall floor.

The honouring of these four amazing women was a big part of the day, but the occasion served also as a reopening of the beautiful hall and a chance to get things going again with the group following their COVID-forced hiatus.

Wilson carried a tote bag full of envelopes containing photocopied clippings she had prepared for a number of friends.

Other clippings had been put out on display – past executive groups, publicity shots and even the entire special-edition supplements the daily newspaper put out in honour of Queen Elizabeth II’s 1973 visit (during which she met with Society for the Preservation of Victoria Hall Executive Director John Taylor) and the grand reopening of the preserved, restored Victoria Hall in 1983.