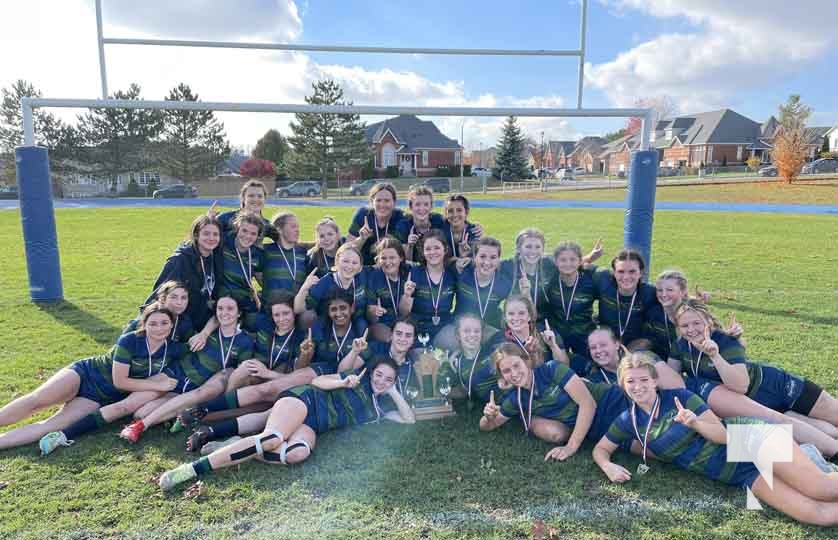 By Jeff Gard/Today’s Northumberland
The St. Mary Catholic Secondary School Thunder senior girls rugby team is heading back to the provincial championship.
They won’t be occupying the host slot this time around like they did in June of this year when the Ontario Federation of School Athletic Associations tournament was held in Cobourg.
St. Mary will head to the OFSAA girls A/AA showdown in Belleville next June as the Central Ontario Secondary School Athletics champion after knocking out Peterborough’s Holy Cross Hurricanes with a hard-fought 7-5 victory Tuesday afternoon in Cobourg.
It was the second win within a week for the Thunder against what has been a dominant Holy Cross program over the years. St. Mary also defeated the Hurricanes in last week’s Kawartha final.
“It’s a testament to my players, their work ethic at practice, and it really comes down to their rugby IQ,” said Thunder coach Shawn Carmichael. “Holy Cross made some adjustments in the second game and I’ll give my players full props because they had to make adjustments in the way they organized their defence to keep that game close. Had they not stuck their tackles, had they wilted and broken their defensive line, that game could’ve been a 20-5 loss.”
St. Mary advanced to face Holy Cross with a convincing 31-0 victory over Trenton High School in the semifinals. Tatum Ireland, Leila Briscoe, Emma Rypstra, Ryleigh Woods and Tristan van den Heuvel scored the Thunder tries with Nott notching three conversions.
Holy Cross defeated Belleville’s Centennial Secondary School 26-14 in the other semifinal.
Trailing 5-0, the Thunder tied the score when Kiera Martin battled her way through the line for the try, which was converted by Gloria Nott.
“Kiera is a spark plug. She’s electric when she’s out there, she’s tough as nails,” Carmichael said. “When we practice, what I try to get my players to recognize is when you have the ball you’re a runner and a distributor. We need to make our choice – is there a gap I can hit, do I need to make a pass? It’s getting them comfortable in those situations. Clearly Kiera saw a gap to hit, she hit it hard, dragged a defender and scored the try. Fantastic.”
Nott has been a strong kicker for the Thunder and her successful conversion following Martin’s try proved to be the difference in the victory.
Carmichael said Nott’s success is the result of her time and effort honing her skills.
“I’ve watched that young woman kick that ball for 15 to 20 minutes after practice religiously,” he remarked. “When that opportunity came to her, she didn’t miss and that’s a testament again to her commitment to being a rugby player.”
St. Mary earned the OFSAA  silver medal last season, losing in the championship final to Holy Cross. The Kawartha and COSSA victories were the result of a constant building process that included the 2021 fall season, winter training, spring exhibition games, OFSAA and then club rugby during the summer.
“Thirty-four St. Mary’s girls played summer rugby with the Saxons and I coached them so we’ve been together for a long time,” Carmichael noted. “What happened this past week is the girls achieving maturity when it comes to being rugby players. For me as their coach, I’m very proud of that and it’s their achievement. They go out and play the game. My job is to prepare them, their job is to go out and play to the best of their ability.”
St. Mary senior girls rugby team members are: Leila Briscoe, Tatum Ireland, Taylor Harrigan, Brianna Bolton, Gloria Nott, Sydney Pipe, Grace Jenkins, Grace Rice, Emma Khaimovich, Mikaela Stewart, Sydney Souch, Maggie Lycett, Kiera Martin, Ryleigh Woods, Veronika Mokros, Autumn Howard-Day, Diya Patel, Emma Rypstra, Bella Angelo, Jess Vivian, Nikayla Casselman, Megan Meade, Brooklyn Jeanes-Bonnor, Zoey O’Connor, Chloe Middleton, Presley Barton, Tristan van den Heuvel, Tahlia McNally, Brooke Bennett, Ella Besslich and Sydnie Walton.
Winter training will be on the agenda again this year and players are also heading to Scotland on a rugby tour in the spring.
Despite not hosting the provincial tournament this year, the Thunder are sure to be well-supported at the OFSAA championship as Belleville will host the event from June 5 to 7, 2023.
“It will be easy for parents to come watch and we get the benefit of sleeping in our own beds which is a huge advantage,” Carmichael said. “I know Belleville will put on a great OFSAA. Mary Anne Sills Park, that complex, is I think the best in Ontario so I’m really looking forward to it. We’ll see if we can change the colour of our medal this year.”