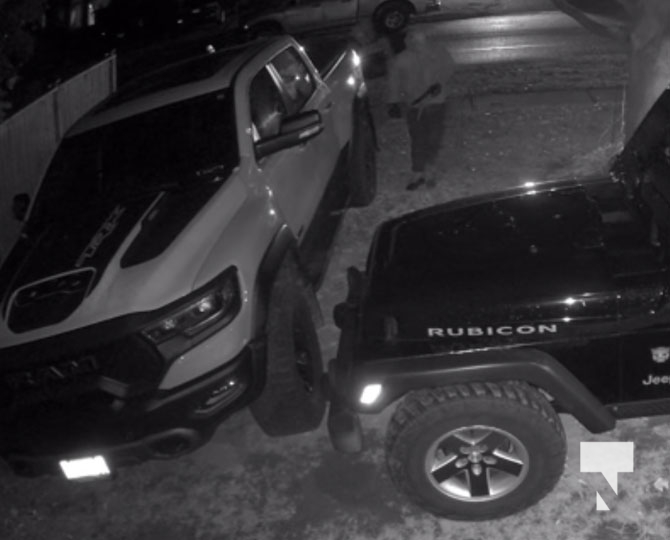 On Friday, October 21, 2022 at approximately 1:50 a.m. the suspected thieves snuck up beside the 2022 Dodge Ram owned by Brad Trumper and tried to shatter the passenger window with a device.

Part of the home security system Trumper has includes a number of cameras and a lighting system.

When the system was activated by the motion and a number of lights were activated and the suspects ran away to a vehicle nearby.

The time they appear on-camera to the time they left camera sight, approximately 30-seconds.

It appears a number of Dodge Rams have been stolen by means of what is called a “relay attack,” said Trumper.

“These relay attacks are serious business for car thieves who use them to get into the cars interior without breaking anything or even to drive your car off and probably into a overseas shipping container or chop shop.”

The site states that thieves can “sniff” for the signal near your garage or front door and transmit it to the car parked on the street or driveway out front.

Another shocking method is a person could see you park your vehicle at a mall or anywhere, follow you, and transmit it the signal back to a accomplice that’s waiting by your vehicle.

Experts are suggesting to store your keys (keyless entry system) in a metal container away from walls and doors. For an ideal situation, it would be to store them in the basement.

“The point is maximizing the amount of space, building materials and especially metals between your (keyless entry system) and your car.

In the home security video shared by Trumper, a vehicle goes by his residence at 1:53 a.m. on Friday morning.

At approximately 2:29 a.m. the same vehicle once again appears to go by the house.

On his property are his 2022 Dodge Ram and a Jeep.

Under a minute later two masked suspects walk onto Trumpers property. One of the suspects goes to the front door of his Dodge Ram and appears to put his hand on the door handle and waits.

The other suspect goes to the front entrance to the home.

In 10 seconds the pair of thieves have tried and failed to steal the truck and are off to find another one.

Trumper didn’t even realize his vehicle had been tampered with until Friday evening when he got into the truck and saw the marks on the window. He then checked his home security video and saw what had happened and called Cobourg Police.

With today’s technology, Trumper said thieves will be able to access a vehicle before a person will even get out of their bed.

“Basically your phone is faster than your two-feet so call it in and hope that that works.”