Another Encampment Discovered in Cobourg 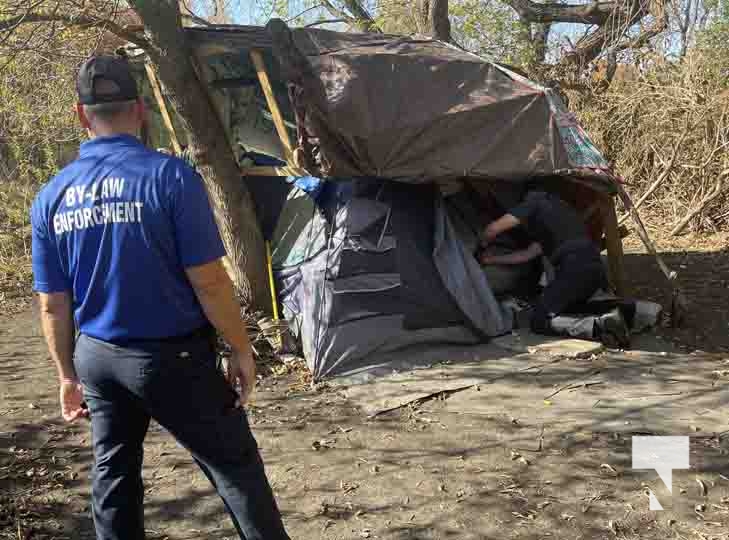 Today’s Northumberland was onsite when bylaw officers with the Town of Cobourg walked through a homeless encampment on Saturday, October 22, 2022.

It was approximately 2 p.m. when three by-law officers walked through the encampment in central Cobourg.

There were at least three areas where people were living, which included tents and other forms of shelter that were at the site.

It appeared that brush had been set up to possibly camouflage the area from nearby roads.  Areas around two of the tents were very clean with sticks and brush in piles along with recyclables in a small area.  In front of one tent’s entrance was a cement patio slab that almost resembled a “welcome mat.”

The bylaw officers checked the area and spoke to one man who said he was visiting his friend who was homeless.

After bylaw officers left the area, the 40-year-old man spoke to Today’s Northumberland.

The man agreed to speak in an open and candid conversation, but we will not be using his name.  For the purposes of the article will call him Tim.

TN: As an outsider looking in what is the number one problem?
Tim: Housing. Horrible housing. I’ve been around the area off and on for nearly 20-years and I’ve watched this place go from a happy medium to a point where people are absolutely homeless. The shelters are overrun. There is no affordable housing in town. Low income housing is non-existent. This scenario is impacting our environment hardcore.

NT: People assume things like all these people use drugs or have mental illness. There are a number of reasons why people are homeless.
Tim: Absolutely. It’s a scenario that’s always been an issue from what I can see. I’m 40 and I’ve been watching this shit for over 20-years. I’ve been gainfully employed numerous times. I’m on ODSP (Ontario Disability Support Program) at the moment. I came down with diabetes real bad (along with issues with his back). I’m at the point now where I could do a desk job. I was in sales last time around. I want to work, but I really can’t. Not because of COVID. On ODSP I get $1,250 a month. That gives me $300 a week to live on. By the time I pay rent, I got nothing.
It’s a sad thing, but it’s the truth of it all.

TN: If you could solve the problem, how would you solve it? What’s the first thing that has to be done?
Tim: The first thing that has to be done is people need a roof over their head. From there you can move forward. You can establish roots, start buying bulk in groceries. It puts you in a scenario where you’re capable of working and getting a job. Whereas if you’re staying in a homeless shelter or living in a tent it’s hard to go up from there. I’m in a scenario where I’ve got some family in Grafton, so fortunately things could be worse for me.

TN: You’re not far from here (homeless) though?
Tim: No

TN: Is it safe to say though there are a number of people with mental issues and drug problems that are homeless?
Tim: Absolutely. In this town I’ve watched progress from a place from where there is a problem with drugs to where now it’s utter chaos. People are dying daily. It’s almost to that point anyway. Last year I lost almost 20 people I know. I grew up near Trenton and Belleville and between there and here around 20 people. All overdosed on Fentanyl and shit.

TN: So Cobourg is a major problem for drugs?
Tim: It’s become like an epidemic here. If not all of Southern Ontario or even Canada.

TN: Are the police doing enough?
Tim: No. And if they are they are operating in the background to the point where – basically non-existent. People don’t give a shit anymore. They’d rather take care of their fix than carry on.

TN: Is it the courts too? I’ve found the courts aren’t really strict enough if I can use that word.
Tim: Yes and no. I think it depends upon the scenario individually. There is help out there. I was in trouble a few years ago and I got treatment. Since then things have been a struggle, but I’m doing 100% better than what I was.

TN: What did you use?
Tim: I was into opiates. Because of my pain. I was self medicating myself.