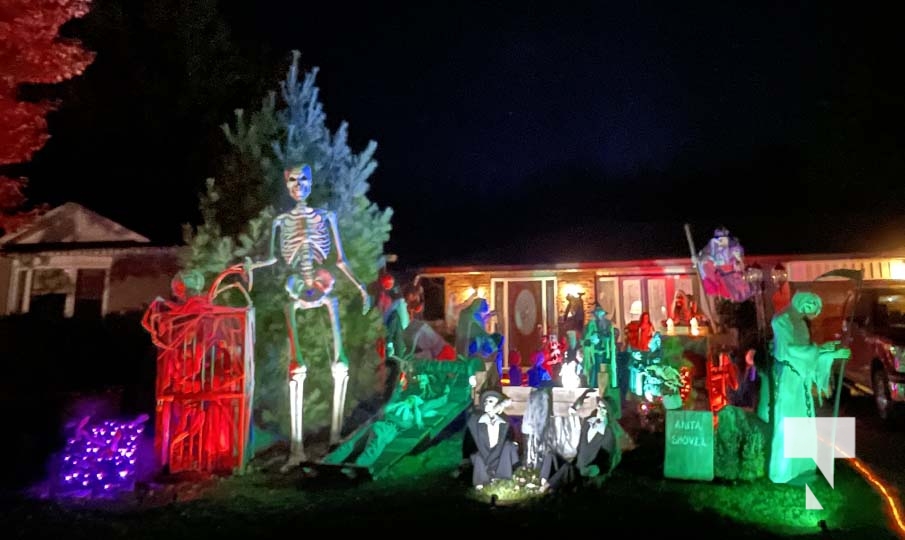 Bob and Emmy Brown have just about completed adorning their front yard with Halloween displays at their Glen Watford home address.

It’s the fifth year for the display and the couple keeps adding more displays every year.

“It does take weeks of work,” said Bob.

“We both enjoy it. We’re both big kids. And we like entertaining the kids at Halloween.”

Emmy quickly shares that it’s not only the kids that enjoy their display it’s adults as well.

Last year even during COVID, the couple had approximately 100 children stop by – this year, they are expecting 150.

The couple both acknowledge there is a lot of money in displays sitting in the front yard where you’d be hard pressed to find six inches of bare grass with all the Halloween decorations.

Setting everything up takes about a weeks worth of work.

“If it’s nice weather, we can do it quicker, but if it’s raining – it takes a good week,” said Emmy.

Another question they get asked is where they store it all.

The Brown’s have a storage shed in the backyard where everything is kept including their Christmas decorations.

There will be two more displays set up on Sunday, October 23, 2022 and that will be it for another year.

But don’t for a minute think the retired couple are kicking their feet up to relax.

When Today’s Northumberland popped by at 9 p.m. on Saturday, they were already working on their Christmas decorations in their living room.

Acknowledging they’ve maxed out the front yard, Bob said, “we can still do the garage and the driveway, but that’s about it.”

After a number of years, both Bob and Emmy know their jobs with the display, but when it comes down to it, “she tells me what my job is,” Bob says as they both laugh.

“We work it together. We both come up with different ideas,” said Bob.

Most of the larger pieces that are interactive due take batteries. Because most of the displays are made for indoors they won’t be fully turned on until Halloween to prevent moisture and corrosion.

The big witch, the jail and the stretching rack are new items this year.

With all the hard work setting up the display for days, the couple said it’s great to see families come out each year to enjoy it.

“There is a lot of adults that really like it as well,” said Emmy.

“We’re all just a bunch of big kids around here.”

As soon as Halloween is over, the couple start to get into the Christmas season.

But one rule they proudly share. There are absolutely no Christmas decorations outside their home until after Remembrance Day on November 11.