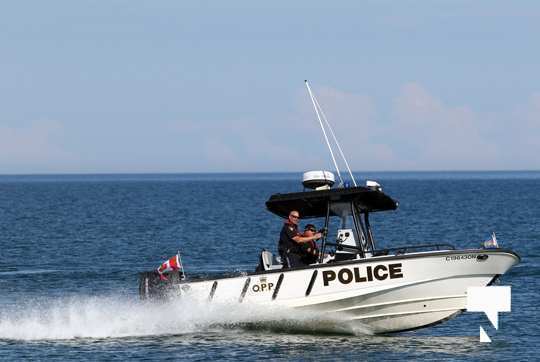 Members of the City of Kawartha Lakes Detachment of the Ontario Provincial Police (OPP) responded to an urgent marine call earlier this afternoon after three separate boats capsized on Balsam Lake.

At approximately 3:30 pm this afternoon officers, along with Fire and EMS responded to a report of a 64-year-old male who’s boat had capsized. While officers were responding two more reports came in of other capsized boats.

One person was on a paddle boat, another in a canoe and another on a 4 ft aluminum boat, all thre e people capsized into the water with strong winds and 6ft swells. Two out of three were wearing life jackets.

Two persons were found floating alive and retrieved by a passing boater who returned them to shore.

OPP SAVE (Snowmobile ATV Vessel Enforcement) were also engaged and while out on their vessel assisted in the rescue one of the outstanding boaters, after they were observed by the OPP helicopter on an island alive and uninjured. This person was swimming for approximately an hour and half prior to being located on the island

With capsized vessels and falling over the top contributing factors in boating deaths every year, a significant number of lives stand to be saved if boaters and paddlers wore lifejackets/PFDs.

Plan ahead. Remember when things go wrong on the water, it can happen very quickly and you don’t always have time to react. Discusses plans with a family member before setting out. Part of being prepared is also making sure that the weather and water conditions are suitable for your day out on the water.