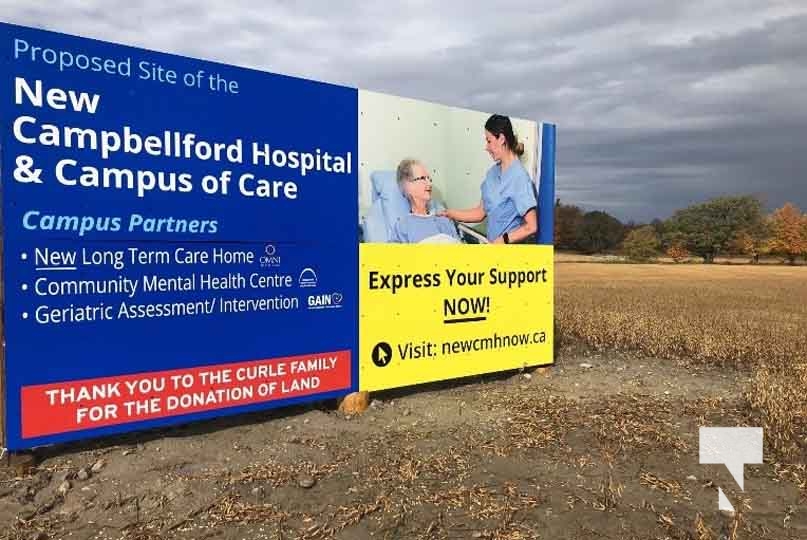 Three months ago, on a rainy October morning, Campbellford Memorial Hospital (CMH) announced that local farmer Jim Curle had donated nearly 50 acres of land for the proposed redeveloped CMH as part of a larger Campus of Care.  In addition to a new hospital, this proposed development will also contain a new Long-Term Care home, a Community Mental Health Clinic, the Geriatric Assessment and Intervention Network, and future plans for supportive senior housing.

Campbellford has heard this story before; with various plans to build a new hospital talked about for decades and formal negotiations with the Province nearing the ten-year mark.  John Russell, the Executive Director of the Campbellford Memorial Hospital Foundation has been at CMH for 10 years and has seen his share of starts and stops when it comes to redevelopment.  “It really feels different this time,” Russell noted, “we have the land secured, we have partnerships in place, a local Long-Term Care home ready to redevelop alongside us, and even leadership donors who are beginning to indicate their financial support.  Local governments across the region have expressed their support, we’ve really never been this prepared to move to the next step.”

That next step involves securing a planning grant, and with it, the Provincial Government’s approval to move the project forward.  The approval will not only provide the funds required to plan and design the new facility, but also provides the needed regulatory authorization.  “Simply put,” continued Russell, “we’ve gone as far as we can without that planning grant.”

Over the past several months, CMH has been increasing their engagement with officials inside the Ministry of Health advocating for grant approval.  This advocacy has not gone unnoticed, and over the past few weeks lawn signs have started popping up throughout Trent Hills directing residents to visit www.newcmhnow.ca to learn how they can help support the redevelopment process and join the We Can’t Wait campaign.  “We’ve always been huge supporters of the hospital,” stated Dave Sharp, President of the Rotary Club of Campbellford, one of the local service clubs behind the We Can’t Wait campaign.  “We wanted to find a way to help, and right now, what we need most, is to show the Provincial Government that our community is behind this project one hundred percent.”

This sentiment was echoed by Don May, President of the Campbellford Lions Club, who have also thrown their support behind the We Can’t Wait campaign.  “We wanted to do what we could to support this project.  The proposed redevelopment will be a huge benefit to our community and everyone who lives here.  Our population continues to grow, continues to age, and we need this project approved now.”

Rotary Clubs in Stirling-Rawdon and Brighton are also supporting the campaign and We Can’t Wait signs will soon start popping up in those communities.

Even if approval of a planning grant comes, it will still take up to seven years until a new facility is ready to open.  A recent analysis showed that over the next ten years, CMH will need between $25-$30 million in renovations and repairs merely to keep it up to current standards.  While the care provided at CMH is exemplary, the facility itself has many limitations.  Over the past year Public Health has twice closed admission at the hospital during COVID-19 outbreaks as the hospital lacks the infrastructure needed to maintain enough private rooms and meet modern outbreak control standards.  Some patient rooms lack private bathrooms, certain parts of the facility are 70 years old and as a result lack the accessibility, technology, and patient flow designs that you would typically find at newer hospitals.

“It really comes down to one of two things,” explained John Russell, “do you continue to spend money maintaining a limited facility, or do you invest that money to build a modern, state of the art hospital that will be able to recruit top talent and continue to provide the exemplary care our community needs.”

Residents who want to learn more about the We Can’t Wait campaign, or to get involved, should visit www.newcmhnow.ca.