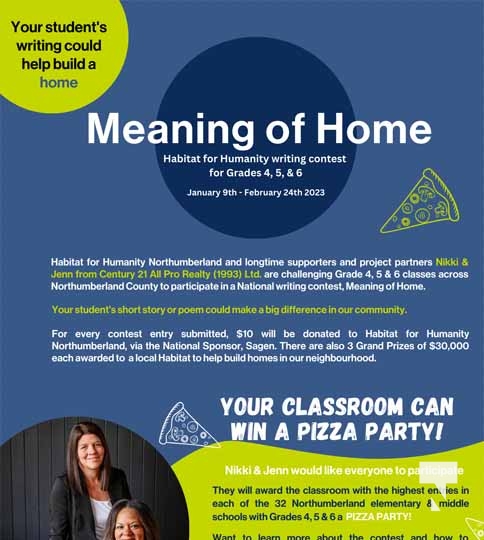 What does home mean to you? On January 9th the nationwide Meaning of Home writing contest launched for another year. The contest, which encourages students in grades 4, 5 and 6 to share what home means to them through a poem or short essay, is open for submissions at meaningofhome.ca.

The contest runs from January 9 to February 24, 2023 and three grand prize winners, one from each grade, will receive a $30,000 grant to be directed to the local Habitat home build of their choice. This year Habitat Northumberland has partnered with local Century 21 All Pro Realtors, Jennifer Lean-Gadbois and Nikki Kelly, to sweeten the prize pot. Lean-Gadbois and Kelly
would like to award a pizza party to the class with the most entries in each of the participating Northumberland schools.

“We’re so pleased that realtors participating in our project partner program have come forward to really shine a light on this contest”, noted Executive Director Meaghan Macdonald. “And who doesn’t like pizza? We’re hoping that this extra element from Lean-Gadbois and Kelly means schools who have participated in the past are joined by new ones.
We want all the grade 4, 5, and 6 students in Northumberland County to get inspired to write about what home means to them.” Every student entry earns a $10 donation towards Habitat Northumberland, so each student’s participation is a win for the community.

The Meaning of Home contest was founded by Sagen in 2007 and has raised over $2 million to help build decent and affordable housing in communities across Canada. Last year over 13,000 entries were received, the largest number of submissions Habitat Canada has ever received for this contest and raised over $311,000. Meaning of Home submissions are judged and three grand prize winners, one from each grade, will receive a $30,000 grant to direct to the local Habitat home build of their choice. Nine runners-up, three from each grade, will also receive a $10,000 grant
towards a local Habitat build.

Teachers or parents who are interested in having their grade 4, 5 or 6 students participate can access an educational module online at meaningofhome.ca that includes writing tips and information on affordable housing issues in Canada. Winners of the 2023 Meaning of Home contest will be announced in May 2023.

The Meaning of Home contest would not be possible without the generous support of Founding Sponsor Sagen.
Thanks to their investments, students have an opportunity to give back to their communities in an engaging and meaningful way.