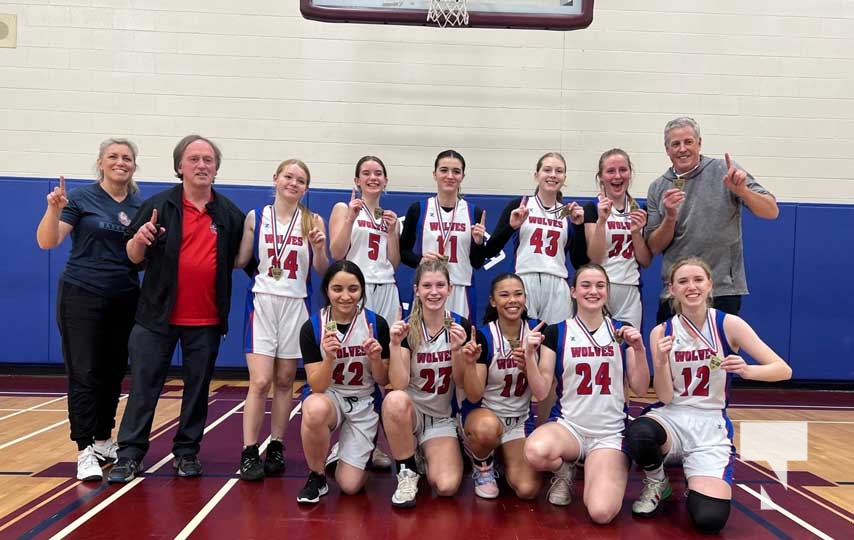 This past Thursday in Belleville, the CCI Wolves won their Central Ontario Secondary School Athletics championship tournament to advance to the Ontario Federation of School Athletic Associations (OFSAA) girls’ AAA provincial showdown in the Windsor area.

At this time, as CUPE negotiations continue with the provincial government, CCI coach Shane Urbach said the OFSAA championship tournament is expected to go ahead.

“The players are extremely excited and can’t wait to head out on Wednesday,” Urbach said.

Urbach noted the team began the season with just six players – all with current or past rep experience – and were able to add a few more players before the first game.

“This is a very special group of individuals,” he remarked. “They are a tight knit group that put team goals ahead of personal ones. Throughout the entire season the girls were supportive and encouraging to one another and played for team success.”

Overall, CCI’s senior girls basketball team is 13-1 to date, with the lone defeat occurring at the Trinity College School invitational tournament against a strong opponent from Brockville.

They won the Kawartha championship on Nov. 9, defeating Peterborough’s St. Peter Catholic Secondary School 45-32 in the semifinals and Lindsay’s I.E. Weldon Secondary School 54-39 in the final.

“The biggest lesson the girls learned this year was the ability to manage the game. Because of the team’s small numbers, they had to learn more patience and decision-making while on the court,” Urbach said. “Many of the girls were very focused on a fast-paced attacking offence, which is a positive way of playing, but when you have limited substitute players on the bench, you need to attack when appropriate and recognize when you shouldn’t.”

OFSAA Girls AAA Basketball is scheduled for Thursday through Saturday in Belle River. No list of participants, seedings or schedule has been released yet.

“These girls missed out on high school basketball the last few years, but by winning Kawartha and COSSA they definitely made up for all that lost time and opportunity,” Urbach said.