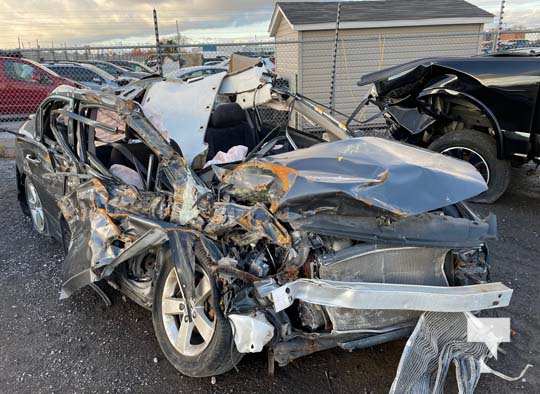 A Hamilton Township man pleaded guilty in Peterborough Court on Thursday, October 20, 2022 to five charges resulting from a fatal collision on August 6, 2021 in Otonabee-South Monaghan Township.

Crown Attorney David Parke, along with Ontario Court of Justice Timothy Breen listened as nineteen-year-old Hunter (Justin Wayne) Smith stood by his lawyer, Jeff Smart, as each one of the charges was read in court. Smith’s only words to the court were “guilty” as each of the five charges was read.
Smith pled guilty to:

· while operating a conveyance caused the death of Neil Henley

· while operating a conveyance caused bodily harm to Jack Carlson

· while operating a conveyance caused bodily harm to Ella Ring

· failed to stop for police

· while operating a conveyance caused bodily harm to Matthew Couch

A number of family members were in the courtroom or watching virtually including Henley’s mother who was visibly emotional during the procedure.
Crown Attorney David Parke read the agreed statement of facts to the court which reads as follows: On Friday, August 6, 2021 at approximately 10:30 p.m. Hunter Smith caused a serious motor vehicle collision resulting in serious injuries and one fatality. The collision occurred on County Road 28 at the intersection of Ward Street in Fraserville, just south of the Kawartha Downs Racetrack.

As Smith was driving southbound at approximately 162 kph he moved into a oncoming lane of traffic then attempted to pass a vehicle that had slowed to make a left hand turn. As the vehicle turn left, Smith’s vehicle struck it’s front passenger side.

Background
That evening, Smith, Neil Henley, Ella Ring, Jack Carlson and Matthew Couch were friends. Earlier that evening they all met at Smith’s house in the Cobourg/Port Hope area and drank alcohol and smoked marijuana.

It was unclear how much any of the individuals consumed.

But the group decided that Smith would be the designated driver.

They decided they wanted to go to the Peterborough Casino, so Smith drove them in Henley’s Honda Civic.

When they arrived, Henley, Carlson and Couch went into the casino while Smith and Ring drove around Peterborough.

Later in the evening, Smith was called to pick the group up at the casino.

A Peterborough Police officer was conducting speed enforcement on County Road 28 and was parked at the entrance to Kawartha Downs monitoring both north and southbound traffic.

The officer spotted Smith driving southbound at a “high-rate of speed” obtaining readings of 110 kph and 120 kph in a section of road that has a 80 kph speed limit.

“The officer pulled out behind Mr. Smith and activated his emergency lights. As the officer began to pursue Mr. Smith, Mr. Smith sped up.”

The officer was travelling at 140 kph, but Smith’s vehicle was pulling away from the officer

The officer lost sight of the vehicle when it passed over a hill.

Smith utilized the left turn lane to pass a southbound vehicle. The manoeuvre was captured on video at a gas bar and of a vehicle being passed.

The video from the camera was analyzed and it’s estimated the vehicle Smith was driving was travelling at 162 kph.

“Seconds later, after the roadway collapses back into two lanes, Mr. Smith is observed travelling into the oncoming lane to pass a Dodge Ram pickup truck. At this time the pickup truck was signaling and had commenced a left-hand turn.”

Data obtained from the pickup truck indicated it was going approximately 23 kph.

Both vehicles collided with Smith’s vehicle striking the Ram on the front driver’s side. The Ram was pushed to the right tearing off a front portion of the axle.

The vehicle Smith was driving was pushed to the left over a curb causing it to flip before coming to a rest, 64-metres south of the collision in the east ditch.

Injuries
The driver of the Dodge Ram pickup had soreness to his head and overall body soreness. The passenger had a sore arm and wrist.

Neil Henley was in the front passenger seat of his car (Honda Civic).

Ella Ring, Jack Carlson and Matthew Couch were in the rear seats.

Henley (age 19) was killed as a result of the collision.

Ring was taken to Sick Kids Hospital in Toronto to be treated for fractured ribs, collapsed left lung, fractures to her spine and pelvis and facial lacerations. She was intubated for a number days due to fluid in her lungs.

Carlson stopped breathing on the scene and was revived after performing CPR. He was taken to Sunnybrook Hospital in a coma in critical condition. Carlson’s injuries included fractured ribs a broken clavicle, lacerations to his kidney and liver, trauma to his aorta, both hips dislocated, a broken femur and multiple facial fractures.

Couch was taken to Peterborough hospital. His injuries included a separated right shoulder and a concussion.

Smith was taken to Peterborough Hospital where his injuries including a broken left leg, requiring multiple surgeries and a laceration to his right arm and left.

Alcohol and Drugs
At the scene of the collision officers spoke to Smith and smelled alcohol on his breath.

Officers went to the hospital and told Smith they were investigating a fatal collision, before cautioning Smith and demanding a sample of blood.

Two samples were drawn within two hours of the collision. The concentration alcohol in Smith’s blood was determined to be 82 milligrams in 100 millilitres of blood and a concentration of THC was 22 nanograms per millilitre.

Driver’s License of Hunter Smith
At the time of the collision, Smith was a novice class driver.

Further his license was suspended for unpaid fines and for accumulating to many demerit points arising from previous convictions of failing to stop at an intersection, careless driving and speeding (149 kph in a 100 kph zone).

Submissions on sentencing and a number of victim impact statements will be heard at the sentencing hearing on January 31, 2023 in Peterborough.