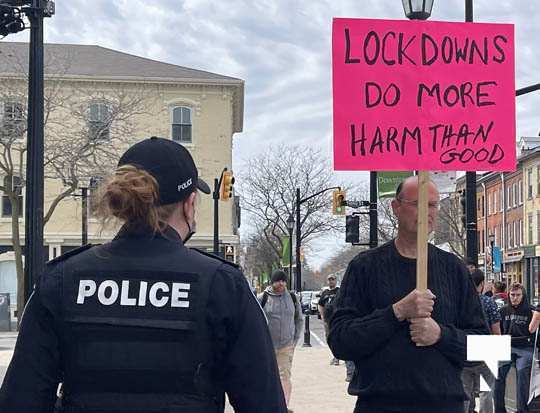 By Cecilia Nasmith/Today’s Northumberland
Monday’s virtual press conference to explain the events of last weekend – which saw a number of people issued tickets during a lockdown protest in front of Victoria Hall – featured an exploration of the issues involved by Cobourg Police Chief Paul VandeGraaf, Police Services Board Chair Dean Pepper and Cobourg Mayor John Henderson.

It was a gathering of the type that has taken place regularly on weekends throughout the pandemic. Prior to the one last Saturday, VandeGraaf noted, the Province of Ontario declared a State of Emergency and issued a Stay-At-Home Order under the Emergency Management and Civil Protection Act that is expected to last at least until early May.

The title says it all, the chief pointed out – stay at home unless it’s absolutely essential.

The police have relied on four Es, he said – engage, education, explain and then (as a last resort) enforce.

“We have been clear we are at the point where, if people do not comply, they will be charged accordingly,” VandeGraaf stated.

When Saturday’s gathering saw 25 to 30 protesters, officers engaged with the group, explained again that they were in contravention of the Stay-At-Home Order and asked them to disperse or be charged under the EMPCA. When they were allowed ample time to comply but failed to disperse, seven tickets were issued and two individuals were issued a provincial summons.

“We are still looking to identify three individuals who did not identify themselves. It is anticipated these people will be charged at some point this week,” VandeGraaf said.

“I suspect these will be processed through the courts with the appropriate vigour.”

VandeGraaf referred to the video of the incident taken by Today’s Northumberland, which shows the professionalism of the police, special constables and bylaw-enforcement officers doing their job, “even while having misogynistic, sexist, racist and derogatory slurs hurled at them by members of the group. They rose above that disrespect.”

To be clear, he said, “I am not here to debate the Charter of Rights and Freedoms, or anyone’s personal opinions on COVID-19, current health measures, vaccines or the provincial response. Everyone is entitled to their opinion. But this puts the community and the health-care system at risk.”

Pepper reiterated that the Today’s Northumberland video showed members of the enforcement team conducting themselves professionally in an atmosphere of total disrespect.

“The members did an exemplary job under incredible circumstances – they did their job with distinction and with grace,” he declared.

Henderson had three messages to convey.

One was a declaration of support for the professionals who were on the scene Saturday.

Second, he commended the Cobourg Police Service and bylaw-enforcement officers for their consistent work over the last 14 months engaging various groups with the four E approach.

“Please don’t think for a moment this has just started to take place. Let me repeat – we have been doing this for a 14-month period,” the mayor emphasized.

Third, the third COVID wave is a time for increased urgency with the way the province’s numbers are cresting. Even in Northumberland, there is cause for concern. If there were no emergency order and the old colour-coded system were in place, the Haliburton Kawartha Pine Ridge District Health Unit region would be in the red.

Echoing VandeGraaf, he stated, “I am not hear to debate your personal preferences, what your attitude is toward the provincial order, what you believe your civil rights to be.”

While they hope their approach last weekend might be a deterrent for next weekend, VandeGraaf noted that they are planning for a recurrence.

“The right to protest is inalienable to us as Canadian citizens. The issue becomes when that right becomes more important than a Stay-At-Home Order,” the chief said.

The EMPCTA trumps the Charter of Rights and Freedoms, Henderson agreed.

“These decisions, as we approached this weekend were not made easily, nor were the previous decisions not to lay charges made easily,” VandeGraaf said.

“I feel patience and diligence are the better part of valour.”

Under the EMCPA, fines range from $750 to $1,000. But it was pointed out that charges have been laid over the past year – trespassing on the fence-off Victoria Park beach, for example – and came to very little, dismissed or treated with slap-on-the-wrist dispositions.

While they only lay charges they feel are justified, VandeGraaf said, the separation of enforcement and judicial functions is an important function of government that provides a second set of eyes on a charge.

Still, he said, “I will be very loud and clear I expect these charges to be pursued through the courts with credible vigour.”

The charges will be backed up with the Today’s Northumberland video presented in evidence, he added.
“At the end of the day, people make choices. And with choices, there are consequences.”

Henderson shared his own reaction to the Today’s Northumberland video, watching the officers’ calm, respectful and professional manner.

“I only wish the people receiving this reciprocated in the same way.”

Though they started last Saturday with the four E approach, VandeGraaf said, “at the end of the day, it’s a health situation. The numbers continue to rise. Thursday, 38 Ontarians died.

“They gave everybody the opportunity to leave without a charge. They made the conscious decision not to obey the officers’ request, and the charges were laid.

“We will continue on that path. Only when they choose consciously not to comply will charges be laid.”

The numbers of enforcement officers on the scene led to a question about police presence elsewhere for other purposes that day, including a weapons call.

“No call was delayed in responding, and we had two or three people arrested for various warrant-type of offences,” the chief replied.

“Nobody in Cobourg was without the support of police.

“Had we had an all-out emergency, we would have pulled everybody out of that protest and moved to the high-priority call.”

VandeGraaf added that Port Hope Police had been made aware of enforcement plans and could have been called on if necessary.

“We already had our first planning meeting to debrief from last weekend and plan for the next.”

Asked about the danger of protesters beginning to feel persecuted and martyred under stricter enforcement measures, VandeGraaf admitted they had considered that possibility.

Henderson said the martyrs of the pandemic are those who put themselves in harm’s way for others – “our front-line officers, our health-are workers, those working in supplies and services of goods to keep systems open, our public-health teams, our doctors, our bus drivers, the list could go on,” he said.

Among them, he added, would be more than 500 volunteers at work on such initiatives as the mass-vaccination clinic at the Cobourg Community Centre.

Below is video from Saturday’s protest