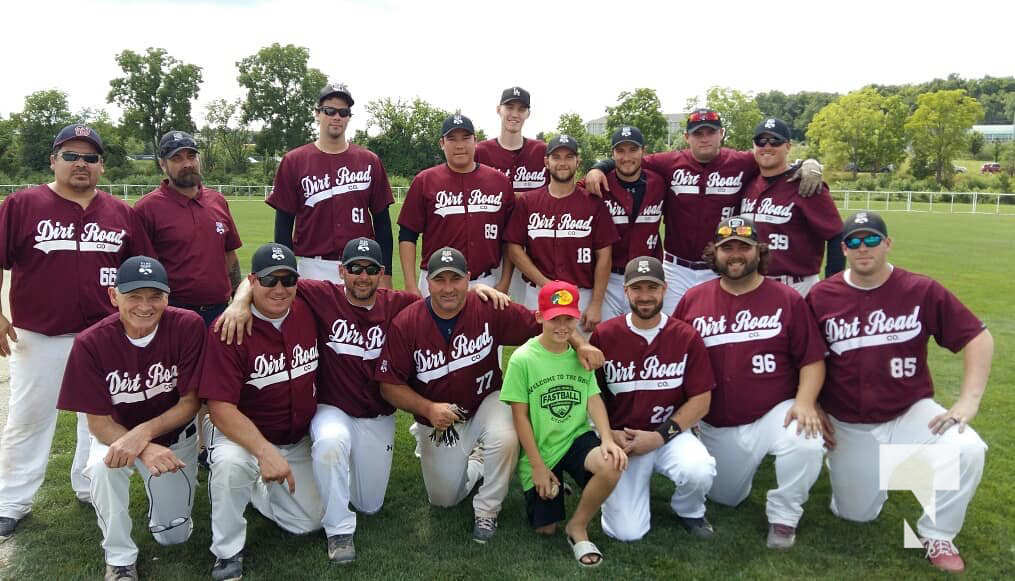 Cobourg’s Dirt Road Co. Fastball Club is preparing to face some of the best players in the world.

They have qualified for the International Softball Congress (ISC) World Tournament that will be held Aug. 10 to 18 in Denmark, Wisconsin, just outside of Green Bay.

Six qualifying spots were up for grabs this past Friday through Sunday at the ISC Canada East Qualifier in Ingersoll. The Cobourg club posted a 2-2 record, including wins over Wiarton and Dundalk, to place fifth and book their ticket to the Worlds for the second straight year.

“It’s the highest level of fastball you can play when you go to the Worlds, outside of playing for your country,” said player/manager Shane Taylor, adding “it’s a pretty big jump for us” making the trek to Wisconsin as last year’s event was in Kitchener.

“Knowing that we are going there with a good team makes a big difference,” Taylor said. “You’re going there for an experience, but have a good chance of competing.”

In what he describes as a “very competitive tournament,” Taylor noted that the top teams have notable international players, including national team players from countries such as Canada, Mexico and Argentina. “In this ISC World Tournament, you get a chance to face the best pitchers and hitters in the world because they are all spread out (on the competing teams). You’re getting a chance to play against the best players in the world.”

Taylor recalled losing 14-0 to the No. 2 ranked New York Gremlins, who earned some big victories over other clubs as well en route to capturing the ISC championship.

“A lot of the big teams that travel, they’re playing in six or seven tournaments a year and we just can’t do that with our guys who have young families and work.”

Cobourg didn’t have its full lineup available for the Bradford/Cane Memorial Tournament as five players were competing in the event for their junior team – the Cobourg Bulls.

After a three-week break, the Cobourg club will compete July 12-14 in Au Sable Forks, New York during the 57th annual fast pitch tournament there followed by the annual Grafton Fastball Tournament July 19-21. Dirt Road Co. will again be without the junior players in Grafton as they compete for the Bulls.

“We don’t get to have the whole team all the time, just with the guys being junior,” Taylor said. “That’s another reason we picked up the Au Sable tournament was because it’s a weekend the juniors are off and a chance to get the whole team together again before the Worlds.

“It’s not easy when you can’t play together all the time,” he added. “No matter how good the team is, you want to have reps to build the team camaraderie, but the big thing with our team is all the guys pretty much know each other.”

Taylor does consider it a benefit for both the junior players and the Dirt Road Co. team to have the Bulls compete at the Cobourg and Grafton tournaments.

“It’s always better to have more teams than one loaded up super team going into a local tournament,” he said. “You have more competition plus it’s good for the fans because they get to watch a couple local teams.”

Tournaments are important for the local players due to the lack of competitive leagues to play in. Long gone are the days of the Cobourg Town League and even the Peterborough City League folded in May prior to the start of its 99th season due to a lack of teams. Oshawa and Pickering are now two of the closest options for local players.

“There’s not really a lot of leagues around for guys to get in so that’s why it was nice to get the first weekend in Cobourg before we played in Ingersoll,” Taylor said. “It’s not like it used to be where you’re playing in the City League a couple nights a week or back in the day when we had the Cobourg Town League going.”

“I think it’s the best team I’ve ever had together as a Cobourg Dirt Road Co. team,” Shane Taylor said. “We all get along, we still enjoy the game and it’s an opportunity for the guys to still get together and play.”

Players such as Buttar and Leblanc have competed for other teams, such as Waterdown and Scarborough, at the ISC World Tournament while Jake Taylor has also suited up for Scarborough.

Trude, who is from Peterborough but played in the Cobourg league and with current teammates on other clubs, has won an ISC championship with the Toronto Gators.

“I always wanted to get as many local guys as I could on the team,” Taylor says, noting there’s a great mix of veteran and young players who want to play fastball.

Maguire “really wants Cobourg fastball to come back,” he added.

Taylor appreciates the support of main sponsor Cobourg Dirt Road Co. and is also thankful for Ontario Line Clearing for reaching out to sponsor the team after they qualified for the ISC World Tournament.

That support aids the team in their bid for strong competition.

“We’re just trying to play against the best teams that we can,” Taylor said.