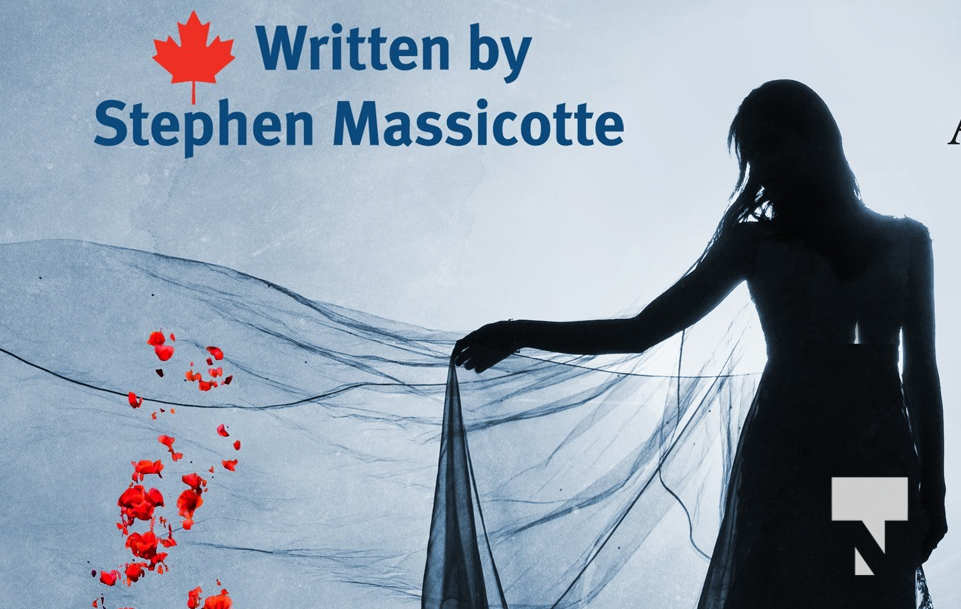 Cecilia Nasmith/Today’s Northumberland
Northumberland Players has found a most apt vehicle to kick off its 2018-2019 season and, more appropriately, its contribution to the Armistice 18 commemorations in Cobourg.
The centennial of the Armistice that ended the First World War is being remembered, and Mary’s Wedding – now playing in the Firehall Theatre – looks at the toll of that war on the young lives of Mary and Charlie.
Mary is played by Claire Russell, familiar to local audiences virtually all her life. Josh Lambert, who plays Charlie, has been involved with Northumberland Players for only a few years. His clean, simple good looks are well suited to the role of a gallant if somewhat naive young Canadian.
Charlie kicks the production off by explaining that the entire play is the dream Mary had the night before her wedding in July 1920. Throughout, Mary’s dream will encompass the couple’s meeting in a barn during a thunderstorm, their tentative blossoming love, Charlie’s leaving for the Great War with Lord Strathcona’s Horse Regiment, and his heroism when thrown into battle.
And perhaps only in a dream could pretty young Mary at certain points in the drama assume the persona of Charlie’s commanding officer Lt. Gordon Muriel Flowerdew (an actual Victoria Cross recipient). But even in a prim white nightgown, she manages the transition.
For so many centuries past, patriotic but naive young men have gone to war with unbounded excitement, and Charlie is no exception. And the girls who love them (like Mary) have felt bewilderment, anger and despair. Whenever life seems threatening (be it thunderstorms or enemy fire), Charlie finds comfort in reciting the only poem he remembers from school, Alfred, Lord Tennyson’s Charge of the Light Brigade. But Mary takes little comfort in recalling that the classic piece memorializes an ill-fated charge in which 600 patriotic men rode valiantly but futilely into the jaws of death.
As he welcomes the audience, Charlie notes that Mary’s dream begins at the end and ends at the beginning. The story does not unfold in a smooth and linear way but, if you relax with it and follow it on its own terms, you’ll find it comes to a very emotional and heartfelt conclusion.
Well-chosen sound and light effects put the audience into the thick of battle with an enemy that seems to have an unending supply of deadly ordnance. The sound and light crews include Tim Russell (Claire’s father), Victor Svenningson, Lynne Templer, Rebecca Summers and producer Maureen Holloway.
The compact set (designed by Tim Russell) serves as foxhole, battlefield, troop ship and barn. Without a change of costume, Claire Russell and Lambert skillfully make it work through dialogue and the choreography of their movements.
The venue must also come in for comment. The Firehall Theatre shines in intimate productions such as this one. In her final soliloquy, Russell stands less than a meter from the front row, so close that the tears shining in her eyes are clearly visible. These tears were answered with the tears of several audience members.
In her introduction to the play, Holloway reminded audiences that the Cobourg commemoration is thought to be the biggest centennial observance of the Armistice in Canada, and that two more Northumberland Players that come along in October are part of this occasion.
The Stars On Her Shoulders was (like Mary’s Wedding) written by Stephen Massicotte. This story examines the effects of their work on a group of Nursing Sisters with the Canadian Army Medical Corps. It will be presented as a staged play reading in the Victoria Hall Concert Hall at 8 p.m. Oct. 18 and 20 and on Nov. 8, with 3 p.m. readings Nov. 4 and 10. Tickets are $17.50.
Last Day, Last Hour will be performed in Victoria Hall’s Old Bailey Courtroom. Hugh Brewster’s play is about the real-life trial that ensued when Sir Arthur Currie (the general who led Canadian troops to victory in 1918 with the caputre of the Belgian town of Mons) sued the Port Hope Evening Guide for its allegaiton that he was reckless with the lives of the young men in his charge. The actual trial took place in the very courtroom where this play will be performed at 8 p.m. Oct. 9, 20, 25, 26 and 27, and on Nov. 1, 2, 3, 8, 9 and 10 There will also be 3 p.m. shows Oct. 21 and 28 and on Nov. 4 and 11. Tickets are $27.50.
As for Mary’s Wedding, it continues at the Firehall Theatre at 8 p.m. Sept. 27, 28 and 29, and on Oct. 4, 5, 12 and 13. There will also be 3 p.m. shows Sept. 30 and Oct. 14. Tickets are $23.
In all cases, tickets are available at the Victoria Hall Concert Hall box office, and handling charges apply (www.concerthallatvictoriahall.com or 905-372-2210).