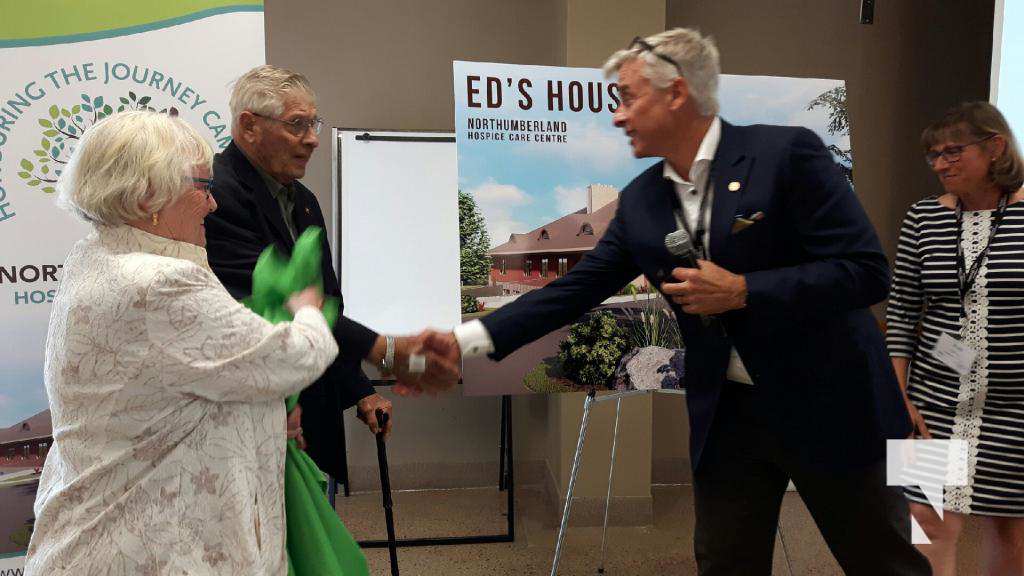 Cecilia Nasmith Photo – Ed and Diane Lorenz accept thanks from West Northumberland Hospice Care Centre fundraising campaign chairs Gord and Patti Ley at their big launch last week in Baltimore. The $1.5-million gift from the Lorenzes occasioned a new name for the facility in recognition of their generosity.

Cecilia Nasmith/Today’s Northumberland
Councillors who attended last week’s fundraising launch for the West Northumberland Hospice Care Centre – now known as Ed’s House after the project’s single biggest donor – were amazed at how close it already is to its goal.
“I would like to thank the Lorenz family for their significant contribution,” Deputy Mayor John Henderson said at Monday’s council meeting, acknowledging the $1.5-million given by Ed and Diane Lorenz. He also singled out the Read-Elliott family for their $1-million gift.
When the $9.3-million fundraising goal was announced, Henderson said, “I was gobsmacked with the news that they have already raised $8.1-million. That’s simply outstanding.”
“I am quite glad they did get a large amount to start with, and I offered to do a fundraiser Oct. 20,” Councillor Forrest Rowden announced.
“It’s a dinner and dance at the Baltimore arena. We will try to raise a few thousand dollars on that date.”
Meanwhile, Henderson said, now is the time to donate.
“I urge you, if you have not made a contribution, to please consider doing so.”
“I do hope every citizen can give a little bit,” Councillor Brian Darling stated.
“We have a fabulous community – the amount of money that has been raised for palliative care is an important part of a humane society,” Councillor Suzanne Seguin said.
“My mother spent time in a hospice, and the level of care was second to none, so I’m really hoping this is built and well used.”