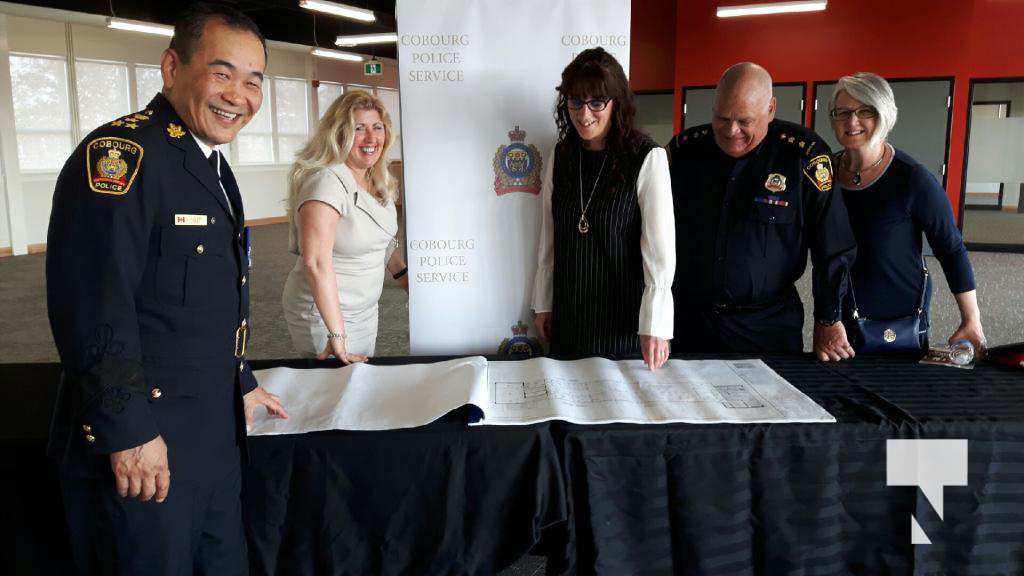 Cecilia Nasmith/Today’s Northumberland
With the piping in of a line of dignitaries, Venture 13 had its official opening Thursday – potentially kicking off a new era in economic development.
“It’s a great day for Cobourg and all of Eastern Ontario,” Mayor Gil Brocanier declared in the packed lecture hall of the edifice formerly known as Building 13 Northam Industrial Park, And it comes along only 24 months after discussions began with the Northumberland Community Futures Development Corporation.
From there, the partners came aboard – Northumberland-Quinte West MP Kim Rudd, Fleming College, Durham College, the University of Ontario Institute of Technology, Northumberland Makers and Northumberland Manufacturers Association among them. Now Venture 13 is a state-of-the-art innovation and entrepreneurship centre, a hub to incubate and accelerate technology start-ups as well as space that is available for community events and a home to existing organizations (such as the town’s economic-development department and anchor tenant Northumberland Manufacturers Association, which co-ordinates, assists and provides training for manufacturing endeavours).
“One stop to provide all the resources to give new and young tech businesses the opportunity for success,” the mayor summed up.
“It also creates well-paying jobs for our citizens and helps offset tax requirements for the Town of Cobourg.
“The possibilities are endless.
“We are at the age of technology – you either move forward with strength and confidence in our future, or we will be left behind,” Brocanier warned.
Cobourg Police Services Padre Andrew Truter asked a blessing on “the innovators, the inventors, the dreamers, the curious who have come to push the boundary,” asking that their only fear not be the possibility of failure but the inability to press on further.
Details about what shape this project has taken were shared by CFDC executive director Wendy Curtis and Cobourg’s chief administrative officer Stephen Peacock.
The work of the CFDC involves financing strategies for entrepreneurs and business development, but Curtis said they were looking to establish more collaboration with the town to ensure more good ideas were nurtured into successful enterprises. She took her ideas to the town March 13, 2017, and offered a vision of the possibilities – 3D printing and imaging, robotics and automation.
The CFDC has learned that start-ups have certain needs to produce success – early-stage risk capital, expertise and mentoring, a soft landing with shared technical workspace and resources, and a community of entrepreneurs, investors, industrial partners and advisors to support them. Cobourg also has the added advantage of proximity to Toronto.
Peacock stated his belief that a healthy community is home to all ages. Venture 13 can help that happen, he said, by providing a one-of-a-kind asset to today’s young people who wish to pursue an entrepreneurial future. He described a perfect storm of opportunities that led to Venture 13, starting with the building. It was built as the headquarters for the Canadian Forces Station Cobourg supply depot and was later a key building for the local school board before the amalgamations of the 1990s.
It stood vacant once the Transcom call centre left in 2011, and its upkeep cost the town $70,000 a year (even empty). At the same time, a coalition of innovation-focused organizations was seeking a joint operational centre, while the need for more post-secondary educational opportunities was being felt and a Federal mandate to develop technology-driven innovation was evident.
The ground floor consists of an Innovation Commons, Makers Lab and Venture Zone, ideal venues for public events, interactive workshops, technology demonstrations, lectures and seminars. Already, 190 bookings are on the calendar (like the Maker Daycamp in June for young people aged nine to 12 and the sixth annual N100 competition for young entrepreneurs in September), and there is a state-of-the-art reserve-and-pay platform. Peacock expressed confidence that the cost-recovery features of Venture 13 will make it self-sustaining.
Curtis pointed out that the Venture Zone provides exactly the kind of soft landing young entrepreneurs need, “a contemporary collaborative workspace for a comunity of innovators and entrepreneurs, a platform for creating acceleration.” (NORTHUMBERLAND TODAY Cecilia Nasmith Among the features of the Venture Zone at Venture 13 is the Flex Office, an office space that any of its clients can use)

The Maker Lab is a place of prototyping and engineering, microfactory production by Venture Zone clients during the day. After hours, organization members pursue their own work with 3D printers, laser engravers, vinyl cutters, and circuit printers.
On the second floor, Cobourg Police Chief Kai Liu said, a 15,000-sq.-ft. space will be dedicated to the Cobourg Police Services Corporate Services division – with police operations remaining downtown – and a lounge area will allow them to host meetings and functions.
The division’s primary business has been Canada-wide criminal-background checks, and it is a growing enterprise. The only reason they haven’t hired more people is lack of space at the downtown headquarters. That will change, and their corps of 12 corporate-service employees is expected to quadruple by 2022.
Chief Liu said they have already made good use of the lecture hall by lining up a training session. “We can hold police training here. Instead of sending officers to the Ontario Police College, it will send an instructor, and police services of the region can come here,” he said.
The Cobourg Police Service is almost unique in this kind of partnership, the chief added.
Lakefront Utility Services president and chief executive officer Dereck Paul explained some of the green features of the building, such as its portals to plug in electric cars with fully green solar-generated power. There is also high-speed fibre broadband connectivity with unlimited capacity and speed.
And if approval is achieved, they hope to install solar panels on the roof that will take care of about one-third of Venture 13’s power requirements.
Rudd offered congratulations in a video, along with Minister of Innovation Navdeep Bains, then offered her own remarks in person.
“Innovation is simply the convergence of intellect and ingenuity,” Rudd said.
“For the last two years, I have spoken about the undeniable rural renaissance taking place in Eastern Ontario. The jobs of tomorrow are taking place here today.
“There will be companies across the region that are making world-class advancements right in our own back yard. This is about celebrating the ones we have and the ones we know we are going to have. (NORTHUMBERLAND TODAY Cecilia Nasmith Among the features of the Venture Zone at Venture 13 is the Phone Room, a comfortable private space for making telephone calls)

“Under one roof, we will witness collaboration that will help chart a course for dynamic advancement that may even – and I suspect that it will – have global impact,” Rudd predicted.
“I believe history will indeed be made here. We cannot afford to be bystanders to progress. I think this day is truly about history and about making history – it’s about legacy as much as it is about the future.”
Curtis said that future includes children inspired by technological possibilities, thanks to the Northumberland Maker camps that let them dabble in everything from Lego to robotics and inspire an interest in the larger technical possibilities.
“We need to give them the chance to touch and feel and tinker and learn and create,” she said.
In addition, Curtis noted they have commitments from 12 companies to be at the facility, accounting for 17 jobs.
“I am very optimistic the business community will embrace the facility, and also the community at large,” she said. Her CFDC colleague John Hayden, manager of enterprise programs, announced that their N100 competition is now headquartered at Venture 13.
The competition began in 2013, and September will bring the sixth annual edition with a few changes on the horizon.
“Every year we have managed to attract 30 to 40 of the most exciting up-and-coming technology entrepreneurs,” Hayden said.
“We have made a name for ourselves. We have an incredible brand. We have put Northumerland on the map as a community that will support them from the beginning.”
Hayden said this will now be a competition that runs every other year, and a new prize is now available – the $2,500 Audience Choice prize made possible by CCO Productions.
Application forms are available at www.n100.ca, and the deadline to enter is July 13.