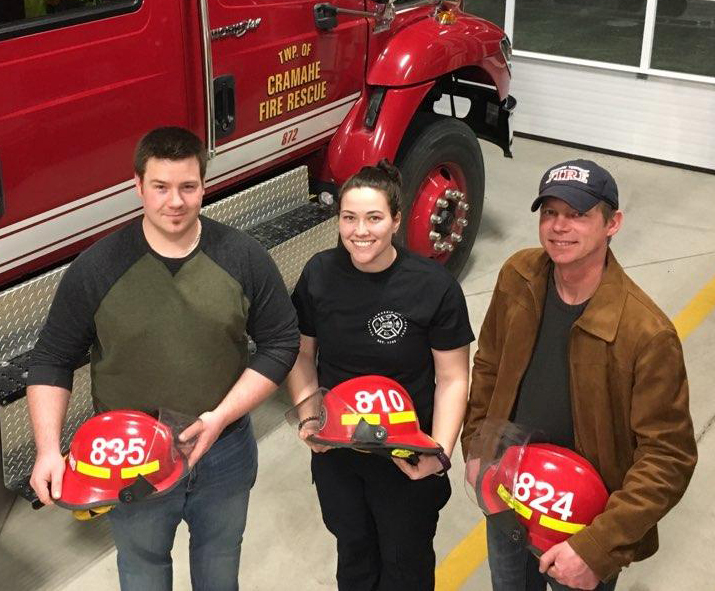 It’s a proud moment for Cramahe Township Fire Department leading the way in diversity among the fire service in Northumberland County
Firefighters Mark Williams Smyk Sambor and Chelsea Dempsey were all promoted from firefighter to Lieutenant on March 1, 2018 at the Cramahe Township Fire Department in Colborne.
Williams works part-time as a Northumberland County Paramedic, Sambor is a roofer who runs his own business along with speaking three different languages and Dempsey is a firefighter with Ontario Power Generation.
It’s believed the promotion makes Dempsey the first female operational officer among firefighters in Northumberland County.
As Lieutenants, the three officers will each be in charge of five firefighters (platoon) at a scene.
There are five platoons on Cramahe Fire Department with three in Colborne and two based in Castleton.
Fire Chief Brandon Northrup said he’s very proud of his three newest officers and his service leading the way across Northumberland County.
“We in Cramahe Township work very hard in what I call it, “proactive futuring.”
“We try to encourage staff. One way of doing that is we offer the Dalhousie University Fire Leadership program which Chelsea has completed.”
Dempsey has also nearly completed the Incident Command course.
“We offer these programs to the firefighters to try and get them ready if they choose to be an officer.”
As a officer, it’s not only being about a Incident Commander at calls, they are also tasked with other duties around the hall like truck maintenance, medical calls and administration.
In approximately five years Dempsey has been with the Cramahe Township Fire Department she has earned her spot as an officer and the respect of other firefighters.
“All three are a huge asset to us.”
Working at OPG Dempsey was awarded the Dan Merlin Award for top leadership and dedication in December 2017.
Diversity plays a key role to the Cramahe Township Fire Department.
“We have 30 firefighters, we service 6,000 residents, members in the department speak five different languages, we have 26% female staffing, we have two firefighters that practise sign language, we have up to 50% of the firefighters with skilled trades from plumbers, sheet metal, hydro line workers, arborists and more.”
“For a large incidents, who better to bring to a structure fire then people who build the houses or like Sambor.”
Medical calls take up approximately 50% of the emergencies for the fire service and with Williams being a paramedic it is another asset to the service.
“We’re building for the future with our fire service. Just like anything else the baby boomers are getting to the end of their career and when they leave their workforce, we will be prepared because we are being proactive today and into the future.”