Two Men Rescued After Falling Through Ice On Rice Lake 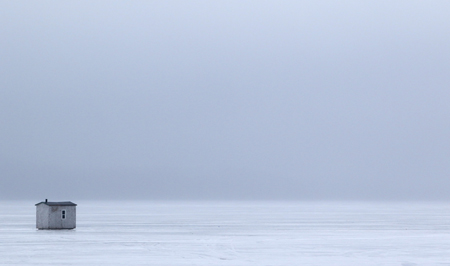 A day of ice fishing nearly turned tragic for two men who fell through the ice on Rice Lake.
John Ben-Oilel was sitting in his cabin when he heard the cries of two men on Rice Lake at approximately 9:25 p.m. on Friday, February 23, 2018 evening near Dunnette Landing Road by the boat launch in Alnwick/Haldimand Township.
The men parked their car near Ben-Oilel’s cabin around 1 p.m. and were out for a day of fishing.
“I heard them yelling and came outside and they were about 150 metres off shore.”
“They were in the water so I called 9-1-1.”
Alnwick/Haldimand Township Fire Department along with Northumberland County Paramedics responded.
When firefighters arrived it was confirmed two people were in the water.
Firefighters donning ice water rescue gear and taking a inflatable craft rescued the two men and brought them to shore while two ambulances were waiting.
“They were cold. They had a pretty good set of lungs.”
It was almost the same area where two men were rescued last year after falling through the ice.
Ben-Oilel has lived in the area for five years said people just don’t get the message.
“There’s a big current that runs through here. It looks alright on top, but there is rotten ice.”
Firefighters say the men are extremely lucky to be alive as they were not wearing survival suits
Both men are expected to survive.

Photo is of a fishing hut just off Bewdley taken on February 23, 2018