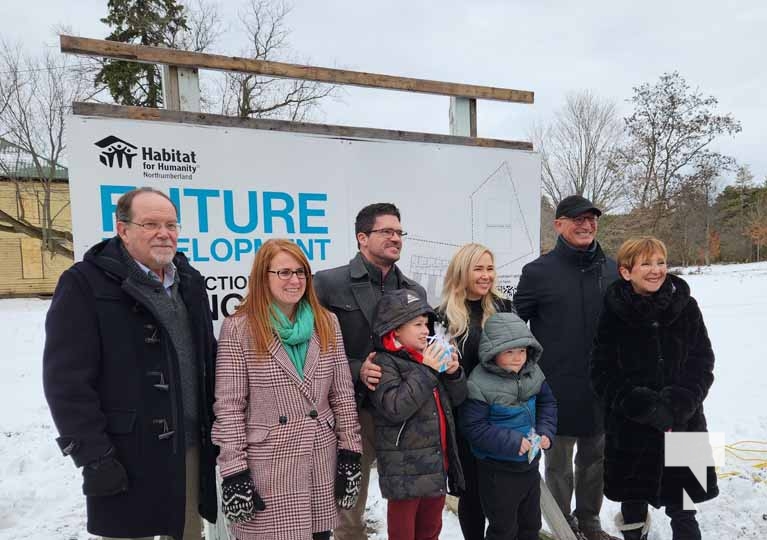 Every year for the past five years, Habitat Northumberland has acknowledged this day with the conclusion of the Anniversary Campaign. This year the campaign celebrates the 24th Anniversary of the affiliate. For the 24 days leading up to National Housing Day on November 22nd, sponsors were challenged to raise $24,000. And sponsors did not disappoint. This year the campaign achieved its goal of $24,000 with 15 sponsors, making the five-year total over $125,000.

“The impact of this fundraising campaign year over year is incredible. Those funds are going directly towards our build program, and they really make a difference in our ability to build local affordable housing,” explains Meaghan Macdonald, Executive Director.

Riccardo Trecroce, Board Chair of Habitat for Humanity Canada was on hand to impart greetings from the federation and to highlight a recent survey conducted by Habitat Canada and released just prior to National Housing Day. According to the survey, Canadians rank affordable housing as the third most important issue facing Canada today, behind inflation and healthcare.

The survey measured the perceptions of Canadians and also sheds light on growing concerns and barriers to homeownership including lack of housing supply, increased cost of living, discrimination, NIMBY (Not in My Backyard) sentiment and more. Trecroce said that, “National Housing Day is a day to not only better understand the housing crisis on a large scale, but to also to see where we, as an organization, can help.” Habitat for Humanity, both at the national and local level, is on the frontlines, advocating for safe, decent, and affordable places to call
home for Canadians across the housing continuum. To learn more about the survey, please visit https://habitat.ca/en/news/housingsurvey.

“The Board of Directors of Habitat for Humanity Northumberland has developed a three-year strategic plan for 2023-2025 with an overarching goal to broaden our impact and reach more people by adapting our service model, thereby facilitating housing stability, security, and empowerment across our region. We plan to do this by responding to the affordable housing shortage, by being an effective community partner, and by committing to maintain a strong, resilient, and sustainable organization,” says David Lester, Chair of the Board for Habitat Northumberland. “This
project in Baltimore is the ideal example of how we hope to put our strategy into action.”

We build strength, stability and independence through affordable housing.

Habitat Northumberland also announced that they are launching a capital campaign, Building Hope for Families, to raise key capital dollars to get this development started. The Pennington/Campbell family, led by Jacqueline Pennington and Greg Campbell, have agreed to chair the capital campaign in the community.

“We are so excited that Jacqueline, Greg, Robert and Elijah have agreed to help us with this campaign,” says Meaghan Macdonald, Executive Director. “It is so powerful that a family is coming together to help us build homes, and hope, for other families in our community. The need for affordable housing is overwhelming right now and we are so thankful to have leaders in our community like the Pennington/Campbell family to help us at Habitat try to address some of that need.”

Habitat Northumberland is hoping to break ground on this project in Baltimore in the spring of 2023. For more information and to get updates on the progress, please visit https://www.habitatnorthumberland.ca/4751-hwy-45-baltimore.