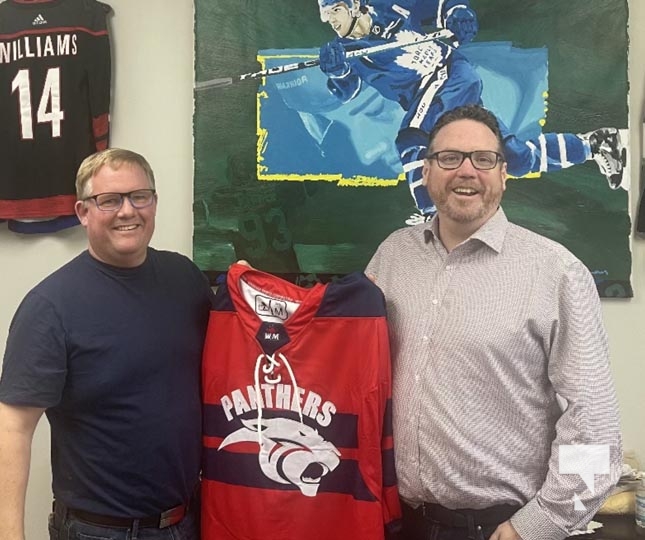 Port Hope Panthers junior C hockey will remain a fixture in the community thanks to a new local ownership group.

The process to purchase the team, which required approval from the Provincial Junior Hockey League, started early this year and was just recently completed. The new ownership group includes Shane Weatherby and Andrew Watson from W3 Group with 50 per cent share and Chad Stewart who runs the local successful National Shunt Service Ltd. (NSSL) company has the other 50 per cent.

Local retired NHL star Justin Williams is also an owner of W3 Group and is a great hockey mentor for the three new owners.

“It was a pretty cumbersome process with the length of it,” Weatherby said. “It took a bit longer than we liked, but about two weeks ago we finally got approval from the league that they accepted the ownership.”

Weatherby said the group was waiting as patiently as possible, but that was challenging as they couldn’t be involved in making any player transactions until the sale was approved. Since the sale was finalized, a number of moves have now been completed.

As previously reported by Today’s Northumberland, the Panthers have traded Nolan Stevenson to the Amherstview Jets, but acquired a number of new players from different teams, including Connor MacGregor, Josh Sainthill, Logan White and Isaac Langdon.

Weatherby believes it’s important for the Panthers to have local ownership and have a strong connection to the community, which he hopes will only be further strengthened with this purchase. His friendship with Stewart goes back to their youth.

“Chad actually is the one that spearheaded this,” Weatherby said. “He came to me and said ‘hey do you want to buy a hockey team?’”

They looked at options locally and promptly reached an agreement with the former owners of the Panthers. Weatherby has a passion for hockey, from growing up playing the sport and continuing to be involved in some way.

Whether it’s minor hockey, from the youngest to oldest participants, junior hockey or NHL, Weatherby said being in an arena is his happy place.

“I just enjoy being there,” he said. “In my downtime I love watching hockey, love the chess game you can watch when you see two teams playing. I said I always wanted to coach at a high level, unfortunately I got too busy with businesses to be able to get in that avenue right now, but I enjoy the ownership side of it. It is a business and building the team up and a great place to start for us is junior C.”

Owning a junior hockey team has never been considered a big money-making opportunity. It’s often a losing venture. The new Panthers owners would like to change that.

“I would call it four quarters for a dollar, for sure, but Chad and I are pretty innovative and it is a business so we would like to see five quarters before it’s all done,” Weatherby said. “We’re working toward some different ways to implement the team and make it a local community thing. Obviously make some money as well, not easy in the hockey world, but it’s a fun business and as far as any business – the buy, the sell – it’s the same with hockey players trying to get your team better. Junior C is a little harder because they’re not paid hockey players so it’s blending a team and finding new players. You have to find the right mix.”

Beyond the staff and players, the backbone of junior hockey franchises are volunteers and that’s certainly the case for the Panthers on game days.

“You really appreciate and you see the passion,” Weatherby said. “Yeah we bought a hockey team, but you’re not paying employees to be there every day so you really appreciate the people that have a passion for the game that are helping and really without them you wouldn’t be able to run the team.”

They both find enjoyment in building a hockey team.

“The kids are starting to gel and we’re seeing some wins, so that’s good,” Weatherby said, adding the ownership group has goals for the players on and off the ice.

“Our biggest thing right now for the Panthers, we’d like to see them help funnel some talent to junior A and then we obviously want to be known as a group or team that educates, takes our players if they’re not playing hockey anymore and gets them into the business side of life.”

They also hope to move players on to U.S. college hockey, whether that’s through Division I, II or III scholarships.

“We have a network for that, so if our kids are interested in progressing and getting into school and scholarships, we’re going to help facilitate that. I think as a junior C club, not many are doing that right now, but we will,” Weatherby said.

For this season, the owners would like to see great progression from the core group of players. Their ultimate goal is to win the PJHL’s Schmalz Cup championship. The Panthers made three straight runs to the Schmalz Cup final from 2015 to 2017, but were unable to capture the championship.

“I did see the runs they had and spent a lot of time watching and following them,” Weatherby said. “I didn’t really have an intention of owning them one day, but we’re pretty proud now and look forward to assembling and getting the team on a winning note.”