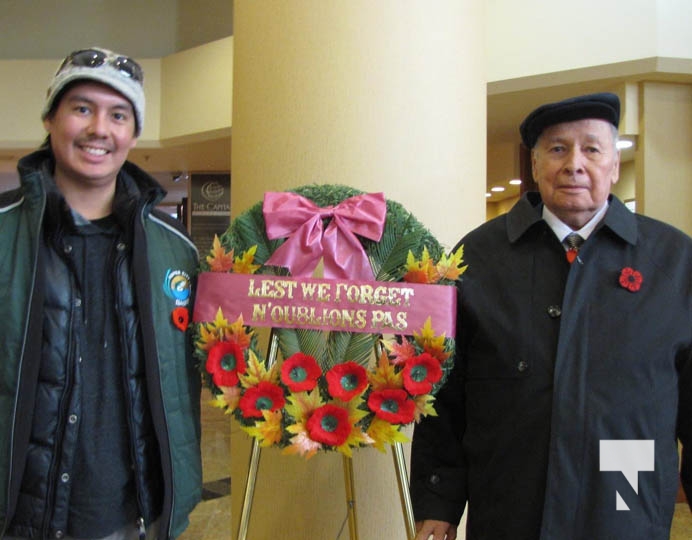 Indigenous Veteran’s Day is November 8th.
Marsha Smoke submitted this article she wrote about her father which we are proud to share.

After his family left the Alderville Reserve in 1937, his journey away from the only place he knew as home, began during the Depression as his family moved around the eastern townships of Northumberland County. The Smoke family’s journey took him, first, to the Myersburg area, and other small towns and villages before they made it to Brighton where he was enrolled in elementary school. Eventually the family moved on to the Colborne area, Grafton and then finally settled in Cobourg.

When Don was 17, he decided to join the Royal Canadian Army and was enlisted at the 15th Regiment in Petawawa. He was a Gunner and was known for his accuracy as a nine-mile sniper. He served in Belgium and the Netherlands. After the war ended in Europe, he signed up for active duty in the Pacific. Japan would surrender and World War II would come to an end before he would set sail.

Meet Eric Brunt, a young film producer from Victoria, BC. Earlier this year, Eric reached out to Veteran Don Smoke and asked if he would share his story and interview him for a future documentary. What transpired after that was an amazing journey that no one saw coming.

With the original Legion in Cobourg recently demolished, the Producer contacted the Royal Canadian Legion in Brighton to ask if they could use their grounds to interview a WWII Veteran. The short trip from Alderville to Brighton was a journey through time. Across the rolling hills of Northumberland County Veteran Smoke pointed out significant places of interest from his younger years, where he once lived, where our relatives lived, where he went to school and areas where he would hunt and trap. Little did the Producer know that Brighton was once Don Smoke’s home and traditional hunting territory.

On the day that the film crew arrived from Toronto, the Legion was busy with their Saturday activities. They were quite excited to hear that a WWII veteran was in their presence. The Sergeant-at-Arms informed us that Brighton no longer had any living WWII veterans and that their annual Remembrance Day event had become an even more special ceremony for that reason.

The members of the Brighton Legion asked if Veteran Smoke would be kind enough to join them before he travelled back to Alderville. After a long afternoon of filming, he would make one more stop to pay his respects to those at the Legion. As the door opened, it was quite the contrary. As Veteran Don entered the room, a standing ovation, cheering, and impromptu messages became quite an emotional moment that took everyone by surprise.

Retired veterans from more recent conflicts including Afghanistan and a retired Brigadier General, lined up to shake Veteran Donald Smoke’s hand to thank him for his service. They were equally surprised to learn that he is a former resident of Brighton, and now, a WWII veteran who is still with them today.

November 11th in Brighton promises to be a special occasion this year. WWII Veteran Don Smoke will be the guest of honour in the 1st Position at their Remembrance Day Ceremony. As the parade moves along the route, troops will turn to Veteran Smoke and salute him as they march by. Friends and family and all are welcome to join us for this very proud moment in time.

On November 6th, he will attend the Veteran’s Luncheon and meet veterans from other tours of duty, their families and Brighton community residents.

When the young filmmaker from the west coast finally met up with a Michi Saagiig First Nation veteran in the summer of 2022, both had their dreams fulfilled that day. At a young age living in Brighton and now later in life, Don Smoke’s return to Brighton brings him full circle to another place where he once called home. It was an incredible honour and show of respect from strangers who are now his friends. This is just one chapter of this veteran’s amazing life journey.

Don Smoke has lived a good life. He is proud that he served his country. In his own words, “I went to war to preserve my liberty and rights. No one is going to push me around.”

He is proud of his accomplishments, his working career, his family, and the acres of land around him that he calls home. Every day, the memory of his wife June, who travelled on to the Spirit World in 1985, surrounds him with love and photos of the beautiful life they built together.