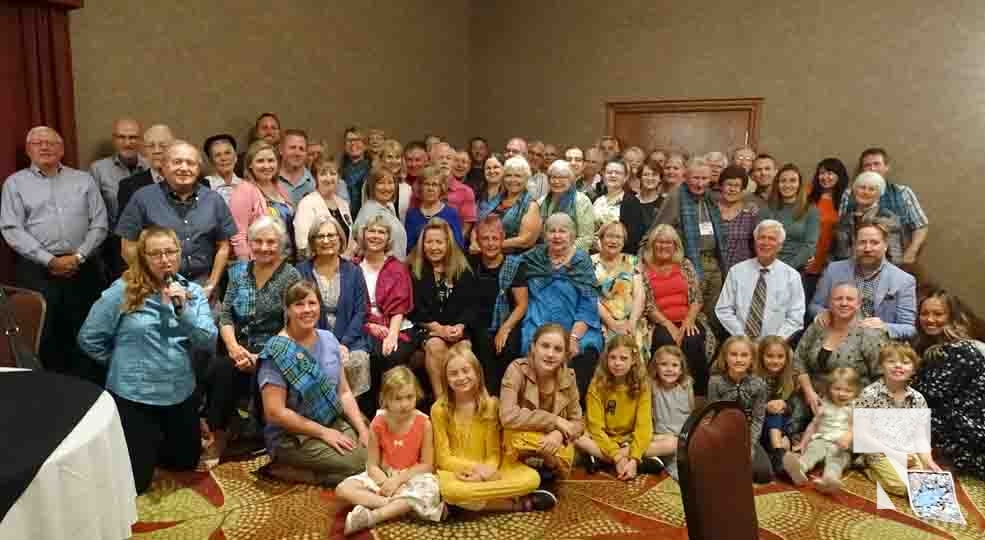 By Cecilia Nasmith/Today’s Northumberland
A sizeable contingent of the descendants of a significant Cobourg family made their way back to town Sept. 16 through 18 for a reunion.

That would be the Jeffrey family, descended from one of the town’s early mayors, Andrew Jeffrey, who would leave his mark as a businessman and early community leader, even helping Canada emerge from a colony to a Dominion.

Descendant John Cowan shared some family history that began when Jeffrey arrived on these shores from Scotland. It was 1820, and the 20-year-old newcomer was accompanied by his mother and sisters.

Two hundred two years later, his descendants would be back in town to explore Cobourg (and Jeffrey) history and view locations significant to both.
The family had planned to have the big reunion two years ago, during the bicentennial of Jeffrey’s arrival, but COVID-19.

Cowan credited a core group of seven family members who organized the event, with the assistance of other family members roped in to do specific tasks. They were also assisted by Gerry Brown of the Cobourg and District Historical Society and architectural historian Rob Mikel. The Northumberland and District Archives helped identify significant locations, and the Cobourg Public Library provided ready access to much information about the town and the Jeffreys’ influence.

Andrew Jeffrey had nine children with Janet Hall before she died, then four with Agnes Moscrip (McLenhan) before his own passing in 1863. His four sisters married into the Gillespie, Grigg, Hall and Short families, producing 31 more children. These early 44 second-generation-Canadian Jeffreys scattered across Canada and the US, and only a small fraction of their large flock of descendants could make it to the grand homecoming in Cobourg. In fact, none of them still reside in Cobourg, Cowan said – the closest ones are in Peterborough.
Cowan provided a list of milestones for the Hon. Andrew Jeffrey
1832 – Operated a local school for boys and girls at King and D’Arcy
1833 – Founding elder and trustee at St. Andrew’s Presbyterian Church
1837 – Appointed by the town to petition government to amalgamate Amherst with Cobourg incorporate the Town of Cobourg
1837 – Elected to the first Cobourg Police Board before formation of a town council
1845 – President of the Management Committee of the new Cobourg Board of Trade
1849 – A Cobourg Justice of the Peace
1849 – Chair of the Cobourg and Rice Lake Plank Road and Ferry Company
1851 – Cobourg Town Councillor
1852 – Cobourg Mayor
1852-1863 – President of the Board of Trustees of the Northumberland and Durham Savings Bank
1859-1863 – Chair of the Commissioners of the Cobourg Town Trust
1860-1863 – Elected member of the Legislative Council of the Province of Canada representing the Newcastle Division
At the time of his funeral, Cowan said, a newspaper report said that “the places of business in town were closed from noon to 2 o’clock, in token of respect to the departed.”

In all, 71 family members attended the reunion from far and wide – Florida, California, Washington state, British Columbia, Alberta and Nova Scotia, as well as many from Ontario.

The family is grateful to Rob Mikel for his guided tour of points of interest and his wonderful historical summary that was a valuable addition to their own research.

“We tried to fill in the basic information about what was going on in Cobourg at the time the family settled and roughly the first 50 years there were there, just from our own knowledge and research on Cobourg and the family,” Cowan said.

“It’s interesting, when you are doing genealogical research, you get dragged into history and what was going on at the time. Everybody enjoyed the summaries of the history of the family.”

Another distinguished guest was Cobourg Mayor John Henderson, and one highlight of the event was the bagpiper of the family helping advance the proceedings from the Best Western lounge to ballroom at the appropriate time.

“That told everybody in the hotel what was going on,” Cowan said.

“And he played outside St. Andrew’s before the worship service on Sunday, and we were warmly received in the church too.”

Along with the typical family-reunion traditions – like prizes for most-traveled, oldest present, youngest present – the Jeffrey family version featured a special crossword puzzle and a Who Am I slideshow that offered clues along with the historic photographs for Jeffreys to guess at. But the biggest focus, Cowan said, was visiting

“We are really talking about family and getting together, and the most important thing was meeting everybody.”

He recalls his three- and seven-year-old grandchildren, along with the other little ones, having the best time meeting second and third cousins they never knew before.

“A great time was definitely had by all ages,” he declared.