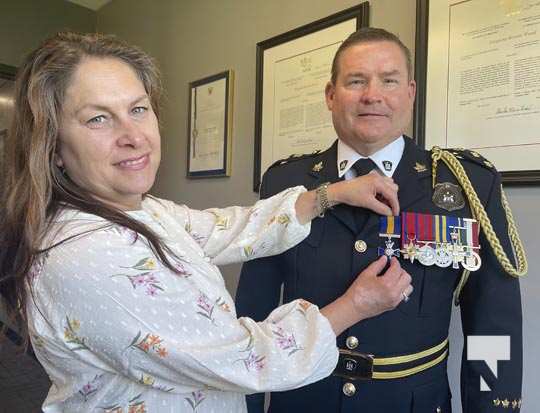 The Municipality of Port Hope and Port Hope Police Services Board (PHPSB) have received notice from Police Chief Bryant Wood of his intention to retire in the first half of 2023.

“I have been extremely privileged to have served the citizens of Ontario for 30 years as a police officer, 29 in the Municipality of Port Hope,” notes Chief Wood. “For over 8 years I have been very proud to have led the members of the Port Hope Police Service who are a hardworking and professional group. I look forward to spending more time with my family and pursuing other interests and opportunities in the years to come.”

Chief Wood began his policing career with the Ontario Provincial Police in 1993. In 1994 he joined the Port Hope Police Service and was appointed Chief 20 years later in 2014.

Throughout his career, Chief Wood has received several awards and recognition for his service to the community. In 2008, he was awarded the Ontario Medal for Police Bravery, the highest decoration for bravery in Ontario by the Lieutenant Governor. In 2010 he was awarded the Star of Courage, the second highest bravery decoration in Canada by the Governor General. That same year, he also received the Medal of Bravery, the third highest bravery decoration in Canada by the Governor General. In 2013 he was recognized with the Police Exemplary Service Medal, awarded by the Governor General, and received a Long Service Medal by the PHPSB in 2017. Most recently, Chief Wood received the Order of Merit of the Police Forces in 2021, the highest decoration for policing in Canada by the Governor General.
“Chief Wood has provided exemplary service to the Urban Area of Port Hope and cultivated strong and lasting partnerships within our community,” states Bob Sanderson, Mayor of the Municipality of Port Hope. “He has been devoted both professionally and personally, serving on various boards and committees, and volunteering his time for various organizations and activities. We thank the Chief for his long service to our community and look forward to celebrating his retirement in 2023.”