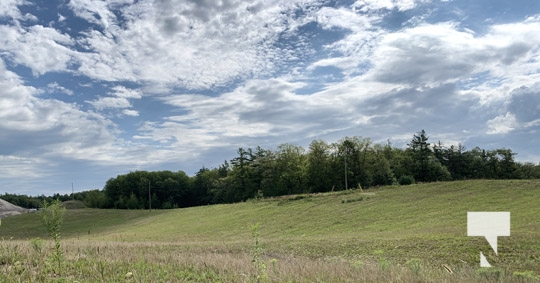 CBM Aggregates’ Shelter Valley Pit in the Township of Alnwick/Haldimand has received OSSGA’s 2021 Progressive Rehabilitation Award, presented at OSSGA’s 2022 Conference & AGM at the end of February.

Shelter Valley Pit earned its first Progressive Rehabilitation Award for its success in transforming the extraction faces around its east and south perimeter and a portion of the floor into a naturalized forested area. The rehabilitation targeted 3.05 hectares of land and was completed in fall 2019. It required the placement of 3,000 cubic metres of overburden to obtain a 3:1 slope at the east face and grading the pit floor with 2,500 cubic metres of overburden. The slopes and floors were covered with six to eight inches of topsoil, and the site was seeded with a mix of native grasses such as big bluestem, little bluestem, poverty oat grass, forbes butterfly milkweed and hoary vervain. In May 2021, 500 trees were also planted by the Northumberland Tree Planters.

“We are very pleased to receive the OSSGA Industry Recognition Awards for Progressive Rehabilitation and Property Enhancement,” said David Hanratty, Director of Land & Resources, North America. “CBM Aggregates strives to achieve excellence in all aspects of our operations and we are so appreciative of the recognition from OSSGA in these two categories.”

The Progressive Rehabilitation Award recognizes the ongoing efforts of individual operators to progressively rehabilitate their sites in accordance with their site plans.
OSSGA Industry Recognition Awards Program
The OSSGA Industry Recognition Awards Program recognizes a wide range of activities that contribute to a progressive image of our member aggregate producers and the aggregate industry as a whole. A key goal is to raise the bar in the industry by highlighting operations that go above and beyond what is required by legislation.
“We encourage each member to strive for excellence in their operations, to be sound stewards of the lands on which they operate, and to be engaged and valued members of their community,” said Norm Cheesman, Executive Director of OSSGA. “All of OSSGA’s 2021 Industry Recognition Award winners have gone far above our expectations.”
A full list of winners can be found in the 2021 OSSGA Industry Recognition & Student Design Award Booklet and at www.GravelFacts.ca!
ABOUT OSSGA
The Ontario Stone, Sand & Gravel Association (OSSGA) is a non-profit industry association representing over 280 sand, gravel and crushed stone producers and suppliers of valuable industry products and services. Collectively, our members produce a large majority of the approximately 164 million tonnes of aggregate consumed annually on average in the province to build and maintain Ontario’s infrastructure needs. OSSGA works in partnership with government and the public to promote a safe and competitive aggregate industry contributing to the creation of strong communities in the province.