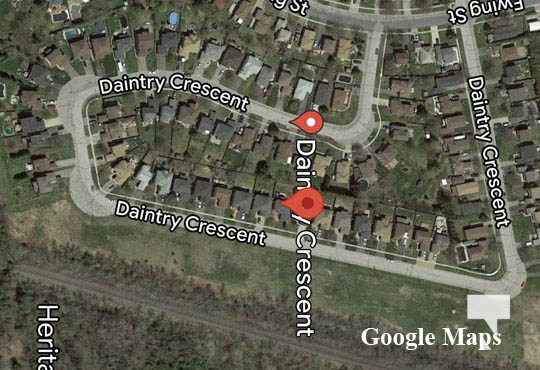 Prior to the vote, Daintry Crescent resident Michael Clark offered what he called “a little walk down History Lane” in relation to the property, located on the south side of the road parallel to the railway tracks.

He recalled that, in 1992, a townhouse development was proposed for this vacant land. The railway put the kibosh on it, citing noise and vibration complaints (as outlined in the protocols that do govern development close to a railway).

The land remained vacant, “modestly maintained” by the developer – until he defaulted on taxes and the town took it over. From there, maintenance went to twice-yearly grass cuttings by the town.

Daintry Crescent residents gathered in force in 2015 to oppose a solar-panel development proposed for the land. The applicant withdrew the proposal, and the residents lobbied for the land to be developed as a park.

“Everything was going nicely. Within weeks, a dozen loads of topsoil were delivered and leveled out. Some trees were planted,” Clark said, adding that maintenance by the town has become a weekly thing.

Until, over the past few weeks, they discovered the actual rezoning to a park designation had never actually taken place.

Councillor Emily Chorley’s motion addressed that discrepancy, calling for the land to be rezoned parkland in a timely manner.

Chorley’s motion also called for an accessibility audit for the park to ascertain upgrades most urgently needed to enhance accessibility (such as curb cuts). The motion also provides for a plan to be drafted and costed to cover new signage, trees, benches and pathways, to be presented to council by May 30.