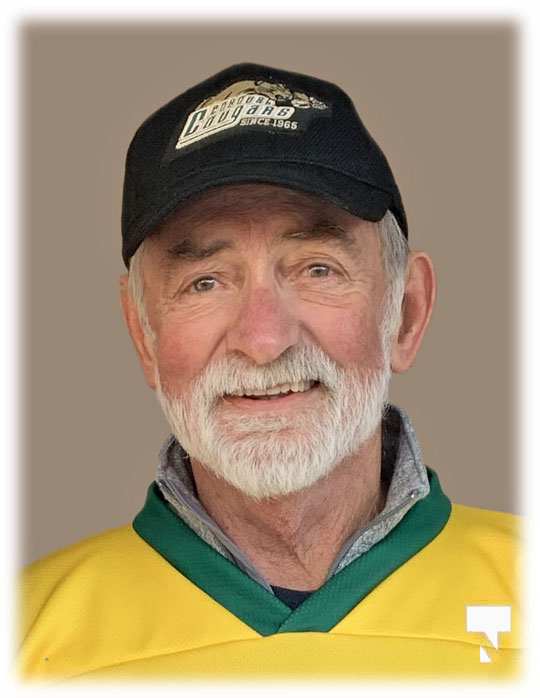 The Cobourg and District Sports Hall of Fame is deeply saddened to announce that Gord Brooks passed away unexpectedly Thursday October 1, 2020 at University Hospital in London ON.

Gord was elected this past March for induction into the Cobourg and District Sports Hall of Fame.

We offer our sincerest condolences to Gord’s wife Beth and all his family.

In Memory of Gord Brooks
1950 – 2020
Obituary of Gord Brooks
BROOKS, Gord – Suddenly and unexpectedly with his family by his side, at University Hospital in London ON, on Thursday October 1, 2020, at the age of 70. Forever loved by his wife Beth for over 44 years. Loving father of Bryan (Andrea), Cindy, Jennifer and Rachel (Brian). Proud Papa of Benjamin, Karissa, Keira, Matthew, Nicholas (Emma), Sarah, Emily, Matti, Taylor, Tyson and great granddaughter Sadie. Sadly missed by his mother Betty, his sisters Louise, Pam, Debbie and many nieces, nephews, extended family and friends. Predeceased by his father Edward and brother Paul.

Gord had a professional hockey career in the OHL, NHL, NAHL and AHL and then worked for London Hydro for 32 years. He enjoyed summers playing baseball with the Ted Dilts team with whom he created long lasting friendships. During retirement he enjoyed golfing, fishing, and helping his many neighbours. His most treasured moments were spending time with his grandkids making memories.

Gord Brooks was born in Cobourg on September 11, 1950 and has the distinction of being Cobourg’s first National Hockey League player. He played his minor hockey with the Cobourg Church Hockey League and spent the 1967-68 season with Cobourg’s Junior ‘B’ Cougars. Gord played his major Junior ‘A’ years with the Hamilton Red Wings and the London Knights. At the end of the 1969-70 season, Gord Brooks was drafted 51st overall by the St. Louis Blues and spent his first professional season with their farm team, the Kansas City Blues. From 1971 to 1975, Gordie played 70 National Hockey League games with both the St. Louis Blues and the Washington Capitals.

Visitation will be held on Wednesday, October 7, 2020 from 1:00 to 4:00 p.m. and 6:00 to 9:00 p.m. at NORTHVIEW FUNERAL CHAPEL, 1490 Highbury Avenue North, London, where the funeral service will be conducted on Thursday, October 8, 2020 at 1:00 p.m. Registration is required to attend the visitation and funeral service. Please note that the online registration system will become active on Sunday, October 4 at 1:00 p.m. The funeral service will be streamed online for those not able to attend in person. Those wishing to make a donation in memory of Gord are asked to consider The Heart and Stroke Foundation or St. Joseph’s Hospice, London.