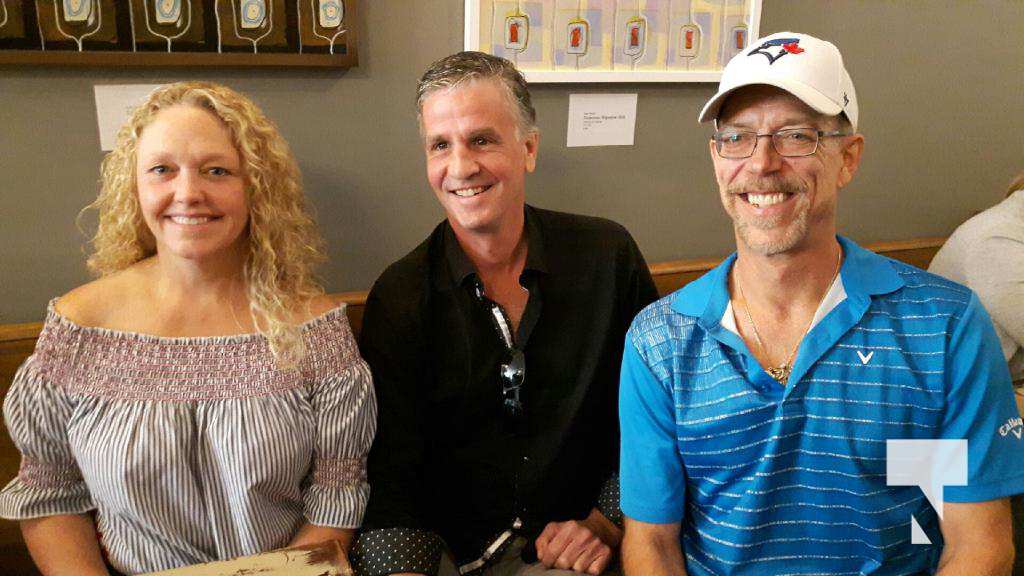 Cecilia Nasmith/Today’s Northumberland
A home-grown cannabis-oil production facility will soon open in Lakeport, an all-local operation by SharpShooter Industries Inc.
The SharpShooter company – whose principals are local residents – has purchased the old Anamet building in Lakeport, where it will commence operations following the current occupants vacating the site and requisite renovations (including security arrangements) being completed.
The announcement was made in Port Hope Thursday by chief executive officer Adam Dasovith of Cobourg, vice-president of corporate development Tracey Sewart of Colborne, and founder, board member and chief operating officer Scott Hamilton of Trenton.
The Anamet building is located at 118 County Road 31. SharpShooter took ownership Sept. 10. Renovations will soon be underway for all the requisite outfitting, including secuity.
Also in the works – becoming a publicly traded company. Not only are they gaining investors, Dasovith said, they’re also being approached by people wanting to be a part of it.
“We have probably $1-million in the bank, which we’ll be using to buy stuff and get the right people involved.”
Hamilton began the company about four years ago. They grow medicinal-grade cannabis and produce high-grade cannabis oil. With recreational use on the horizon, he added, that’s another market they plan to tap.
“We estimate, over the first few years, we will double our size,” he predicted.
Estimates of jobs that could be available vary, but it is agreed there could be as many as 30 to start and more to come when the expansions begin.
In case of significant expansion, of course, the plant might have to move because there’s not enough land on the lot they have purchased. In that case, Hamilton said, they’d hope to take their employees with them.
For now, however, he considers the Lakeport building perfect. There weren’t many places fitting the bill for what they needed, which made it so wonderful to find the one they eventually bought.
“A 30,000-sq.-ft. factory, big parking lot – we could do an expansion right away, because it’s pretty much level ground.”
“We plan to expand fast,” Dasovith added.
Dasovith said their team has the right experience behind them on both sides, product and corporate expertise.
And according to Health Canada statistics, sales of extracts are expected to outpace dry sales.
“Only 14 out of 61 licensed producers have the license to produce and sell extracts,” Dasovith noted.
“The SharpShooter focus is high-quality production of extracts, a consistent product with consistent quality.”
Stewart, who grew up in the Cramahe area, is delighted to see the company in her old stomping grounds.
“People like investing their money locally – it feels good,” she said.