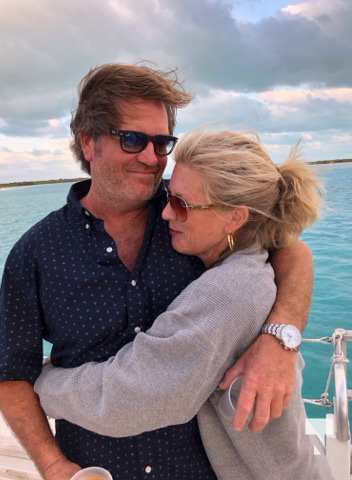 A loving husband and father of three is being remembered after an industrial accident in Port Hope on July 3, 2018.
John Mensen, age 57 died after being airlifted to a Toronto hospital following an accident at a farmhouse north of Port Hope.
At approximately 2:30 p.m. on July 3, emergency services were notified of a wall that had collapsed on top of Mensen on Dodds Road just north of Canton.
Responding emergency workers were informed Mensen may have been vital signs absent, but when they arrived he was in critical condition with crush injuries, but was not vsa.
The workers were in the process of repairing an old farmhouse.
Lesley Mensen spoke to Today’s Northumberland and said Mensen Construction had many jobs on the go. She described her loving husband of 27 years as a workaholic who had been in the construction business for 35 years..
“He was so loved,” said Lesley from her Colborne home.
The couple have three children, Alexa (age 26), Paigee (age 24) and Max (age 18).
Lesley said she got a call at approximately 3 p.m. on July 3 from one of Mensen’s employees at the job site.
“He said there was an accident and they were trying to dig John out. He was going to be transported to the Cobourg hospital so I called my son as I was going to pick him up on the way.”
While heading to Cobourg, Lesley was updated about the accident.
“I got a call from another one of our guys who said this is where the job site is. They have ORNGE air coming to get him and he’s going to be heading to Sunnybrook. So I grabbed my girlfriend and my son. I wanted to see him before they took off so I drove to Canton and when we got to Port Hope to pull off I saw the helicopter in the air taking off for Toronto.”
They immediately started heading for Toronto while notifying calling her daughter Alexa who was working in the city.
“She got to Sunnybrook and said they they had no bookings for ORNGE coming in. Then we found out it was St. Michael’s.”
“When we got to St. Michael’s, I should have known better when they take you into the room and they don’t take you to your husband.”
Lesley was told her husband had a heart attack from the wall collapsing on him and crushing his ribs. Initially he was vital signs absent at the job site, but was revived and airlifted from the scene.
On the way to St. Michael’s in the air ambulance or at St. Michael’s, John Mensen had another heart attack and passed away.
Mensen suffered no head trauma, but there was a lot of internal injuries from the wall collapsing.
A coroner’s inquest will be held because the accident was job related.
Lesley wants to share with people that they may hear her husband’s name for the first time in the news, but there was much more to the loving husband and father of three.
“I want the world to know what an awesome man he was.”
“I often teased him on his gravestone, I’d put “Really Great Guy.”
“He helped out everybody.”
“I know people say that all the time, and I don’t mean to put him on a pedestal, but he deserves to be.”
“He’d give anybody a hand – anytime.”
Mensen has a large family from the area of Colborne, Warkworth, Cobourg, Turks and Caicos and Dominican Republic.
Just a week ago Mensen was in Turks and Caicos with their daughter Paigee on a vacation.
The large family of relatives are a tight family who rally together when anyone is hurting or in trouble.
“They’re the best,” said Lesley.
She wants people to know her husband was a funny, family man who enjoyed life to the fullest.
“He took everything calm. He loved hanging out with his family, playing cards. Always made sure I had the best of the best.”
“It was his family that made his smile the most.”
“Sitting out here on our property overlooking the lake with family.”
“His kids really made him smile the most,” said Lesley.
“He was so loved. He touched so many people. He was a such grateful person and he taught me so much about life and happiness.”