Victims of Apartment Fire Frustrated At Lack of Information 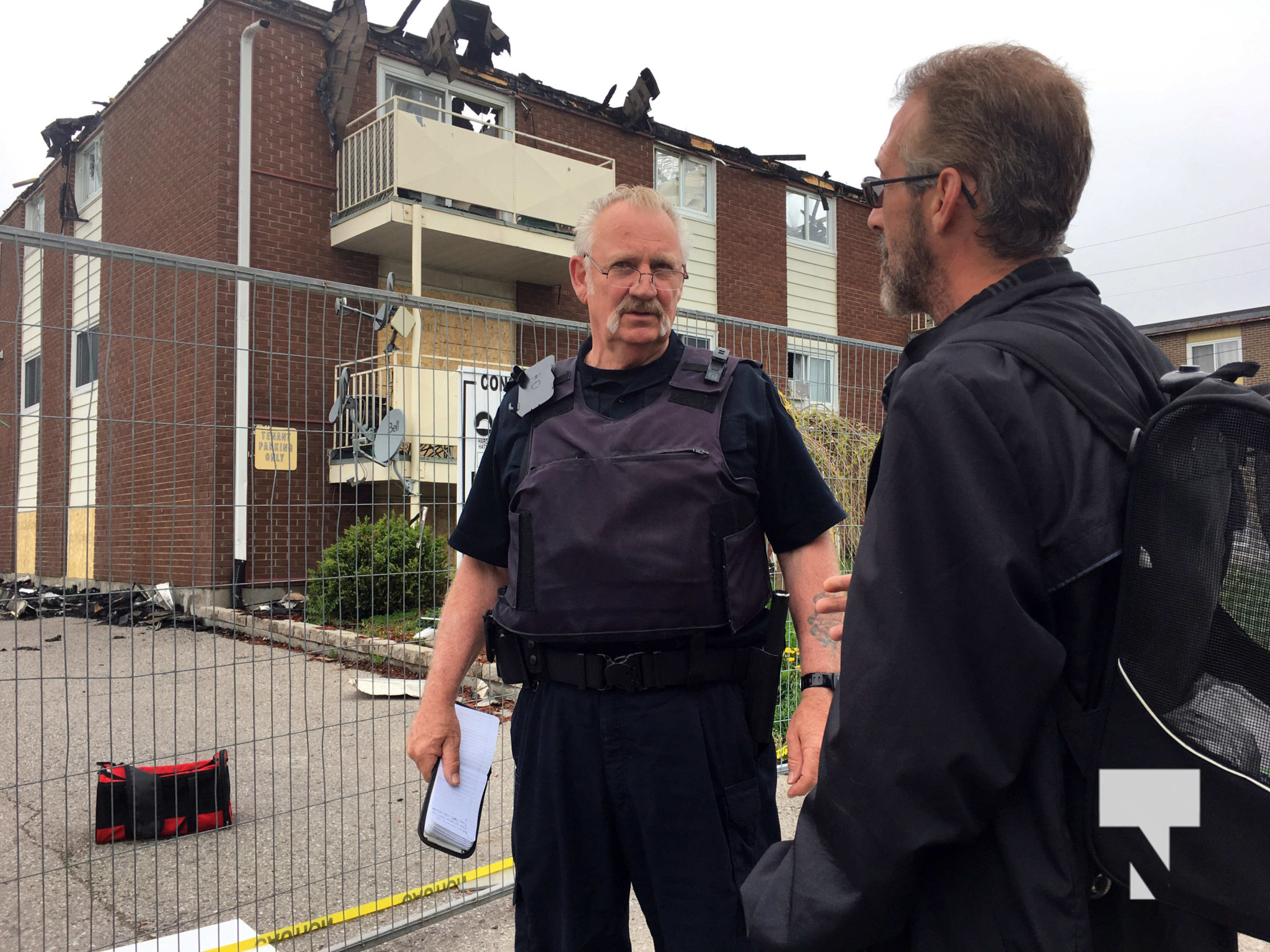 (Victim of the Wellington Street fire, John Campbell-Mahaney talks to a worker at the scene of the fire)

Emotions of frustration are near a boiling point with some tenants of a devastating fire on Wellington Street in Port Hope.
At least 35 people have been displaced for an unknown amount of time since flames engulfed the roof of the 24-unit apartment building.
Outside the building on Tuesday afternoon, smoke alarms can still be heard ringing throughtout the building that is now surrounded by security fence.
One worker with a hard hat on was posting signs stating it was a construction site.
Soon after, a person arrived stating he was investigating the fire for the insurance company.
At least one representative was on seen from the OSPCA stating he had been inside the building looking for at least one pet, but did not find any.
John Campbell-Mahaney was a tenant in the building and arrived looking for any sign of his cat.
“I’m not giving up,” said Campbell-Mahaney as he asked officials on site if they have seen any indication of the animal.
Clearly frustrated by the lack of information, Campbell-Mahaney is currently staying at a friends in Garden Hill.
“I haven’t heard a darn thing.”
At the time of the fire his son was staying with him, but his son his heading down to Texas for his wedding this coming Friday.
“I’ve never been through a fire and don’t know what to expect.” Like many others in the building, Campbell-Mahaney doesn’t have insurance.
Linda Blakeman lived on the third floor in the apartment beside where the fire started.
“Very frustrated at the moment. Hoping to hear something from somebody.”
Blakeman was told initially that she would be put up at a local hotel for several days, but hasn’t been told how long.
“I don’t know from one day to the next if we are going to be asked to leave. And how do you leave with nothing?”
“When can I go into my apartment to see if there is anything that might be salvageable.”
“I haven’t heard nothing from absolutely anybody since this happened. And it’s getting more frustrating as each day goes by.”
“Nobody is saying anything, no explanations given, no answers given.”
Blakeman said if people are going in such as the OSPCA officer it stands to reason it must be safe.
“If somebody is going in looking for anything, I would think it would be safe. But then again, I haven’t heard any time frame when it would be safe,” said Blakeman.
The only information Blakeman has had about her apartment is drone footage from Today’s Northumberland.
“I do see a lot of things standing.”
Looking at the footage Blakeman can see some areas of her apartment that appears haven’t been touched by the fire.
“I can see all of my cabinets still standing intact and knicknacks inside them.”
“There is a lot that is hopeful.”
Blakeman does credit the Canadian Red Cross who have helped a great deal since the fire.
“They’ve helped a tremendous amount when this initially started.”
Tenants were given emergency housing for five days over the long weekend.
“We were able to get clothing and personal items from vouchers from Wal-Mart which was very, very helpful and some food items.”
Port Hope Police Deputy Chief Darren Strongman would not confirm if police had completed their investigation and would only say the fire was “accidental due to electrical failure,” but wouldn’t elaborate.
Ontario Fire Marshal investigaor Andrea Gaynor stated to Today’s Northumberland on Tuesday, “the area of origin was identified as the attic/ ceiling space of a third floor apartment. There were electrical wiring and electrical fixtures (Such as lights) in the area of origin. Due to the damage we could not pinpoint the exact nature of the electrical failure.”
Gaynor said, “if the public encounters flickering lights, blown fuses or tripped circuits they should be diligent in notifying their superintendent and getting a licensed electrician to check for any faults immediately.”
Municipality of Port Hope officials stated they are working on getting information about the condition of the building.
Once they have that information they will be issuing a release. (On the left, Josh Neville, Business representative of Local 397 of United Brotherhood of Carpenters and Joiners of America is thanked by Bill Fulton who organized a fundraiser on Sunday bringing in over $20,000 to the victims of the fire)

In an amazing display of community spirit, Local 397 of United Brotherhood of Carpenters and Joiners of America have donated $10,000 towards relief efforts for the victims.

Business representative Josh Neville said, “we’re happy to give back to the local community.  In a small community we do what we can to help each other.”

UPDATE from Municipality of Port Hope

Tuesday, May 22, 2018 – Port Hope, ON
The Municipality of Port Hope and Northumberland County, along with other community partners, continue to work together to provide assistance to the residents who have been affected by the Wellington Street fire.
At this time, the Municipality can confirm that the building’s insurance company is conducting further investigations, with structural engineers scheduled to inspect the building later this week. Following the inspection, an engineering report will be provided to the Municipality’s Chief Building Official. At this time, access to the building will be granted only to the insurance company’s investigators.
A list of Emergency Support Services has been issued by Northumberland County. Residents who have been displaced from their homes are strongly encouraged to reach out to the identified organizations to seek shelter, donation information and support. This information will help individuals and families as they consider their housing options going forward.
The Municipality and the County would like to thank all those who have donated items and money to support the victims of the fire. The donations are being sorted and will be distributed by the Salvation Army, to those in need. At this time, the Municipality is no longer accepting donated items directly. The Canadian Red Cross and the Salvation Army are in the process of identifying specific needs of the victims and more information will be communicated, once the specific needs have been identified.
The Municipality will continue to provide updates to the community, as they become available. Residents are encouraged to visit porthope.ca for information.