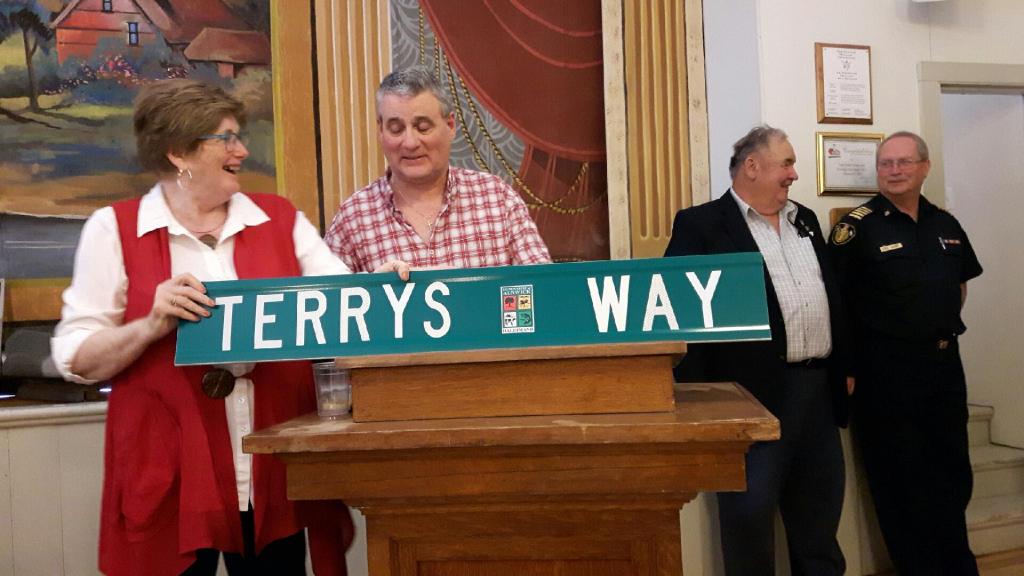 By Cecilia Nasmith/Today’s Northumberland
Right to the end, Alnwick-Haldimand Township chief administrative officer Terry Korotki proved to be a man without artifice or formality – as witnessed by the jeans and open-necked shirt he wore to his retirement party.

But his record of achievement is solid, as the crowd in township council chambers learned from a parade of speakers. And the plain speaking coming from a place of kindness and caring has earned Korotki a wealth of affection.
“Terry Korotki has retired, and a ceremonial send-off is required,” town crier Liam Cragg declared, and it was an event that was lovingly put together.
The decor was pure outdoor-sportsman with antlers, camouflage and greenery galore. The menu, catered by the Grafton Village Inn, included wild salmon, bacon-wrapped elk bites and wild-boar-and-elk-corn tacos. The theme was picked up with an elaborately decorated hunting-and-fishing cake by Grafton resident Norma Beatty.

Korotki shared the story of being a seven-year-old boy in the Village of Brighton. For a school project, his father took him to the municipal office to interview municipal clerk Shirley Patterson, a warm and helpful woman whom he observed at work.
“I got in the car and told my dad, ‘I want to be what that lady is,’” Korotki told the room full of well wishers.

He would work for Brighton for three years, and at Alnwick-Haldimand Township for another 30, making him the longest-serving current municipal employee in the ptrovince. And when he came to Alnwick-Haldimand, the Ministry of Municipal Affairs told him he was the youngest municipal clerk in the province (though the record only stood for a few months).

Fire Chief Allen Mann introduced a line-up of perhaps 20 speakers to reflect on Korotki’s career and revisit some amazing challenges – the construction of the Wicklow Boat Launch and a new emergency-services base in Roseneath, the establishment of a fire department of the township’s own, the installation of a communal water system that replaced wells in many Grafton homes, the creation of the municipal library system and the amalgamation of Haldimand Township (for which he was originally hired) with Alnwick Township to the north were among the major examples,

All this, Mayor John Logel said, and Korotki has been seen shovelling of the township office steps himself when it was needed.
“Right from the time we talked about anything until it was over – including all the clean-up, giving out things people had to have, going to different locations – he was totally involved,” former mayor Bill Finley stated.

Jamie Simmons, who represented Northumberland-Peterborough South MP Kim Rudd, recalled meeting Korotki years ago, when he was contracted to bring the township office into the world of technology. Korotki admitted it took several years for him to master the art of the e-mail.

Northumberland-Quinte West MPP Lou Rinaldi added that he remembered Korotki from his days in Brighton – even before there were cell phones.
Lovshin and Coombs said they had been impressed not only with Korotki’s dedication to the people of Alnwick-Haldimand but also to the good of all county residents.
“May your waters be calm and may the fish always be hungry, and may you always reflect on the good work you did here and the impact you had on the community and neighbouring municipalities,” was Lovshin’s wish.

Councillor Ray Benns said that, in 30 years with the township, Korotki had worked with five different mayors and 32 different councillors. He had gained their respect, Benns said, “but most importantly, I think, you have gained the respect of the residents and taxpayers of our municipality.
“I think sometimes you wore your heart on your sleeve, going out of your way to provide help to anyone in our municipality, and sometimes to those outside our municipality,”

Successor Robin van de Moosdyk, treasurer Arryn McNichol and Mary Martorino (who came to the township a year before Korotki) provided stories from the administrative offices of a boss who always had time to inject a note of informality (like the time he dumped a bag of chips on his desk and invited McNichol to help himself and the time he surprised Martorino’s granddaughter by twirling his prosthetic leg around).

All agreed that he unfailingly referred to the municipality as “the beautiful Township of Alnwick-Haldimand” over the entire three decades.
Councillor Sherry Gibson said she first met Korotki during the intricate amalgamation process,
“You impressed me with your integrity and your commitment to fairness,” Gibson said.
“I have never heard Terry say a bad word about anyone, and I think that’s important after a 32-year career in politics in the municipal world. He can always find the positive and the humour in any situation.”

Son Jonathan wondered how his father found time to sleep, accomplishing all he did and still managing to find plenty of time for him, his three brothers and his sister – he actually provided a role model the young man hopes to follow when he has a family of his own.
Korotki fought off tears to thank everyone and pronounced himself overwhelmed.
“I tell people it’s a beautiful township because there are beautiful people in it,” he said.

Korotki was lavish in his praise for the township staff. The public-works staff work around the clock to provide a measure of safety to drivers who must be out in snowy, icy weather, he said, and their fire department compares favourably with any municipality’s in the county.
“My baby, really, when I first started in the township,” he said of the fire department.

The township had been through five agreements for fire service from five municipalities, and he was determined they would have their own.
He recalls getting solid support from Finley, who was reeve at the time.
“He said, ‘Terry, if you think you can do it, go for it.’”

Korotki also commended the many councillors he had worked with.
“Everyone thinks politicians are different, but they are human beings like you and I. They serve the community, they seek the best for the municipality, and they volunteer their personal time and sacrifice.
“I always appreciate the dedication of our councillors. They all have a big heart. They are committed to their community, trying to better the quality of life for the children, the seniors and everyone in the population,” Korotki said.
“I truly appreciate it, and enjoy striving with those councillors, not only in this township but working together, partnershipping to make the county a wonderful place to live. If we can make everyone’s life a little better, it’s great for everyone in the long term.” TODAY’S NORTHUMBERLAND Cecilia Nasmith
An appropriate centrepiece adorned the desk where Alnwick-Haldimamd Township chief administrative officer Terry Korotki sat to hear a line-up of speakers congratulate him on his retirement. TODAY’S NORTHUMBERLAND Cecilia Nasmith
The special lure presented as a retirement gift by Councillor Ray Benns was as much appreciated by Alwick-Haldimand Township chief administrative officer as the councillor’s hilarious stories. TODAY’S NORTHUMBERLAND Cecilia Nasmith
The one Alnwick-Haldimand Township staffer who has been at the township longer than chief administrative officer Terry Korotki, Mary Martorino had lots of stories to share at Korotki’s retiremet party.