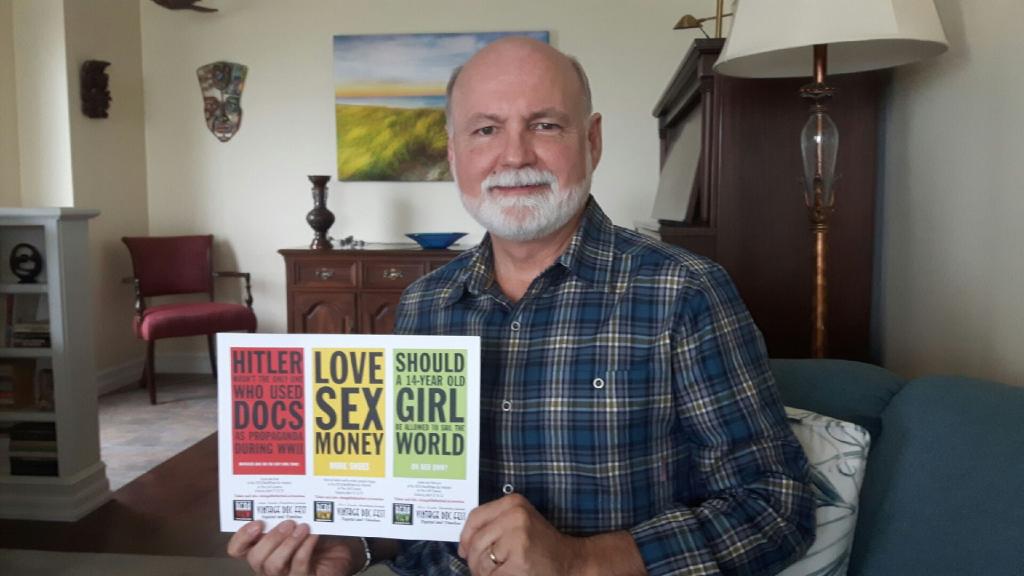 Today’s Northumberland/Cecilia Nasmith
Ross Pigeau, chair of the Rear View Vintage Docfest (held under the auspices of the Marie Dressler Foundation), displays a poster that gives a preview of coming events for the April 21-22 festival.

Look to Rear View to illuminate both past and present
By Cecilia Nasmith
The Rear View Vintage Doc Fest April 21 and 22 poses some interesting questions to the viewer.
What does it take to be happy? Can the propaganda Hitler used to cement his hold on power be put to less nefarious uses? How did a 14-year-old girl become the youngest person ever to sail around the world solo?
And that only accounts for three of the 19 films screening over two days at The Loft in downtown Cobourg.

Rear View committee chair Ross Pigeau is delighted with the films selected to illustrate this year’s two themes – Art As Social Change and Age And Happiness.
Last year, selecting a theme was easy – Canada 150. And it was a delightful way to kick off this new film festival held under the auspices of the Marie Dressler Foundation..
The Vintage Film Festival has been an autumn staple for 25 years, Pigeau said recently. Rear View provides something for the Spring.
Like the Vintage Film Festival, its proceeds support the foundation’s annual scholarships for local students going on to study film and media arts in their post-secondary education.
Also like the Vintage Film Festival, Rear View focuses on older films – which sets it apart from other renowned documentary festivals.
“Our idea was, let’s look at today’s issues through yesterday’s lens,” Pigeau said.
“There are some outstanding documentaries they have done in the past which deserve to be looked at again in order to comment on some of today’s issues.
“Our tag line is Topical and Timeless.”

Pigeau said his committee screened almost 60 films, and rated them on a scale of 0 to 3. Then he aggregated the scores and generated a meme to rank them and make final selections.
Since the first Rear View got financial assistance from the Town of Cobourg, admission was free. This year, the films are organized into eight two-hour blocks, with free admission to the first block on Saturday and Sunday and $10 admission per block thereafter.
Last year’s films were supplied free from the National Film Board, Pigeau added. They are supplementing that catalogue this year with films from other sources, and proceeds will offset these costs as well.

Having seen all the films at least once, Pigeau enjoys discussing what’s in store for local audiences.
Long-time local residents may remember the excitement from 1984, when Larry Weinstein filmed a documentary called Making Overtures, which depicted the commitment of the members of Cobourg’s orchestra and choir to their music, and their struggles (and fundraising) to keep it alive. It was nominated for an Oscar.

Triumph of the Will is of particular interest to historians. It’s a 1935 film by cinematographer Leni Riefenstahl, who won Hitler’s favour and consequently was granted what Pigeau termed outstanding access to the aspiring dictator for this propaganda piece. For example, in one scene where Hitler addresses a roaring crowd, he allowed her to construct an apparatus that took her skyward behind the soaring banners at his back to a pinnacle from which she filmed a panoramic sweep of his audience.
“He was quite impressed with her work, and rightly so – she was an amazing cinematographer for her time,” Pigeau said.
“Even so, this is a piece of propaganda writ large. We thought it was important, because she set the standard to show how propaganda should be done as an artistic endeavour to influence people.”The film also figured prominently in Has Anybody Here Seen Canada? A History of Canadian Movies 1939-1953, in which the National Film Board used clips of Triumph of the Will to galvanize Canadian support of the war effort. In effect, Pigeau said, the Canadian film conveyed its own agenda through the film Riefenstahl made for another purpose entirely, turning the Nazi propaganda upside-down.
Of course, he added, they are not showing Triumph of the Will to glorify Nazi Germany.
“But I think it’s important for us to remember the artistic tools that are being used for propaganda purposes, and it’s happening today. We should be exposed to this, because we will be better armed and appreciate how art – as great as it can be – can also be used for nefarious purposes.”

Pigeau is excited by Capturing Reality: The Art of Documentary (2008), which interviews some outstanding (and, in some cases, pioneering) documentarians on making art that influences the world.

Then there’s Wim Wenders, better known as a mainstream filmmaker, whose documentar Buena Vista Social Club is a touching comment on the persistence of talent and artistic vision, no matter what one’s age.

One may wonder about the parents of 14-year-old Laura Dekker, who became the youngest person to sail solo around the world, Pigeau said, and the parents were even taken to court in their native Netherlands. But the ruling was that the government could not interfere in parental matters, and young Laura succeeded in her quest – and remains devoted to the sailing she has loved all her life.

“Happy is a great documentary on what happiness is all about,” Pigeau added, referring to a 2011 film that delves into this question.
“What defines happiness – is it love, sex, money or more shoes?

“It goes to Bhutan as well, where they are not interested in the Gross National Product as an index of how well the country is doing – it’s the gross national happiness index.”

For year three, Pigeau hopes to issue a call for student-made films one to 10 minutes in length that they can screen and select for one of their blocks. For 2018, however, there’s a great line-up to enjoy and they’re offering a special deal of $50 for all eight blocks (a $10 savings).

Tickets can be purchased at vintagefilmfestivall.ca/rearview. And if they’re available, tickets can be picked up at the door.
But be warned, Pigeau said.
“The Loft is an intimate venue with 60 seats. When they’re gone, they’re gone.”

The schedule opens Saturday, April 21, with four films between 10 a.m. and noon:
Making Movie History: Dorothy Todd Henout (2014, five minutes) has Henout describing her arrival at the National Film Board and her work on the ground-breaking community film-making campaign called Challenge For Change.

Has Anybody Here Seen Canada? A History of Canadian Movies, 1939-1953 (1979, 85 minutes) emphasizes the importance of documentaries as propaganda, with its special segment on Triumph of the Will and how the Nazi propaganda film was used to galvanize social change and support for the war effort among Canadian audiences.

Maud Lewis: A World Without Shadows (1976, 10 minutes) refers to the world of beauty as observed by the artist, a woman crippled by arthritis in her youth who discovered art and painting at the age of 30.

Mabel (2015, 20 minutes) is 90-year-old Mabel Robinson, who broke barriers in the 1940s by becoming the first woman in Hubbards, NS, to open her own business. More than 70 years later, Robinson still works at that beauty salon, providing shampoos and sets to succeeding generations of customers.

The next group of April 21 films, which showcase artists, runs from 1 to 3 p.m.:
Debris (2015, 14 minutes) is a portrait of Tofino, BC, intertidal artist Pete Clarkson as he works on his most ambitious and personal project: a memorial to the great and devastating 2011 earthquake and tsunami that hit Japan.

Ai Weiwei: Never Sorry (2012, 91 minutes) chronicles the artist and activist as he prepares for a series of exhibitions, during the course of which he clashes repeatedly with the Chinese government.

Following that, two more films occupy the 4-to-6-p.m. slot:
Happy (2011, 76 minutes) explores the secrets behind this most-valued emotion through real-life stories of people around the world and interviews with scientists who are researching the issue.

Shameless: The Art of Disability (2006, 48 minutes) tracks a motley gang of five disabled artists as they create and present their own self-representations, during which they show not only their passion for art and transformation but also the everyday complexities and unexpected richness of life with a disability.

April 21 ends with two films that shaped the nation around the time of the Second World War, running from 7 to 9 p.m.:
Churchill’s Island (1941, 21 minutes) won the National Film Board its first Oscar. Narrated by a young Lorne Green, it was a shameless play to raise morale among Canadians during the Second World War.

Triumph of the Will (1935, 110 minutes) was filmed as unabashed propaganda during the rise of Hitler’s Third Reich by gifted cinematographer Leni Riefenstahl, who won Hitler’s favour and thus gained wide access to her subject.

On Sunday, two films open the day between 10 a.m. and noon:
Age Is No Barrier (1989, 24 minutes) is the story of a group of seniors who call themselves the U of Agers. They meet regularly to do gymnastics, seeing themselves as ordinary people who do extraordinary things (and hope to inspire others to do the things that make them happy).

Capturing Reality: The Art of Documentary (2008, 97 minutes) interviews 33 leading documentarians (from cinema-verite pioneers like Albert Maysles and Michel Brault to mavericks like Errol Morris and Nick Broomfield) on their challenges in capturing reality on film to shape into art that influences the world).

Two more films between 1 and 3 p.m. tell the stories of extraordinary young people:
Hannah’s Story (2007, 29 minutes) is about Hannah Taylor. Spotting a homeless perseon in a Winnipeg back alley, she took that disturbing experience and let it inspire her to find happiness by doing her part to change the world.

Maidentrip (2013, 82 minutes) is about the two-year voyage of 14-year-old Laura Dekker, who set out to become the youngest person ever to sail around the world – alone.

Three films look at social change between 4 and 6 p.m.:
VTR St. Jacques (1969, 26 minutes) is about a citizen’s committee in a poor Montreal neighbourhood that filmed people’s concerns and shared them with the larger community. It spurred a conversation about shared concerns and joint solutions with positive results.

Spare Change (2008, seven minutes) is an animated short recounting interesting (and sometimes comical) experiences that befell Ryan Larkin over many years as a panhandler (sadly, he died before the film was completed).

Manufactured Landscapes (2006, 86 minutes) extends the narratives of photography for a meditation on planetary human impact.

The docfest ends with two films that celebrate the love of music from 7 to 9 p.m.:
Making Overtures: The Making of a Community Orchestra (1984, 28 minutes) is the Oscar-nominated story of a Cobourg orchestra and choir led by Philip Schaus, an affectionate and humourous portrait that unveils the musicians’ passion for performance, imaginative fundraising methods and collective will to survive.

Buena Vista Social Club (1999, 105 minutes) is the Wim Wenders film about aging Cuban musicians whose gifts had been shoved into a corner when Castro took over the island nation. When Ry Cooder travelled to Havana, he sought to bring the group out of retirement and back to performing.