Miedema Excited for Opportunity Ahead with Kingston Frontenacs 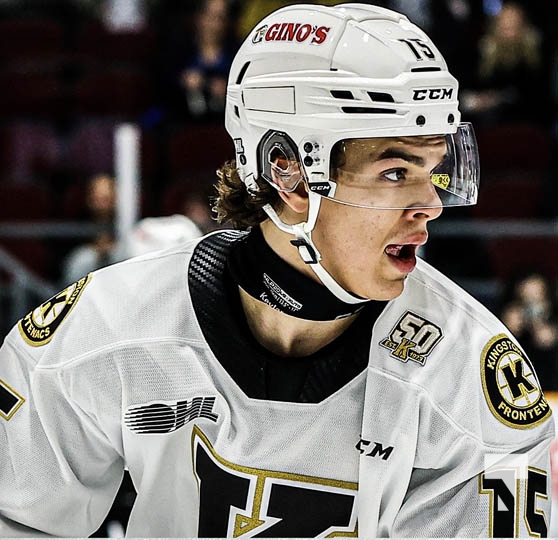 (Photo from Kingston Frontenacs graphic)
By Jeff Gard/Today’s Northumberland
Cobourg’s Ethan Miedema made his debut for the Kingston Frontenacs on Wednesday night during an 8-1 loss in Ottawa against the 67’s.
As previously reported by Today’s Northumberland, the Frontenacs acquired Miedema in the deal that sent Shane Wright to the Windsor Spitfires ahead of Tuesday’s Ontario Hockey League trade deadline.
“Obviously it was a bit of a shock,” Miedema told Today’s Northumberland. “I knew the deadline was coming to an end so I didn’t know exactly what was going to happen, but super excited for this new opportunity in Kingston and I would really like to thank everyone in Windsor as well.”
Miedema was drafted fourth overall by the Spitfires in the 2021 OHL Priority Selection and a season and a half there for coach Marc Savard. In his rookie season last year, the club advanced all the way to Game 7 of the OHL championship series before losing to the Hamilton Bulldogs.
“We had a really strong team last year and almost won an OHL championship losing in Game 7, but I think something I definitely want to bring over to Kingston is just that experience,” Miedema said.
He appreciates the opportunity playing for the Spitfires organization.
“Nothing but the best in Windsor. It’s an unreal organization and all the guys were so welcoming there coming in as a 16-year-old and can’t say enough about the Windsor Spitfires.”
This is the first time Miedema has experienced being traded and the challenges that come with changing teams, leaving billet families and moving to a new city and school.
“It was definitely a tough day leaving my billet family and my close friends and anyone else in the Windsor area that’s kind of helped me to this point,” he remarked.
Joining the Frontenacs in Kingston certainly moves Miedema back a little to home. He’s looking forward to seeing his family and friends more and certainly his dog as well.
It also won’t be long until he sees a close friend on the ice. Following home games Friday and Saturday in Kingston, the Frontenacs will head to Peterborough on Monday evening to take on the Petes, which acquired Port Hope’s Owen Beck prior to the deadline.
“I don’t think any of us would’ve thought we would’ve been on these teams, from the start of training together and he’s my best friend so we talk a lot about stuff like that and just helping each other through this I guess,” Miedema said.
Game time Monday is 7:05 p.m. at the Peterborough Memorial Centre.
Miedema is excited to join a now younger Frontenacs roster which is building for the near future as the organization is hoping for a successful bid to host the 2024 Memorial Cup.
“If we get the Mem Cup, unreal, I think that would be a great experience for everyone,” Miedema said. “That’s definitely something that we’d want in Kingston, but if not I think good things are still to come.”
Miedema, who turns 18 in March, is eligible for the NHL Entry Draft this year and has been selected to the 2023 Kubota CHL/NHL Top Prospects Game in Langley, B.C. The game will showcase 40 of the top draft-eligible players from the OHL, Quebec Major Junior Hockey League and the Western Hockey League.
“Realistically it’s all of the top guys from the country so it’s going to be a hard game to stand out just because everyone’s so talented and so strong, but just want to play my overall game and just showcase what I can really do on the ice.”