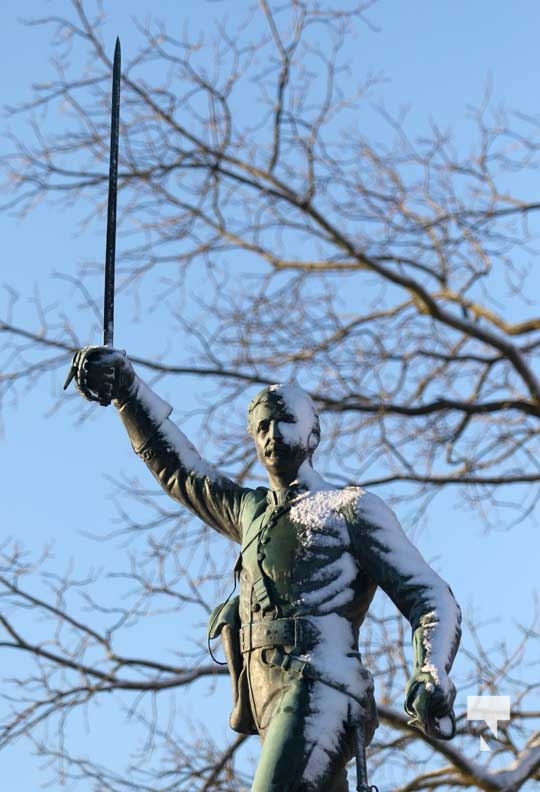 At their Dec. 20 meeting, Port Hope council members unanimously declared a climate emergency and adopted the United Nations Declaration on the Rights of Indigenous Peoples.

Along with a long list of recommendations and actions to flow out of these votes is a look at the future of the statue that has stood in front of Town Hall for more than a century.

“Adopting these two critical declarations speaks to the values of this council,” Mayor Olena Hankivsky said in the announcement.

“I’m so very pleased to have advanced both declarations. They are appropriate developments in Port Hope’s movement towards reconciliation and as agents of change for the betterment of our community.”

This makes Port Hope the latest of more than 600 Canadian municipalities to acknowledge the scale of the climate crisis.

“The climate emergency was declared for the purposes of naming, framing, and deepening our commitment to protecting our economy, our eco systems, and our community from climate change,” the press release stated.

As part of the declaration, council also made recommendations to staff to consider an intermediary step in developing a Climate Action Plan, to be completed in 2023. These recommendations include identification of three priority actions in relation to mitigation and adaptation in the next 60 days.

The United Nations Declaration on the Rights of Indigenous Peoples establishes a universal framework of minimum standards for the survival, dignity and well-being of the Indigenous Peoples of the world, and elaborates on existing human-rights standards and fundamental freedoms as applied the specific situation of Indigenous peoples.
As part of Port Hope council’s declaration, recommendations were made on additional components to be considered as part of the Indigenous Awareness strategy, to be completed in 2023.

These recommendations include consideration of the appropriateness of the statue of Col. Arthur A. T. Williams in front of Town Hall, erected in recognition of his service in the 1885 Battle of Batoche during the North West Rebellion staged by Metis and their First Nation allies – as well as a reconsideration of the photograph of the statue’s unveiling on the wall of council chambers.

Other recommendations include strengthening the Municipality’s Land Acknowledgement statement; enhancing staff Indigenous awareness training and education to take place on National Indigenous People Day (June 21), and exploring an opportunity to feature a public education event on the National Day for Truth and Reconciliation (Sept. 30).

Staff will provide reports to Council on the development of the Climate Action Plan and Indigenous Awareness Strategy for their consideration and direction at a future meeting.