Volunteers Come Through for the Homeless in Cobourg 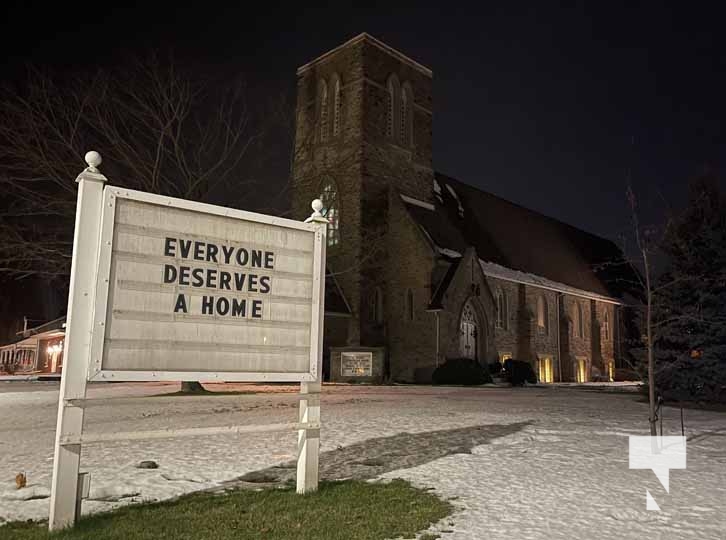 Volunteers have once again come forward to help the homeless after they were evicted from the bus terminal in Cobourg on Monday, November 21, 2022.

On Saturday, the bus terminal was opened and used as a warming centre overnight Saturday and Sunday.

On Monday, a number of homeless that had been staying inside the terminal were evicted by police and by-law.

Local homeless advocate Missy McLean was incensed the people would be put out into the cold with no other overnight options.

But on Tuesday, it seems that once again through the communities efforts, people no longer have to sleep in the cold.

Outside St. Peter’s Church the sign says, “Everyone Deserves A Home.”

Even before the warming centre opened up for the first time on Tuesday evening, people were entering the church looking for warmth.

McLean said the same volunteers that helped over the weekend have grown in numbers to help at St. Andrew’s Church.

“The church has given the volunteer group that has come together permission to use space to a overnight warming room for folks to shelter out of the cold.”

As long as there are volunteers, the church will allow the overnight warming room.

“It’s been 12-hours, but I’m overwhelmed by the response that we’ve had from the community. Folks have really shown up for their neighbours. If what we heard today is any indication, I think we’re going to be good.”

Overnight shifts will be approximately two-hours in length to make it as manageable as possible.

McLean said she hasn’t heard any reason why people were evicted from the bus shelter on Monday.

Through the network of volunteers those that need the warming centre have been notified.

Since Saturday, McLean said, “it’s been a lot of rewarding work, mixed in with a lot of frustration, a lot of anger and a lot of worry. But when I think about the folks who are going to benefit from having access to this warm, safe place tonight – it’s all worth it.”

Town of Cobourg Goes From Kind Gesture to Turfing the Homeless