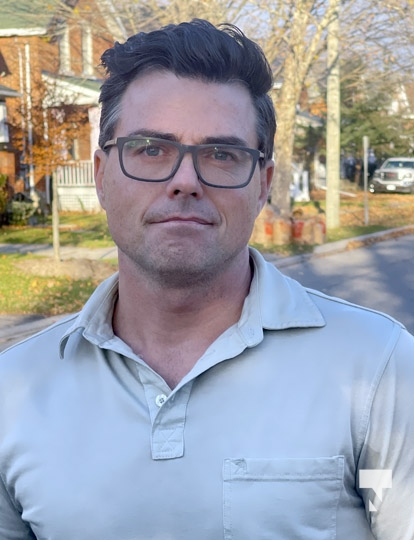 Exclusive – Mayor elect Lucas Cleveland has made a public apology for his actions that took place on Sunday, October 30, 2022 at McDonald’s.

Cleveland was going through the drive-thru of McDonald’s on William Street around 1 p.m. getting a Happy Meal wen staff at McDonald’s wouldn’t accept a $100 bill.

Staff told Cleveland and signs are posting stating the policy.

Cleveland said the drive-thru window took the bill, but wouldn’t give him the food or money back stating police had been called.

A manager of McDonald’s posted on Facebook that Cleveland wouldn’t move out of the drive-thru with his truck stating he put his window up, turned off the engine and said he wasn’t leaving until they took his money.

Servers did take his money, but called police to have him removed from the drive-thru.

Police arrived and spoke to both management and Cleveland. He was given his money back by police and left.

The next day Cleveland put in a Freedom of Request for the body worn camera by the police service and stated several times through the week he would give the video to Today’s Northumberland.

“Please access (the) video,” Cleveland stated in a text to Today’s Northumberland.

“You will see no swear words were uttered on my behalf.”

Later in the afternoon, Cleveland stated he received the USB with the video of the incident, but added, “I’ve been advised that I could find myself in trouble if I duplicate the video or give you my copy.”

Cleveland did agree and showed the entire video in it’s entirety to Today’s Northumberland.

The body worn camera shows a police cruiser arriving at McDonald’s and Cleveland standing just outside the north entrance of the restaurant.

“My name is Lucas Cleveland, I’m the new mayor of Cobourg,” are Cleveland’s first words to the officer.

“She took my $100 bill, she’s refusing to provide service. I sat there and waited then she called you guys.”

“I said I need you to give me my kids fucking Happy Meal.”

Cleveland stated his wallet got stolen the previous night and again said he was the mayor of Cobourg and stated, “I just wanted a Happy Meal for my fucking kid.”

The officer conversed with Cleveland for a few minutes and asked if he did state to the staff if he was the mayor of Cobourg.

Cleveland stated he did.

The officer went into McDonald’s and spoke with the manager who immediately gave the $100 bill to the officer.

During the conversation with police, the Manager did state that Cleveland identified himself as the mayor of Cobourg.

Outside the officer gave Cleveland the $100 bill back and the incident was over in approximately six-minutes.

I needed to do better and I didn’t and I will moving forward. I’m really sorry for all those I have negatively affected.”

Cleveland stated he isn’t sure about the legalities of sharing the video by giving it to the media.

There was an incident with Cleveland at a elementary school in which several people approached Today’s Northumberland. Cleveland stated at that time, that he should have done better along with staff, but he apologized to staff at the school. At that time he stated he should know better.

When asked about it, Cleveland stated, “I’m learning that I’m under a microscope and that I, at all times represent the office of the mayor.”

When the incident at the school happened, Cleveland was not the mayor and has yet to be sworn in as mayor which takes place on November 15.

“I have obviously some learning to do. I’ve learned a lot through embarrassment and humiliation in this one. Moving forward I just need to do better.”

Regarding Cleveland stating he didn’t use profane language during the incident at McDonald’s he stated, “I meant there is no profanity at anyone. I was obviously frustrated and I often do use colourful language, but it wasn’t towards anyone. When refer to the swear words, it was that I wasn’t swearing at anyone. It was more as adjectives, less as nouns.”