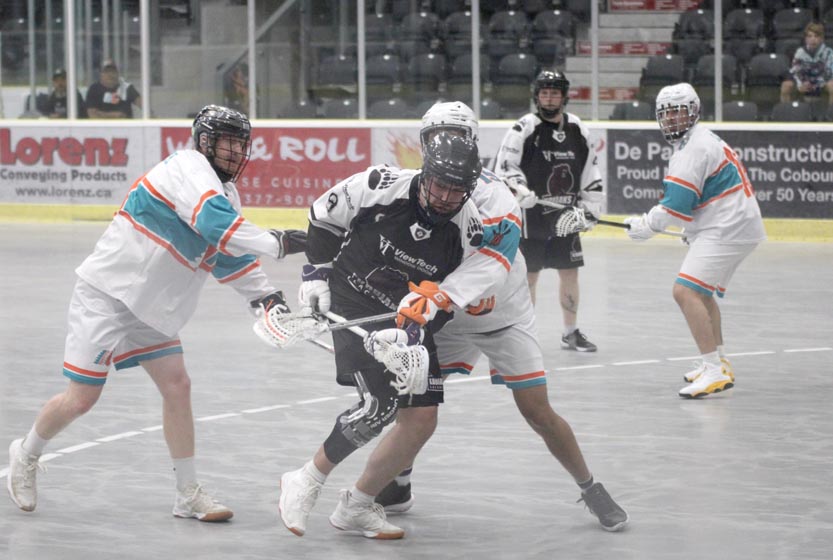 By Jeff Gard/Today’s Northumberland
The Cobourg Kodiaks never trailed in a big 10-8 victory over the visiting Six Nations Chiefs in Major Series Lacrosse action Sunday night at the Cobourg Community Centre.
It was the first win in the early going of the MSL season for the Kodiaks (now 1-3-0), who also handed the Chiefs (3-1-0) their first defeat in the process.
“It felt good. We’re a young team building here and it was nice to get our first win,” said Kodiaks captain Cam Milligan, who had a goal and assist in the win. “We have a lot of good guys in that room and it was good to get the first one to get going here.”
Cobourg jumped out to a 2-0 lead and led by no more than three goals in the contest, but with Six Nations tying the score only once – 4-4 past the midway mark of the second period following a lengthy delay when a pane of glass was knocked out of its stanchions.
Six Nations pulled within one late in the third before Brine Rice secured the Cobourg win with an empty-net power play goal in the final minute of play.
“In playoffs you’re going to have to win one-goal games, especially against a good team like Six Nations,” Milligan said. “It was good for our defence to be able to hold them off at the end while they were putting some pressure on us and us walk away with the two points. That was a big two points for us.”
Former Kodiaks captain Joey Cupido made his debut for Six Nations following a trade earlier in the week and coming off a National Lacrosse League championship victory with the Colorado Mammoth. Cupido registered four goals and an assist in a losing cause.
Alex Simmons led the way, thought to be a four-goal night, but credited with three on the scoresheet for the Kodiaks.
“He played for us last year (in the MSL Classic), first game back this year,” Milligan said. “It was good to get him back in the lineup. He obviously shoots the ball really well and is a threat on offence. He helps our offence tenfold when he’s out there.”
Only four teams remain this MSL season, including Cobourg, Six Nations, the Peterborough Lakers and Brooklin Lacrosse Club. The start of the season was postponed due to an ongoing legal dispute regarding the relocation of the Brampton Excelsiors franchise to Owen Sound. The Oakville Rock recently pulled out for the 2022 season due to the uncertainty of this summer’s MSL campaign.
Every game on the league schedule is sure to present a tough challenge.
“We’re seeing these guys a lot this summer and we know we’re going to be seeing one of these teams in the playoffs at the end of the year so we’re kind of building for that as well,” Milligan said.
Cobourg returns to action against Brooklin on Wednesday, July 6 at 8 p.m. in Whitby and visit the Lakers on Thursday, July 7 at 8 p.m. in Peterborough.
The next home game for Kodiaks is Sunday, July 10 against Six Nations. Game time is 6 p.m. at the CCC.
COBOURG 10 SIX NATIONS 8
1st period
COB Aaron Woods (Riley Curtis, Kealan Pilon) 10:37
COB Ben French (Alex Simmons, Scott Del Zotto) 14:23
SN Joey Cupido (Cody Jamieson) 17:23 SH
COB Alex Simmons (Cam Milligan, Pilon) 18:23 PP
SN Randy Staats (Tyler Brown, Jamieson) 19:57
2nd period
COB Riley Curtis (Del Zotto, Brine Rice) 5:14
SN Cupido 2 (Sam Leclair, Randy Staats) 8:29
SN Cupido 3 (Jamieson, R. Staats) 8:37
COB Cam Milligan (Brandon Robinson, Rice) 9:16
COB Woods 2 (Scott Dominey) 14:47
SN Vaughn Harris (Austin Staats, Jamieson) 16:04 PP
3rd Period
COB Brandon Robinson (Del Zotto, Ben French) 1:13 PP
COB Simmons 2 (Pilon, Robinson) 3:57
SN Cupido 4 (unassisted) 4:07
COB Simmons 3 (Robinson, French) 7:31
SN Mason Kamminga (unassisted) 13:25
SN Cody Jamieson (Cupido, R. Staats) 15:25
COB Brine Rice (unassisted) 19:31 PP (empty net goal)