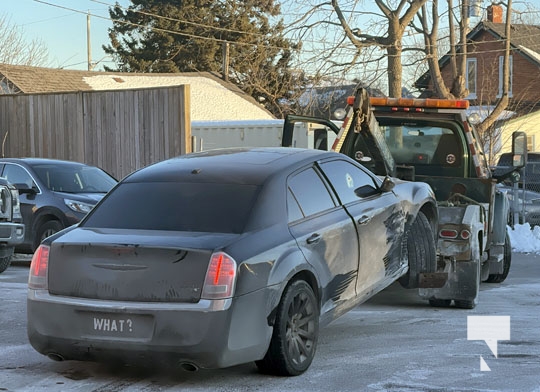 Editorial – Since Today’s Northumberland first broke the story of the gunpoint arrest of a suspect on Friday, January 21, 2022 there have been many new details that have come out.

The drama began shortly after 3 pm when police received a call of a traffic complaint.

The vehicle was spotted on Orange Street and pulled into a parking lot. Police followed. Shortly after a officer had to jump out of the way when the vehicle suddenly accelerated towards him.

Seconds later it rammed another cruiser. The suspect at first refused to leave the vehicle, but realized Cobourg Police had him. He exited the vehicle shouting “I’m sorry. I’m not resisting.”

The Brampton man is being held for a bail hearing on Monday.

Today’s Northumberland has learned the suspect has two outstanding warrants for similar incidents in Toronto and Peel Region including armed robbery for forcibly stealing cars, commonly known as carjacking.

There have many comments how Cobourg isn’t safe anymore.

That doesn’t mean Cobourg doesn’t have its share of crime, but the city is an influence.

Cobourg is as safe as any other community of its size. Maybe even better with the likes of officers like yesterday.

In a social media society, people air their criticism freely. Most times they spout off with anonymity.

If I sound like a broken record, it’s one of my many faults, but police aren’t perfect. Like anyone else or any other profession, they have faults.

But for the last few years they’ve had to respond to every situation possible and calmly deal with peoples anger, confusion over COVID.

It’s something that has gone from bad to worse in terms of respecting the police.

Police are there to enforce the law. If our government creates a law that doesn’t suite the individual, take it up with the government. Don’t criticize the police for enforcing it.

With the video obtained by Today’s Northumberland showing two different angles of the arrest, it shows nothing but professionalism from members of the Cobourg Police apprehending the suspect.

That praise should also be shared to the citizen who saw what was happening and acted immediately. When the witness saw the suspect trying to get out between the cruiser and a fence he immediately reacted, hopped in his pickup truck that had a snow plow attached and parked it directly behind the cruiser. The suspect had no where to go.

It’s people like that, that show the good in the world. That shows people back the blue.

VandeGraaf stated on Saturday to Today’s Northumberland, “we never want to see anyone in the community put themselves in danger.”

Saying that he added, “we are very very grateful – it was very brave thing to do.”

Police do their job day in, day out. See the best and worst of people. Are praised and assaulted.

But when the community steps forward and supports them like what happened on Friday. Other than going home to their family safely after a shift, there is no better feeling than knowing you have the support from the community.

That’s the good side of people.

The bad side was also shown on Friday.

After the suspect was taken into custody things had calmed down – a bit.

One tenant wanted to leave the parking lot, but police needed to document the scene with photos.

A witness overheard a police officer trying to explain to a tenant how they would be delayed from leaving until the investigation was completed and photographed.

The officer stated to the tenant that a member of the service had nearly been run over and had to jump out of the way to avoid serious injury or worse.

The tenant would have none of it with the officer and voiced his displeasure.

The witness said the tenant told police that he hoped it was the officer who gave him a ticket for not having cleared his window of snow a few days earlier that nearly got hit in the parking lot.

We all get mad when we shovel the driveway and the plow comes through shortly after. The same I’m sure would hold true about getting a ticket for not clearing your windshield of the snow.

But what an idiotic, asinine, ignorant statement to make police minutes after a adrenaline fuelled gunpoint arrest of a suspect who rammed a police officer while another who had to jump out of the way from being struck.

I am pro-police. Always have been. Always will be. That doesn’t mean I get along with all of them. We’ve had our “differences” over the years and I’m sure that will continue. I’ve made mistakes dealing with them at times, and hopefully some of them would say the same. That’s life.

But over the last few years cops have had it tough. And in no way am I saying others haven’t.

But police have had to take on a new role in dealing with the public. The respect for the blue hasn’t been the same since COVID. When we get through the pandemic I hope that changes back to what it was.

But here’s a message to the “individual” that spouted off to the officer who could have lost a colleague, friend and fellow officer – the best thing you could do is walk less than a block away to the police station. Ask to speak to the Chief along with the officer who had to listen to your tantrum because it held you up for a precious few minutes.

If they agree to meet you – apologize.

Anything less confirms to society what kind of person you are.