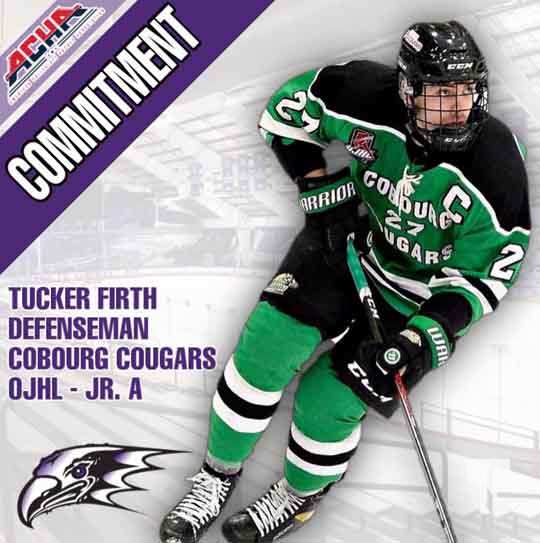 While his final season of junior is currently on hold, Cobourg’s Tucker Firth is preparing for the next chapter in his hockey career.

Firth, who is a defenceman and the captain of his hometown Cobourg Cougars junior A club, has committed to join the Niagara University Purple Eagles men’s hockey team, an ACHA Div. I program in New York, starting the 2022-23 season.

“There were a lot of great schools out there with great opportunities, but (Niagara) just felt right,” said Firth, who noted he had great communication with Purple Eagles head coach Tom Mooradian.

“It had that home feeling that I could see myself at for the next four or five years. It’s one of those places that got me excited to continue my education, but also to continue playing hockey.”

Firth didn’t have the opportunity to visit the Niagara University campus in person, but the 20-year-old said schools have done a great job in recent years making virtual tours available. While it doesn’t place visiting in person, “the virtual tours looked amazing, the campus looks awesome.”

The locations of the arena and campus are great with easy access over the Canada-U.S. border, whether that be at Niagara Falls or Buffalo. Firth is planning to study criminology and has heard great things about the professors in that program.

Of course, he’s also ecstatic to join the school’s hockey program that has a tradition of success. They won the Northeast Collegiate Hockey League championship in 2014, 2015, 2017 and 2020.

“They’re a team that I’m really excited to grow with over the next four years and do my best to help them get another championship or a few championships for all I know,” Firth said.

Coach Mooradian will “help me in my hockey career, but also my lifestyle in general and help me through life and college and all that kind of stuff.”

Firth and the Cougars last played on Dec. 20 before their holiday break followed by the latest provincial shutdown. He realizes the need to be safe, but is also confident in the protocols the Ontario Junior Hockey League put in place this season.

“I’m pretty disappointed that we’re not all together right now and continuing our season,” Firth remarked. “The OJ has done a great job with protecting its players and staff.”

Firth is optimistic about finishing the season and has enjoyed returning to Cobourg to finish his junior career with the Cougars, which are 14-13-1-2 through 30 games.

“It’s been awesome. We have a great team, a great group of guys,” Firth said. “We have a great chance when we get back to finish this year off with a bang and get into playoffs. We’ve let some games get away from us, but we’re also a team that has a lot of capability to come back and put a lot more points on the scoreboard for the rest of the year. It’s an exciting time, it’s everything I imagined being able to lead this group of guys and wear the Cougars jersey.”