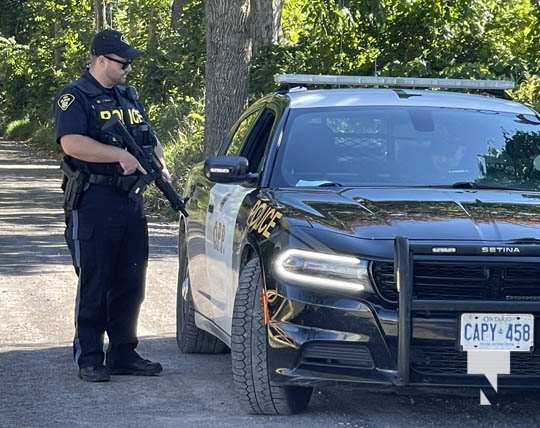 It’s not often that we’ll criticize the provinces police force.

But there is a common factor that arises every single time a serious incident occurs when province command from Orillia becomes involved in an investigation.

You can bank on it that it will happen. And sure enough it has.

For the benefit of the community they serve once and for all it has to stop. Ontario Provincial Police have to do a better job.

Yesterday (September 16, 2021) there was a shooting in The hamlet of Trent River north of Campbellford.

One man was taken to hospital and listed in critical condition. The suspect is still outstanding. Pretty basic information.

The problem with that is that information didn’t come out until approximately 14-hours after police initially responded.

Now, no one will cry foul for the initial first few hours that nothing was released.

There was a lot happening in and around the scene. Numerous officers were called in to search for the suspect including members of the Emergency Response Unit (ERT) and Tactical Response Unit (TRU).

But OPP has a communications team solely for the purpose of communicating information to the public in very serious incidents like this one. Everyday occurrences involving impaired drivers, break and enters, collisions, OPP will rely on public relation officers with their local detachments like in Northumberland who do an amazing job relaying daily incidents to the public. But when it’s a major investigation like yesterday, the Criminal Investigations Branch (CIB) of the OPP come in and take over. They are the ones who decide what information, if any is released. Not corporate communications.

No one including Today’s Northumberland would ever think of jeopardizing an investigation with releasing information that shouldn’t and could compromise anything to do with the investigation.

But with today’s technology people have police scanners. And unfortunately will use them. At times possibly releasing information that could possibly compromise a investigation. Yesterday “news” agencies released information before police did. There has to be a compromise.

It will definitely be an asset to police agencies across the area when they go encrypted and are not able to be picked up by scanners – at least legally.

In small communities like Trent River with no information being released from OPP about a shooting anxiety is through the roof. And a suspect wanted for a serious crime is on the loose. It took 14-hours to release anything.

This isn’t the first editorial that Today’s Northumberland has written criticizing communication with OPP during major crimes.

In May 2020, it took almost two days for the first press release to be issued about a suspicious death in Cramahe Township that was later confirmed as a homicide. No suspects have been arrested in that case.

The editorial grabbed the attention of higher ups within the OPP organization as the Detective Inspector at that time read the article and asked to meet.

We did. We explained. And it’s embarrassingly apparent for the OPP that nothing has changed since.

So, the public has received the first press release stating they are currently investigating a shooting in Trent River with one person in critical condition and have identified a suspect.

If tradition holds true, the next release (whenever it comes) will identify the OPP Detective Inspector who is in charge of the case and will give other basic information.

But given that a suspect has been named more than 17 hours ago, the public still has many questions that can, and should be answered in a timely fashion.

Is there a photo of the suspect?

Is he from the area?

Is a vehicle involved?

In the time span of 17-hours, maybe if the information had been released sooner a vehicle or a sighting of the suspect may have happened. No one can say for sure at this point. Unless the suspect has been captured and the public hasn’t been informed.

After the roadway was opened yesterday on Centennial Lane in Trent River a release could/should have been issued stating that.

It may have been a minor release in terms of information, but it would have eased the minds of area residents.

The OPP are an amazing service with the finest of investigating officers in Canada.

But in this investigation and many previous investigations when it comes to informing the people they serve – they fail miserably.

OPP Corporate communications, OPP CIB and Commissioner Thomas Carrique have to do better in terms of serving the public.