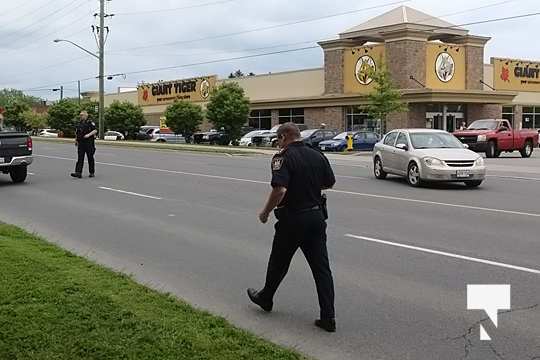 Nicholas Shawn Patrick Dillon and Ashley Ann Fenton were both charged with attempted murder that took place in Port Hope on June 20, 2019.

They were both also charged with committing an assault with a weapon, aggravated assault and breach of probation.

Dillon was charged also with attempted murder, dangerous driving, fail to stop for police, assault with a weapon and breach of probation after a police officer was injured on Peter Street later that day.

The defendants appeared in court on January 21/22, 2020 in Cobourg Court. Crown Attorney presiding was Russell Wood and defense attorney for Dillon was Tom Balka and for Fenton, defense attorney, Mark Jacula.

Court heard sometime between 9:00 am and 9:33 am Dillon and Fenton attended a Stanley Drive address and started yelling and arguing with numerous people.

After being told to leave several times, Dillon and Fenton left the residence and went to a parked vehicle nearby on Pochon Avenue where the victim was sleeping inside.

Dillon entered the front of the vehicle and started attacking the victim, punching and slashing the victim with a knife.

At the same time Fenton opened the rear hatch of the vehicle, picked up a aluminum snow brush from the vehicle and started striking the victim with it.

The victim was able to open the vehicle door, get out of the vehicle and onto the ground.

Dillon and Fenton continued to attack the victim outside the vehicle striking him with the snow brush and swinging the knife at him.

The victim sustained defensive wounds to his left hand finger and wrist but he was able to disarm Dillon and run away with the knife.

Both Dillon and Fenton then fled the scene in a black Chevrolet Cruze.

Police attended, and shortly after the victim was transported by ambulance to the Northumberland Hills Hospital in Cobourg, then transported to St. Michaels Hospital in Toronto where he was treated for his injuries to his chest, head and hand.

The victim was released from the hospital later the same day.

Police in the area searched for the suspects, who later returned to Port Hope that day and attended the Giant Tiger Store on Peter Street.

Dillon was located sitting in the Chevrolet Cruze. When approached by police, defense counsel said Dillon panicked and, in an effort at escaping, reversed his vehicle, resulting in an officer’s leg being pinned between the Cruze and the vehicle parked next to him.

Dillon then put the vehicle in drive, spinning the officer around and landing on the hood of the vehicle. The officer was thrown off the vehicle as Dillon proceeded across Peter Street and into the westbound lanes. The officer suffered soft tissue injuries as a result. Dillon was subsequently arrested after his vehicle went off the roadway a short time later on Caroline Street.

Fenton was located at approximately the same time on foot on Peter Street fleeing the area of Giant Tiger.

Both transported to the Port Hope Police Station where they were booked and have remained in custody since that date.

They were both bound by probation orders at the time with a requirement that they keep the peace and be of good behaviour.

Fenton plead guilty to assault with a weapon and fail to comply with probation order.

Fenton was in custody for 216 days, received a suspended sentence plus 18-month probation order, report to probation officer, provide a DNA sample and a 10-year weapons prohibition order and to have no contact with the victim.

Dillon plead guilty to assault with a weapon, fail to comply with probation order, dangerous operation of a motor vehicle and assaulting a police officer.

Dillon has been in custody for 217 days which court heard was equivalent to 326 days. He was given an additional year in jail, along with 18-month probation, report to probation officer, provide a DNA sample, driving prohibition for two years, weapons ban for life and a no contact order with victim.

At Extendicare Port Hope, Kindness Is A Rock Garden

https://www.youtube.com/watch?v=XDyw0mKNy28&feature=youtu.be By Cecilia Nasmith/Today's Northumberland There's something new at Extendicare Port Hope to bring a badly needed smile these days –

Ontario Protecting the Most Vulnerable During COVID-19 Crisis Province commits over $1.3 million to Northumberland County to help food

https://www.youtube.com/watch?v=coEMGcDZbKY A truck hauling peat moss flipped over on the eastbound off-ramp of Highway 401 at County Road 45 on