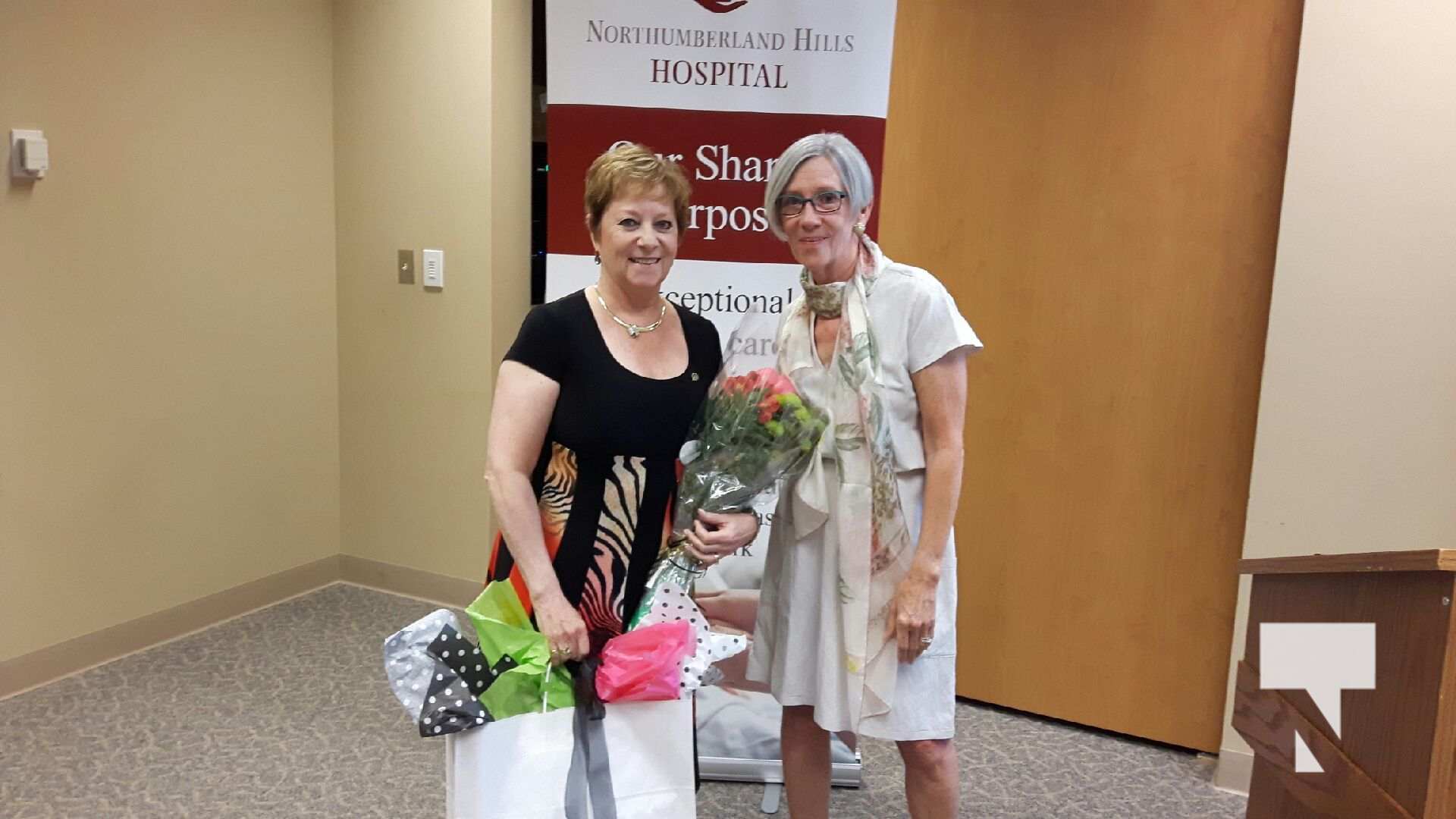 By Cecilia Nasmith/Today’s Northumberland
Any given year brings its share of triumphs for Northumberland Hills Hospital, but the report on the 2018-2019 fiscal year at the annual general meeting brought extraordinarily glad tidings – a year-end surplus.

McLean credited cost-saving initiatives and a welcome base-funding adjustment that finally came through from the Ministry of Health and Long-Term Care. As a result, the hospital reported $75,267,518 in expenses for the year set against $76,000,860 in operating revenues.

“We continue to work co-operatively with the Ministry of Health and community partners, not just to maintain but enhance vital services for the benefit of all patients we are honoured to serve.”

Retiring board chair Elizabeth Selby extended recognition to critical partners like the NHH Foundation, through whose creative efforts the hospital receives exceptional community support, and its retiring chair Tyler Hathway.

The foundation’s board, volunteers and staff raised $3.15-million for the hospital last year, Selby said – even more than they had budgeted for.

It helped fund the purchases of new surgical scopes, a neonatal warmer, new mammography and fluoroscopy unit, and a Sara Flex patient lift.

More and more vital equipment and the technology backbone on which it rests needs to be replaced, she added. Since the hospital opened its doors in 2003, the foundation has provided some $43-million for this purpose.

The NHH Auxiliary celebrated two milestones this past year under the chairmanship of Marg Hilborn – a 95th anniversary last fall and, in December, the 50th anniversary of their successful thrift shop, Petticoat Lane.

Not only did Selby praise the members’ consistently outstanding fundraising through Petticoat Lane and the Little Treasure Shoppe, but also the small army of more than 350 volunteers who enhance patient care.

“We know it’s the small gestures – a smile, help with directions, a friendly visit – that make the difference to patients and their loved ones.”

One outstanding achievement of the past year has been the successful introduction of real-time patient-satisfaction surveys.

“I do believe we have come through the challenges of recent years a stronger and more focused organization, better connected to our partners, our patients and each other,” Selby stated.

As Selby’s term as board chair expires, her success Pam Went paid tribute to her service on the board since 2014.

Her background in education has been a treasure, Went said, with administrative positions locally, in New Brunswick and at Nipissing University. She is also a past president of the Rotary Club of Cobourg and, as of July 1, will be District 7070 governor.

Her time on the board included such challenges as their request to the Central East Local Health Integration Network for a third-party review in relation to their chronic financial challenges. This led to the Hospital Improvement Plan and implementing efficiencies that were identified.

The Patient and Family Advisory Committee was a major innovation, Went added.

The change of provincial government after 15 years brought its own challenges, with the restructuring of so many agencies – from the LHINs to Cancer Care Ontario – into one big super-agency called Health Care Ontario.

Through it all, Went said, Selby has worked tirelessly to ensure the continued viability of her community hospital.

President and chief executive officer Linda Davis referred to a new normal, as she shared some highlights of the past year and some thoughts on what may lie ahead.

Simply put, need and demand are growing at a time when the landscape is changing in so many ways.

“Patient volumes have grown and, at the same time, the shortage of long-term-care beds and home-care resources have resulted in patients requiring to remain in hospital though they no longer require acute care. These are averaging 25% of our beds,” Davis said.

These patients are known as ALC (for alternative level of care), and – though a few local retirement homes are assisting for certain cases – no real relief seems imminent.

NHH is seeing the highest in-patient volumes ever, to the point that space once occupied by offices is being called upon for patient care to relieve congestion in hallways and in the emergency department.

“We thank our staff and our volunteers for their ongoing commitment to the patients and their families. It’s truly their effort that makes the difference between good care and great care.”

The uptick in their financial status has been one of the most significant changes, especially after the challenges of the Hospital Improvement Plan and the years of last-minute scrambling to achieve the balanced budget required by law at year’s end.

Of that surplus, the board voted to reserve $500,000 toward the Clinical Information System, which Davis considers an exciting prospect – “a fantastic opportunity for us to increase information flow, enhance safety in patient care, standardize information and a future opportunity to connect with care providers locally as well as regionally.”

More good budget news – a combined heating-and-power system soon to be implemented should save $100,000 a year in utility costs.

Continuing areas of focus will aim to enhance quality and patient safety, and they had a recent win when mental-health counselling was extended to child and youth patients through the partnership of their Community Mental Health Service with Rebound Child and Youth Services and Cobourg Community Counselling Centre.

Originally an outgrowth of patient-education efforts by chief of staff Dr. Mukesh Bhargava, PACE talks are now offered 10 times year. Timely health and wellness topics are spotlighted monthly, with recent topics including mindfulness, how to prepare for an emergency-department visit, cannabis and skin care. Many of them have been recorded and can be viewed at http://pacetalks.com.

Undoubtedly, this will increase the demand on such ambulatory services as dialysis and cancer care, and one foundation project will be a study to explore the feasibility of building a health centre on hospital property.

Under the new provincial government, Ontario Health Teams are being created, and one is in the works for Northumberland. Three key projects have been identified under this initiative – outreach to those in rural areas, community paramedicine services and peer support for those wondering how to navigate the system and what services to access.

“Next year looks to be another active and engaging year, and I am excited to be part of what lies ahead,” Davis said.