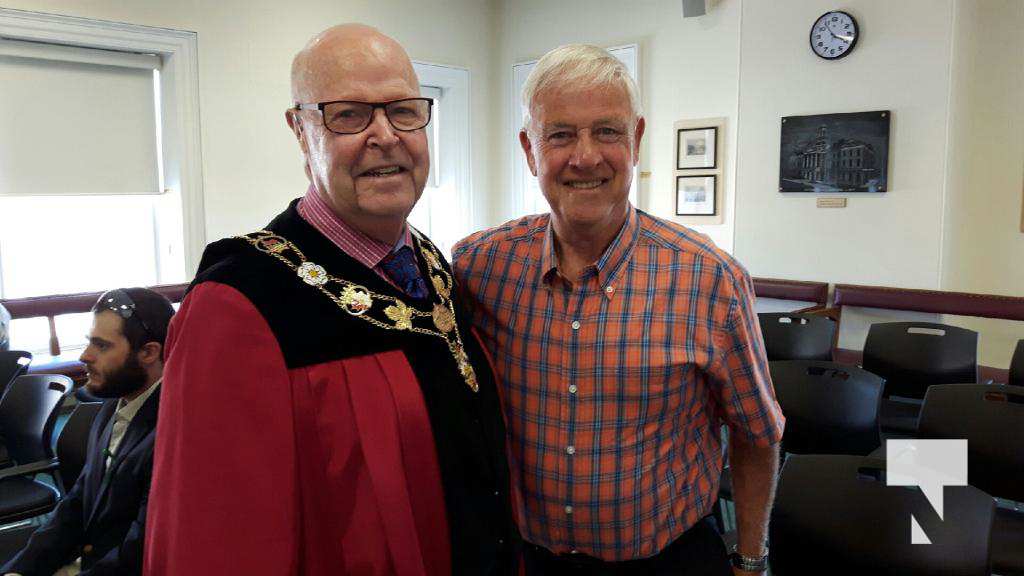 Cecilia Nasmith/Today’s Northumberland
Former Cobourg mayor Peter Delanty attended Monday’s council meeting to witness the vote to rename Coverdale Park after him.
Mayor Gil Brocanier related a long list of accomplishments even apart from the retired CDCI West principal’s time on council (and as mayor). He is a Rotary Club of Cobourg member who has also been active with a number of organizations, including Northumberland United Way, the Cobourg Public Library Foundation, Cobourg and District Historical Society and a number of municipal committees (most recently the Cobourg 2017 committee that celebrated the country’s bicentennial with many wonderful local events).
Brocanier added that Coverdale Park is near where Delanty and his wife Suzanne raised their family, and he is a long-time fixture on its tennis courts.
“I was very, very proud to put this forward for council consideration,” he said.
Mayor John Henderson invited Delanty to address council (and Councillor Forrest Rowden couldn’t resist warning him of the time with, “Ten minutes, Peter”).
“I am very, very honoured that town council and the mayor have given me this honour,” Delanty said.
“Serving as mayor of Cobourg was a great honour for me, and I was glad to achieve a great many things. This is kind of a culmination of the work they did, and I just happened to be the leader at the time.”
Delanty said he is looking forward to the unveiling ceremony, and plans to have his whole family attend.
“It’s very well deserved, Peter, and we will give you lots of notice for the official ceremony so you can notify your family and have them attend,” Brocanier said.