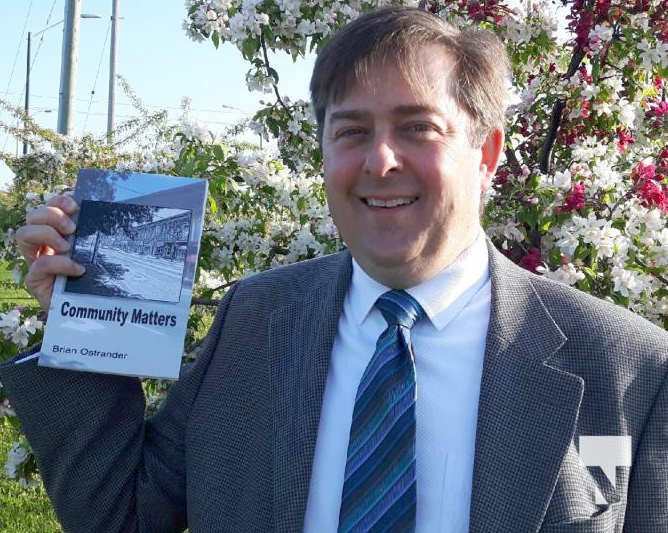 Cecilia Nasmith/Today’s Northumberland
Brighton Councillor Brian Ostrander believes Community Matters, and he has just published a book of the same name to explain that philosophy in more detail.
Hidden Brook press recently held a book launch, calling it “a no-nonsense account of what municipal leaders can do better.”
The author sees it as a way of sharing what he has learned and things he believes are not done enough.
“We don’t step out of our particular legislative box well enough,” Ostrander said in a recent interview.
It’s often said that municipal government is the level of government closest to the people, he continued, “and then we act like we are the board of directors of a corporation and we go in camera and we don’t tell people what’s going on.
“We can rail against it but, until we get people aboard that will change that, that’s how things will be.”
Ostrander admits that it’s no coincidence that this book comes out right in the time frame when candidates can declare themselves for the municipal election in the fall. And he has filed the papers to challenge incumbent Mark Walas as Brighton Township mayor.
“I fully intended for this to be a way to let people know where my thinking is and where I would like to leave my community,” he stated.
“As I was writing it, I realized it was a resource that could be used by any municipality from here to London, though there are examples that are Brighton-specific because that’s where my political education has come from. But it could certainly be used in Cramahe, Port Hope or London.”
It’s a relatively short book of about 50 pages, but it is written in many short chapters with intriguing names – Ask The Youth What They Think, Listen To That Grump In The Grocery Store, Fiscal Responsibility: More Than Buzz Words.
Though Ostrander was born in Etobicoke, he came to Brighton at a very young age. As a result, he grew up in a village that looked much like the cover of his book, which features a vintage photo of downtown Brighton from the collection of Anja Croes. Ostrander Travel was the business occupying the space where Mrs. B now sells her chocolate creations. West of there, his mom and dad ran their Radio Shack store and his grandmother operated the Clan Shoppe (which is still in business today).
Wanting to be a good steward for his home community, he would eventually serve on Brighton council – between 2003 and 2010, and again from 2014 to the present.
He was also inspired by his stepfather Al Zinck, to whom the book is dedicated. Zinck served more than 25 years on council for the former Town of Brighton (in those distant pre-amalgamation days). And when Mayor Lou Rinaldi left for Queen’s Park as a newly elected MPP, Zinck was chosen by his colleagues to fill in as mayor for the few remaining months of that term.
Now Ostrander has his own wisdom to share from years on council, and he sees Community Matters to some extent as a textbook that could be very useful.
“I think it would help inform people who want to run for council or people who are thinking of getting involved with their commmunity – how we can think outside the box, how we can be more engaging, how we can punt the communication ball forward a little bit better than we do.”
He has garnered agreement, to some extent, from former Port Hope and Brighton councillor Dave Cutler, who wrote a letter to the editor in a recent Brighton Independent. Though Cutler hasn’t always been in agreement with Ostrander from a political point of view, he did advance the opinion that anyone running for council should consider reading this book.
Ostrander also sees it as something of a civics textbook for local government.
“I have reached out to the East Northumberland Secondary School principal and offered to donate a copy to the library, and also enough copies for a class in civics,” he said.
They do teach civics as part of a course, Ostrand said, but he can’t help feeling that the time is right for civics to take the stage on its own.
In addition, Ostrander has donated a copy to the Brighton Public Library for anyone to read. And it can also be purchased at Lighthouse Books in downtown Brighton.