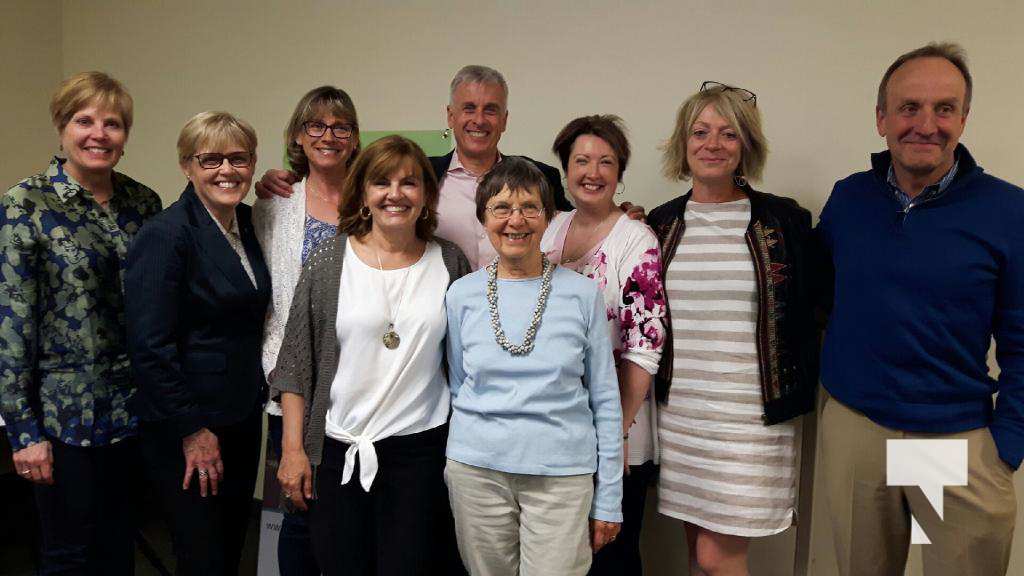 Cecilia Nasmith/Today’s Northumberland
Northumberland Hospice Care Centre campaign co-chairs Gord and Patti Ley announced Friday that their fundraising has just received a $1-million boost from the Read Elliott Family Foundation.
Gord Ley gathered project staffers and volunteers and supporters at the Community Care Northumberland Cobourg office to make the announcement.
“It’s one we felt was important that the community hear before we go public on June 5,” he said, referring to the official launch of the capital campaign.
“There are naming opportunities for major donors – for Kym and Brian Read, it would be to name the hospice-care wing after their foundation, the area that houses all the residential rooms in our facility.”
The Reads are the former owners of Horizon Plastics in Cobourg, founded by Clay Elliott, and both families have a long history of giving back to the community through their support of the Cobourg Community Centre, the Northumberland Hills Hospital Foundation and Attitudes For Education scholarships sponsored by the Clay Elliott Scholarship Foundation.
The Reads were approached in February by Patti Ley and campaign director Lynda Kay, and Patti Ley recalls that a lot was riding on their response.
“These things start with a need and are followed by a response to that need,” she told the group.
“As more people get involved, it turns into a vision.
“We were at a critical junction in the process. The project was in need of champions that are community builders who are willing to step up.”
While the donation was a godsend, she added, its value was more than monetary.
“Outstanding members of the community like the Reads provide the passion, the legitimacy, the momentum – this gift says, loud and clear, ‘Our community is better for it. It’s a worthwhile endeavour, and we want to support it.’
“We recognize that, without such leadership, it might be at risk. We are overwhelmed by their philanthropy, their generosity, and we thank them very much.”
Gord Ley says it is evident that there was no hesitation in offering the gift.
“They recognized immediately the impact of this. My sense was that Kym supported it from the heart, and certainly Brian supported it from the heart. But being a very successful businessman, he looked at the logistics, of course, and he was so impressed.
“It was nice to get that sense of credibility and accomplishment, knowing it spoke to them in those ways.”
Words of praised were offered to building committee chair Stewart Richardson for his work to date. The land has been purchased, a Cobourg parcel on Ontario Street, north of Highway 401 and south of the Cobourg Alliance Church. It is now being cleared, and a sign advertising the project will soon be in place. If all goes well, the first shovel should pierce the ground in September or early October.
Patti Ley offered her own thanks to the back row, which consisted of the volunteers who currently provide hospice and palliative-care services in community settings through Community Care. Without their devoted work, she said, the project could not have happened.
Plans continue to evolve, and this will become clear at the June 5 event. For instance, the single-storey building originally planned will now have two floors. And the six beds the province agreed to fund has grown to 10.
Provincial funding provided for the operation of six beds, Gord Ley explained, “but we know the demand from our community down the road will be greater than that. Rather than build six beds, then renovate for 10 and disturb the residents, we are doing it now.”
The government did indicate the committee should plan for 10 beds, his wife added, and funding will eventually catch up.
This will have an impact on the original $7-million campaign goal, she suspects – but updates will be provided June 5.
“On behalf of Patti and myself, I have to say this has probably been one of the most rewarding experiences we have had as fundraisers,” Gord Ley told the group.
In the past, they have worked hard on behalf of the Cobourg Community Centre, Northumberland Hills Hospital, YMCA Northumberland and Northumberland United Way, he listed.
“This is a completely different kind of campaign, and the response we are getting from the community is different from anything else we have ever seen.”
As they approach groups and individuals for donations, they find the people they talk to fall into one of two broad categories.
One group has had experience with hospice services received by a loved one, and they recognize how invaluable this kind of help was at a difficult time.
“Their stories are just so emotional and so compelling – and they don’t need to hear anything more,” he said.
“The other group are people with regrets that we haven’t had this in our community, who lost a loved one who could have really benefited from that.
“We are making a pledge that there will never be a sense of regret again in our community for that reason.”