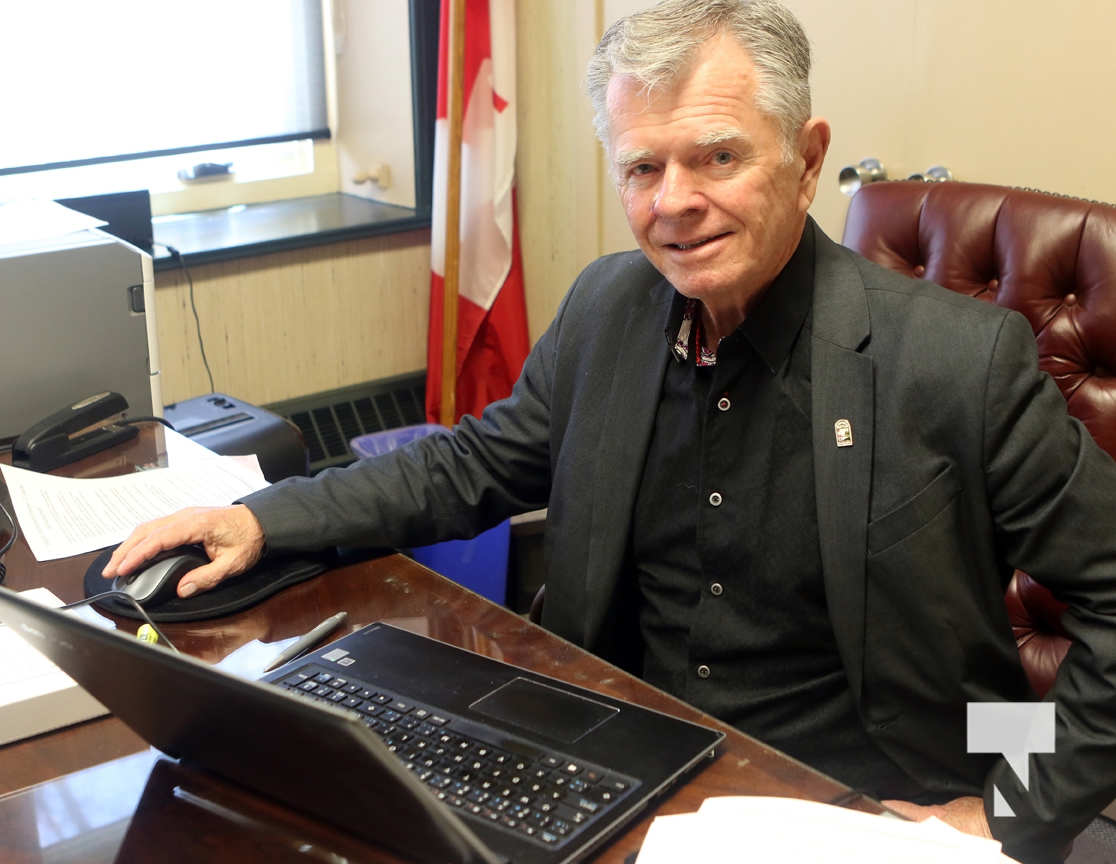 Bob Sanderson is running for his second term as mayor of Port Hope.
Speaking to Today’s Northumberland Sanderson said he filed the papers Wednesday afternoon.
“The job is not done,” Sanderson clearly stated.
“The decision is one I took very seriously. I think Port Hope is more unified then it has been in the past.” From projects to strategic planning, Sanderson stated they are on course, but they’re not finished.
“The next part, frankly is going to be a bit more fun in getting things done, but the PHAI (Port Hope Area Initiative) project is going to start and it’s a critical component in the interest in the community and with the federal government.”
Growth is inevitable, but Sanderson clearly states, “we want this to remain a community. We don’t want it to become a city. We have a good balance of urban and rural and I think that’s been stable for awhile.”
As mayor, Sanderson wants to continue to lead for the next term.
“Maintaining the leadership, maintaining the structure that we’re building, succession planning, proper hiring, cleaning up things that I think needed to be cleaned up and I’m not prepared to leave it unless the public chooses.”
With the work he’s helped accomplish there was no other choice to run to complete the goals he has started.
“I see a lot of changes and I feel very responsible for a lot of staff.” Sanderson has a “casual” approach with staff in the municipality which has allowed them to be more comfortable.
When the municipality first started functioning without a CAO, even Sanderson admits he wasn’t sure if that would be a sustainable.
“But with the development of the directors and working together we have a board of directors that works well with council direction and implementing. They also come forward with proactive decisions on their part.”
But the new structure needs a bit more time and development.
“I think it’s imperative not to break stride right now.”
Holding the position as mayor was something new for Sanderson. His only other political experience was in 1979/80 he was a councillor for a two year term. Most of that time on council was dealing with the catastrophic flood that hit the town.
Looking back to this point Sanderson said the position in some cases is more that he thought it would be, “but I also feel very supported, so the good is much better then I thought it would be.”
It also helped that during his first term as mayor there was a fairly fresh council elected.
“This is one of the reasons why I’m declaring early. People need to know and feel comfortable.”
“I’m hoping that having a sustainable leadership role, more people will step up and run for council.”
“They know how I am and what I do. They are comfortable and the structure of the staff is that we’re not fighting all the time, we’re not under angst.” Sanderson is not someone who is in the public eye a lot, but his door is always open and he’s always putting his time and effort towards the community..
“That’s my nature. I’m not a micro manager. There isn’t enough time in the day to see everyone.”
“I also have a lot of faith in the people that I work with and I have regular interactions with them.”
“I expect people to do the job, come in and talk to me, that’s the leadership and then the other part is to tie that in to the other councillors and to the public.”
“The door is always open.”
Officially Sanderson is the Mayor of Port Hope, but he doesn’t consider himself a politician.
“I think I have some attributes that some politicians have, I like people, I care about people. I want to see things done, but I don’t consider that being political.”
“It’s a corporation we are running here, and we run it in the interests of our shareholders which are the public. Not every shareholder is going to be happy, but overall then the implementation of the strategic goals of the corporation really represent what the people want and if they don’t buy into it, then that’s what elections are all about.”
Sanderson said the next four years are very important to Port Hope.
“Economic growth is coming.” People are wanting to move into the community, the financial situation in Port Hope is stable.
Growth is inevitable, whether it be residential or business and working well with other municipalities on issues like having the GO train come to Port Hope is instrumental.
“It wasn’t even on their radar. And no GO is coming. We have developers coming and talking to us. The feedback on our planning department – we are almost inundated. The river walk is not finished.”
“My job isn’t finished and I feel qualified, I feel the track record is there and I’ve done virtually everything I said I’d do up to this point. Now it’s time to look ahead.”