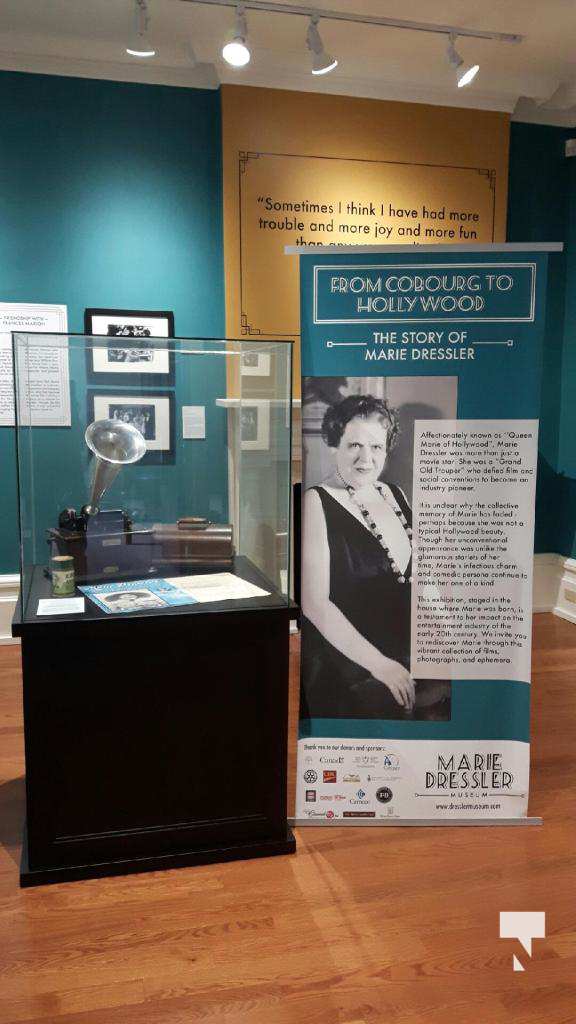 TODAY’S NORTHUMBERLAND Cecilia Nasmith
Though the Marie Dressler Foundation is taking a time-out for a few weeks, Dressler House should be open again soon. TODAY’S NORTHUMBERLAND Cecilia Nasmith
Hours are changing at Dressler House, so this sandwich-board sign will be placed on the sidewalk in front of the house as an invitation whenever its doors are open. TODAY’S NORTHUMBERLAND Cecilia Nasmith
The collection at Dressler House is largely digitized now, with iPads to help you navigate your way through it. TODAY’S NORTHUMBERLAND Cecilia Nasmith
Photos and backgrounds at Dressler House tell the story of Marie Dressler both on-screen and off. TODAY’S NORTHUMBERLAND Cecilia Nasmith
Marie Dressler Foundation president and chair Rick Miller is seen with one of his favourite photos of the Hollywood star who was born in Cobourg. TODAY’S NORTHUMBERLAND Cecilia Nasmith
Along with her stage and screen credentials, Marie Dressler was a musical-comedy star. An authentic wax-cylinder recording of her voice, suitable for play on a gramophone, is part of the collection at Dressler House. Cecilia Nasmith/Today’s Northumberland
Celebrating the 150th anniversary of the birth of Oscar-winning actress Marie Dressler would have been big news for the Marie Dressler Foundation at the best of times.
As it happens, the landmark comes at the most challenging of times, when the actress’s birthplace at 212 King St. W., Cobourg, is inevitably in for changes.
The hard work of a devoted committee (among the most notable members of whom were the late Ed Haynes and Bill and Delphine Patchett) effected the 1990 rescue of the little Ontario cottage. It had been a high-end restaurant for decades when it suffered a catastrophic fire. The committee wanted to ensure it would be rebuilt.

Bill Patchett’s dedicated fundraising, along with Haynes’s and Delphine Patchett’s leadership, saved the day. The town ended up purchasing the building and setting aside space within for Marie Dressler memorabilia, which the committee lost no time gathering. The town also used several of the rooms for certain departments, like tourism. As well, the then-Cobourg and District Chamber of Commerce was delighted to move into the premises out of its office in the Victoria Hall basement.
Over the years, one tenant after another has moved out of Dressler House. With the recent departure of the economic-development office, the Dressler museum is now the sole tenant.
And the word “museum” certainly applies after the amazing renovations almost two years ago, Marie Dressler Foundation president and chair Rick Miller said in a recent interview.
The collection has been largely digitized, with iPads offering access to stills, film clips and other information about the star who went on to win an Oscar and become a top box-office moneymaker for the MGM Studios in Hollywood. There’s also a great variety of stills and posters on the walls, as well as artifacts like Marie’s actual star from the Hollywood Walk of Fame and a gramophone plus authentic wax-cylinder recording of the musical-comedy star.

It’s a professional set-up, right down to the museum-quality paint on the wall, Miller said – it’s an English brand that the company donated through its Port Hope distributor Kingsmill Kitchens.
With no office operating out of the building, Miller said they can’t just leave the door open to admit visitors during business hours. But plans are being made for that development, even as they make more jubilant plans to celebrate the 150 years since Marie Dressler was born in that little cottage.
Plans kick into high gear in the fall, but first they have an idea for a different kind of kick-off.
Movies In The Park is always an eagerly anticipated family outing over the summer, and one of those movies is always part of the Sandcastle Festival.
Marie Dressler Foundation president and chair Rick Miller has learned that this particular movie is always attended by 1,500 to 2,000. And the foundation has arranged to be part of this year’s screening on Aug. 4.

The idea draws on that time in Marie’s life before she really became a star, at the turn of the 20th century. While she performed when she could on Broadway, she also ran a concession stand on Coney Island, selling peanuts and hot dogs with the Marie Dressler name.
Happily, she eventually got too busy with her Broadway work and sold this sideline business. But for Aug. 4, the foundation will help sponsor popcorn sales for the movie, at the token cost of $1 per bag. Then, moviegoers will see an entertaining trailer on plans for the upcoming Marie 150 celebrations. It’s great publicity, Miller figures, in that it will reach a demographic that might not otherwise be aware of the landmark.
Meanwhile, he added, there’s the museum to enjoy, with its free admission.
Sept. 8 through Nov. 10 will bring the big Art Gallery of Northumberland exhibition that focuses on the community’s continuing connection to Marie, as well as the actress’s own accomplishments and significance.

The exhibit will include some amazing first-person film clips of landmark events in the life of Dressler House, as well as the extraordinary chance to hear three authorities lecture on different aspects of film history – Art and the Cinema, Music and the Cinema, and Stage and Cinema.
“Three blockbuster lectures, free to the public,” Miller summed up.
Foundation volunteers will approach local high schools to encourage class visits for a chance to learn more about the importance of heritage, the significance of history and how the community has connected to the actress and what she stands for – and, of course, they will offer a reminder of the museum just steps from downtown at Dressler House.
Miller expects tickets will soon be sold out to the Sept. 14 event at Victoria Hall, Women And Hollywood, as the Victoria Hall Concert Hall only has so many seats – so anyone wishing to enjoy this event should plan accordingly to enjoy the two speakers.

Matthew Kennedy, author of Marie Dressler – A Biography, finished his research in Cobourg 15 years ago and returned for the opening of the refurbished museum in 2016 (at which time, Miller said, he gave a wonderful address at a celebratory dinner). His talk will be on Marie as a social activist.
Documentary filmmaker and author Cari Beauchamp (twice named film scholar for the Academy of Motion Picture Arts and Sciences and currently fulfilling that role for the Mary Pickford Foundation in Los Angeles) was recently in the news sharing her perspectives on the infamous casting couch in the wake of the Harvey Weinstein accusations.
Beauchamp also wrote a recent article in Vanity Fair about women in the film world.
She told of a retreat she and other female filmmakers went on in 2000 to ponder why they were not breaking through despite having as much talent as their male counterparts. They came up with a 20-year plan and, as 2020 nears, Beauchamp revisited it.

Ironically, their goal is to get closer to that 50-50 equality behind the camera that women actually enjoyed in the 1920s and early 1930s.
“It’s not just for the film-o-holics,” Miller said.
An official birthday party is planned for Sept. 29, a ’30s-themed evening called Dinner At Eight at the Best Western Cobourg Inn and Convention Centre. Along with an actual showing of the movie, the evening features a red-carpet entrance, as well as a menu and dinner music from the ’30s.
The Town of Cobourg has declared Nov. 9, the actress’s actual 150th birthday, as Marie Dressler Celebration Day. By that time, the foundation will have already hosted such a long line-up of events, Miller said, but they are working on plans for this big day as well.
But all the while – during the celebrations, as well as before and after – the museum will be open in spite of the town’s having finally vacated the Dressler House with the exit of the economic-development department to new premises at the Venture 13 building.

The town still owns the building and is financially responsible for all aspects, Miller pointed out (except for the janitorial services the foundation has assumed).
The new electronics at the museum are energy-saving features like low-energy LED lights that go on and off depending on if a room is occupied and iPads that go to sleep at night or when otherwise not in use.
The foundation will be utilizing volunteer staffing for the museum, and Miller sees a Friday-to-Sunday schedule (possibly 11 a.m. to 3 p.m.) to take advantage of peak traffic times. An actual schedule should soon be posted on the door, he said.

By the end of June, they hope to have a summer staffer, thanks to a Federal grant. The student will set the hours for a five-day-a-week operation, and the revised schedule will be posted.
A sandwich-board sign has been procured, which will be set out in front as an invitation whenever the doors are open.
For the next few weeks, Miller said, the foundation is taking a time out to finalize a plan for future operations.
For the longer term, Miller said, any one of a number of things could happen.
The town is entering into a Cultural Master Plan process, and he expects that it will result in Dressler House being declared a cultural asset rather than a surplus property. If for any reason they decide to dispose of it as a surplus property, he added, the foundation’s agreement with the town gives it first right of refusal on its purchase.