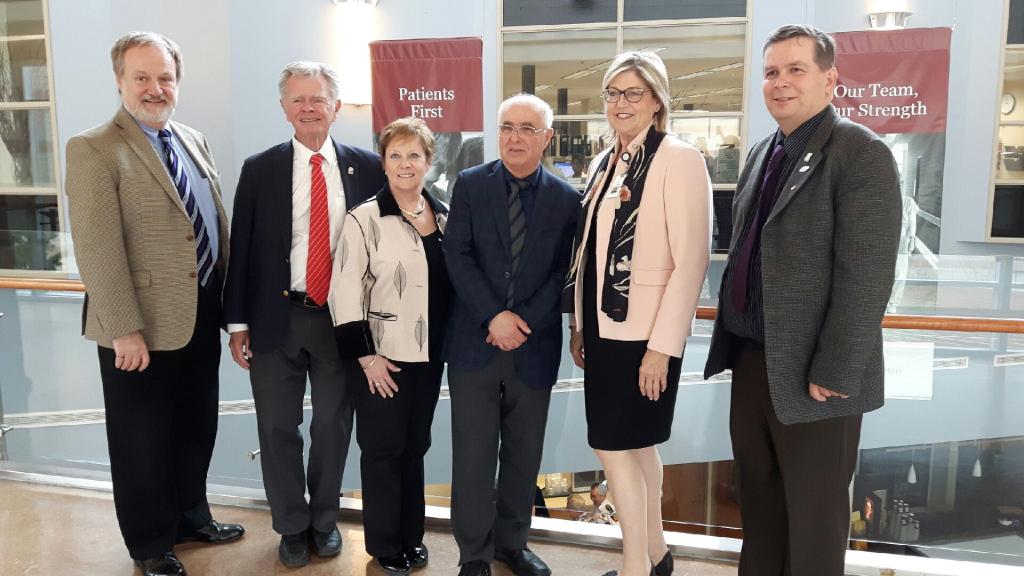 Cecilia Nasmith/Today’s Northumberland
A room full of dignitaries and supporters gathered in the Main Street Bistro at Northumberland Hills Hospital Thursday to learn of a $4.1-million boost to hospital coffers from the province.
Northumberland-Quinte West MPP Lou Rinaldi made the announcement, breaking down the amount into $2.3-million in sustained year-to-year base funding and $1.8 as a one-time grant to help with surge beds that will help the hospital deal with surges in the patient population of the kind it has experienced over the past year.
This is part of $822-million in additional funding being added to funding for Ontario hospital sin the 2018-2019 budget year.
Hospital president and chief executive officer Linda Davis reminded Rinaldi of remarks he had made in that very spot in July 2016.
“You acknowledged the significant struggle we were having then to keep ahead of rising local needs and infrastructure pressure,” Davis said.
“You said at the time that health care is changing – either we adapt to change, keep up with the times or fall behind.
“You recognized the changes NHH had made with our hard-fought battle for efficiencies and our Hospital Improvement Plan to take $1.6-million out of our costs.
“You brought us an increase of $600,000 funding, and we were very, very grateful. But it wasn’t enough.”
The following May, Rinaldi brought news of an additional $840,000 to base funding. Again, Davis said, they were very, very grateful, but it wasn’t enough.
This struggle dates back to 2003, when NHH opened. A structural deficit was soon evident, she said.
“The services we provided grew at the larger hospital, and the funding we were receiving at the time just didn’t keep up, and we weren’t able to find enough efficiencies to add up to a balanced budget.”
As for surge, she said, last year brought a dramatic increase in patients that, at times, put the hospital at 120% capacity.
“It slowed down their capacity to treat patients in a timely manner in the ER,” Davis noted.
Rinaldi said the province is striving to move health care to the level needed in Northumberland County and throughout Ontario.
“Linda, you and your team, the board, the foundation – you have a tough job. You have a tough job. You don’t know when that emergency bell is going to go off. You don’t know when that ambulance is going to roll in. But you are always ready,” Rinaldi said.
“We have an aging population, so the demands on our health-care system wil not be diminished.
“The board works really hard to crunch those numbers You are very financially astute. You are very conscious of the costs. From what I see, you are doing a fantastic job.”
Davis said Rinaldi had been relentless in making this good news happen.
“We are caring for a huge and growing population, and we do it with a fabulous team – I know they are very excited to learn about this,” she said.
The $2.3-million will not only mean NHH can afford to continue providing the services it now offers, but also potentially looking into other areas of health-care where they might be involved.
The $1.8-million will allow them to provide for patients over and above their capacity.
“We are budgeted for 92 beds, and we are stretching it to 96. This will allow us to go to 108,” Davis estimated.
“There are times we have had 115 people in our building and others in emerg, so we know that will happen. But this will allow us to really provide that continuity of care for those patients.”
Along with surge, a major budget challenge is ALC, which stands for alternative level of care. These patients are no longer in an acute condition and could be discharged if an appropriate bed (in a long-term-care facility, for example) were available. If it is not, the patient remains at NHH, occupying a hospital bed that might be otherwise used for an acute-care patient, being cared for at the level of care provincially mandated for ALC patients.
Davis has pointed out at many hospital-board meetings that it’s a problem common to many Ontario hospitals.
“Although we are certainly prepared to care for patients that require ALC, they are much better in a home-like environment,” she said.
“We are going to relieve some of that pressure, but we will talk about that another day,” Rinaldi pledged.
“There’s a bottle of champagne somewhere down the road.”