Local Author Draws On Her Own Memories for Compelling Stories 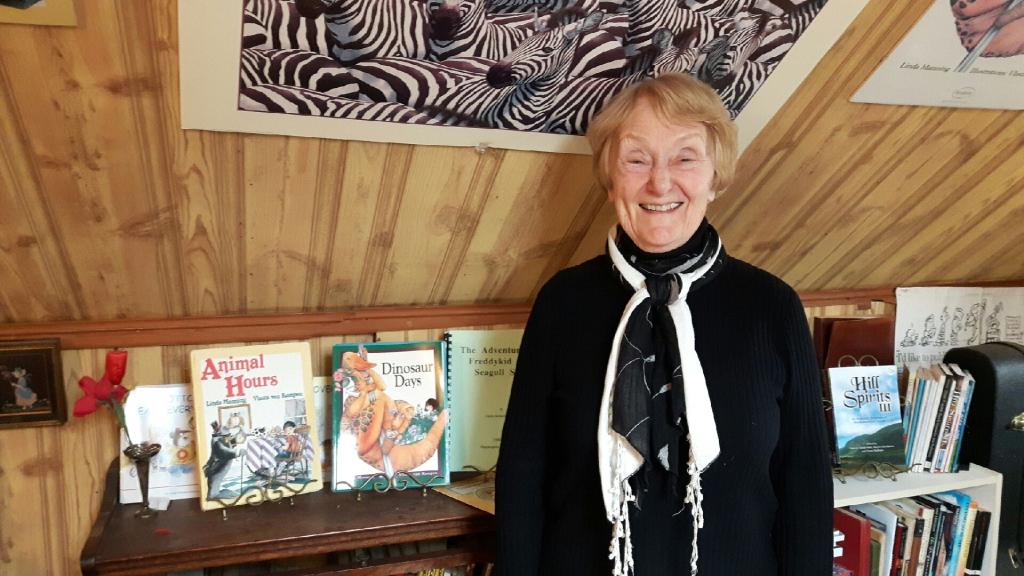 By Cecilia Nasmith/Today’s Northumberland
Linda Hutsell Manning has drawn on her own Cold War fears and today’s headlines to produce a short story that has been accepted by the Danforth Review.
A Balancing Act is the story of Margaret, a mother haunted by a screening of the ABC-TV presentation The Day After, a fictionalized account of what life is really like for survivors in a Kansas community near where a nuclear bomb was dropped. Its images travel with her as she leaves the library where it was shown and after she arrives home.
She has to put on a brave face for her husband and children, and manages to sneak in a quick private cry among the mechanics of seeing to their evening needs. Pushing the interior Cassandra voices of doom aside, she carries on as best she can.

Hutsell Manning thinks there’s a good dramatic interplay between unvoiced terror and providing for domestic tranquility,
From alleged incidents where the Russian military suspected an incoming attack but yielded to the instinct that they were mistaken, to the novel Failsafe where they had the opposite reaction and a fatal response to an innocent fighter-pilot error – the sense of threat was palpable during the Cold War.
And not just in the US, Hutsell Manning said, Some Canadians went ahead and built bomb shelters, and she has spoken with some who were told as children to duck under their desks in case of incoming missiles.

It’s a story she has wanted to complete for years, and she recently gathered various drafts of it dating as far back as 1983 (about the time ABC aired The Day After, she noted).
“Look at the typing,” she marvelled, looking at a 1990 draft. There were also drafts from 1992 and 2001, when she began taking it to her Spirit of the Hills writers’ workshop meetings. Over that time, the title changed from A Change of Priorities to A Balancing Act.

Two things spurred her to craft a final version. One was an Aug. 3, 2016, Washington Post article about “fingers on the button” and the other was the subsequent back-and-forth between US President Donald Trump and North Korean President Kim Jong Un that seemed to push the fabled Doomsday Clock closer to midnight.
Hutsell Manning was among the audience watching the ABC presentation when it aired 30 years ago.
“I was terrrified for the kids,” she recalled.
“I really worried about it. That film just wiped me out. It took me weeks to get over it, even though Margaret got over it in a day.”
Danforth Review editor Michael Bryson accepted the story right away, Only afterwards did she learn he is the nephew of her friend David Bryson who, in turn, is related to Alan Bradley, author of the popular Flavia de Luce mystery series. On a visit to town, Bradley confessed to Hutsell Manning that they had worked together on a local production of Oklahoma many years ago (though she admits she didn’t recall the young man who did the lighting and sound for that particular show).

At any rate, she is delighted to be in a publication as prestigious as the Danforth Review, which is exclusively an on-line magazine. And, as Bryson has just announced he is making the considerations for three stories for The Journey Prize anthology, she feels this is good company to be part of.
When not writing, Hutsell Manning keeps relatively busy doing readings and other special appearances, like her stint at Let’s Talk Books in Cobourg on April 28 (Independent Bookstore Day). Owner Julie Maynard is focusing on local authors, and Hutsell Manning has the 11 a.m.-to-noon slot.
Looking ahead, she is thoroughly enjoying another project that draws on happier memories of the ’60s – the one-room schoolhouse, like the one where she enjoyed a two-year teaching career.
Thirty-two kids from 10 families, eight grades in one room, two primitive toilets, heating by wood stove, big windows that were not quite suited to winter weather and admitted some of the snow – all were elements of life at SS2 Hamilton Township, the brick schoolhouse that once stood midway between Cobourg and Port Hope.

Hutsell Manning once saw a drama at Fourth Line Theatre about a one-room schoolhouse set in 1910, and said there wasn’t a lot of difference between that one and SS2. They just didn’t spend money on the schools, she said. She recalls begging for a new pencil sharpener because the old one chewed up the pencils, and encountering deaf ears.
Nevertheless, it was a job she loved, which is evident in the scrapbook she kept of her first year (1963-1964). She calls it her home-made yearbook and, though falling apart, it is a treasure.
The first part is set aside for the students, a page for each child, containing a smiling black-and-white photo of that pupil and a little bit about him- or herself, submitted in his or her own handwriting. The second part recounts the highlights of the year in detail, from the Christmas concert to the school trip to the Thousand Islands.

She remembers the reaction to the JFK assassination, some of the older kids crying, some of the younger ones fearful because they weren’t quite sure if they were in danger. She also remembers how excited they were about the Beatles. Four of the girls put on a Beatles concert of their own to raise money for the Red Cross.
She was pregnant her second year and not quite up to a second yearbook of that magnitude, especially since she was working three to four extra hours each night and 10 more on weekends. But that first yearbook remains a cherished possession.

Hutsell Manning’s research relies heaviily on talking to veterans of the system, students and teachers alike, because so much documentation and memorabilia from the post-Second World War era has vanished – even though one-room schoolhouses would be fairly common for another 20 years after V-E Day.
The famous Hall-Dennis report came out during her time as a teacher, saying that every elementary teacher had to have a university degree. Her husband had moved the family to Guelph so, as a 30-year-old mother of three, Hutsell Manning enrolled in the university.

That’s where things changed, she said. She was most impressed with two professors of Canadian literature, and the feeling was mutual.
“I got better and better marks, and decided I could get my master’s,” she recalled.
“They said, ‘No, you don’t need a master’s. You have talent, You should be a writer.’”
To invoke a cliche, the rest is history.