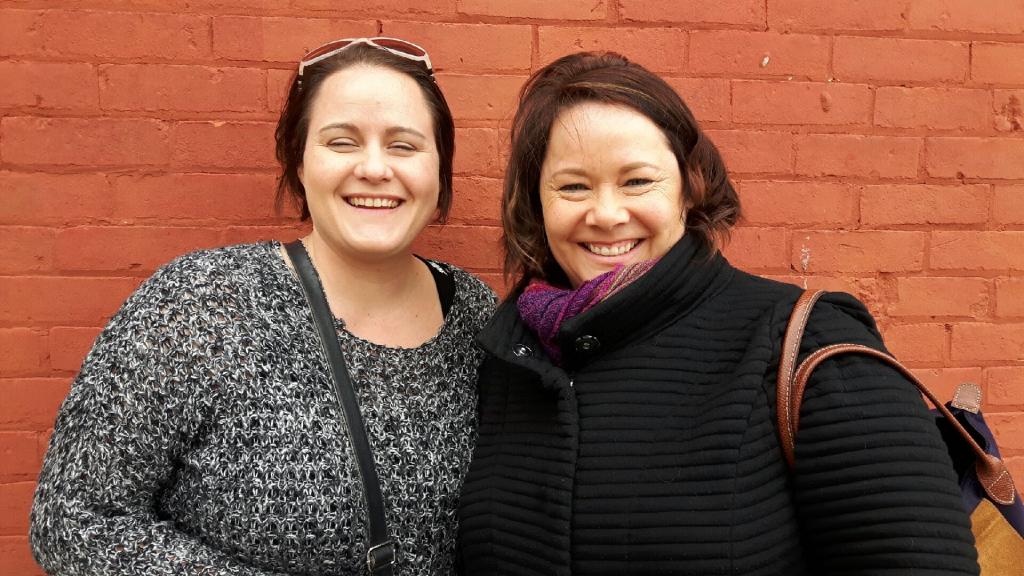 TODAY’S NORTHUMBERLAND Cecilia Nasmith
Melody Johnston (left) and Caryn McDiarmid are looking for help with the Flight To Hope 2.0 project, and one way is to attend the second annual World Food and Music Night fundraiser April 27.

By Cecilia Nasmith
Following on the heels of a wildly successful World Food and Music Night fundraiser last year to support Flight To Hope 2.0, a second one will take place April 27.
It’s in support of the on-going efforts of three local churches to assist Syrian refugee families, and the theme is East Meets West.
Starting at 7 p.m. at one of the partner churches (Cobourg’s Trinity United Church), food samplings will be offered, along with some great silent-auction items. Flight To Hope 2.0 chair Caryn McDiarmid of Trinity United Church has been scouring the local community for donations of goods and services to offer, and Melody Johnston (representing the Castleton-Grafton Pastoral Charge) listed some of the artists in the musical line-up – singer-songwriter Cale Crowe of Alderville First Nation, Madman’s Window front man Chris Devlin and, from Toronto, Esmael Abou Fakher and Rahis Fakher.
“They’re a Syrian couple coming, who are professional musicians,” Johnston said.

All told, this will be the third Syrian refugee family the three congregations have worked so hard to usher into Canada.
The Castleton-Grafton charge brought in a family of five in 2014. They lived in Cobourg for a year with assistance from the congregation and community volunteers, after which they moved to London for the improved economic prospects.
Through their Flight To Hope campaign in December 2016, Trinity welcomed Mohammed Ghrir and his wife Heba Kaerdi and their tiny toddler daughter. They are now established in Cobourg and have welcomed two more children.

On May 10, thanks to an 18-month-long joint effort of the churches, they will be joined by Mohammed’s widowed sister-in-law Malak Ghrir and her children. Her husband was killed in Homs in 2012, and she is the mother of a seven-year-old daughter and three sons aged 13 to 17.
The months since the Ghrir-Kaerdi family arrived are not such a long time frame, McDiarmid reflected in a recent interview, but they have brought regular news of the arrival of one refugee family after another. As a result, a strong and supportive community has developed.

After the first year of their sponsorship, families are free to move to a bigger city if they feel their prospects are better there. For example, they were able to bring over Mohammed’s brother. But as a butcher dealing exclusively with Halal meats, he had to live in a bigger community to find work, He is now settled in Mississauga.
On the other hand, Mohammad’s family seem content (as many of the others do) with the small-town atmosphere where one knows one’s neighbours, where a son can bicycle to the beach in safety and a daughter is making friends out of classmates.

Looking ahead, another family is expected in mid-June – a mother in her 50s and her two youngest children: the 14-year-old daughter they wanted desperately to have a better chance in life and her 25-year-old brother who wants to help make that happen.
This young man was a pharmacist, Johnston noted, so he brings a profession to these shores as well as a good knowledge of English.

One challenge in the year they help these families get on their feet is to do it in a way that is sustainable when that year is up, McDiarmid said.
“This is our third family – it should be like falling off a horse,” she said. But she is also well aware of the challenges.
“Teaching them how to live within our society and accept their new reality in terms of what it costs to live in Canada,” she cited as a key example.
“That’s very different from Syria pre-war.”

When the first family came in 2014, it was necessary to drive them to Peterborough for English as a Second Language instruction. Since then, the Link program at Sir Sandford Fleming College has proven invaluable in offering this instruction – but it may not be of use to Malak Ghrir, as it requires at least some rudimentary knowledge of English in the first place.
The Help Centre had received funding to provide these rudiments and prepare the newcomers for English instruction, though the future of this program is uncertain. The Flight To Hope 2.0 committee members just have to hope for the best, or at least hope the closeness of the Syrian community that has accumulated since the end of 2016 will be of help in finding some way to fill this gap.

The community has been generous in its donations of household goods, Johnston said, but they need financial support – an estimated $20,000 over the next year. They also need volunteers, and the most pressing need here is for drivers to transport the families around.
Anyone who can help is asked to call McDiarmid at 905-269-8411 or Johnston at 905-375-9789,
They also welcome everyone out April 27 for the World Food and Music Night at Trinity (284 Division St., Cobourg). Tickets are $20 for adults, $10 for children under 12, and $5 for those under five. They are available at the Trinity church office, McDiarmid said, and at the door the evening of April 27.