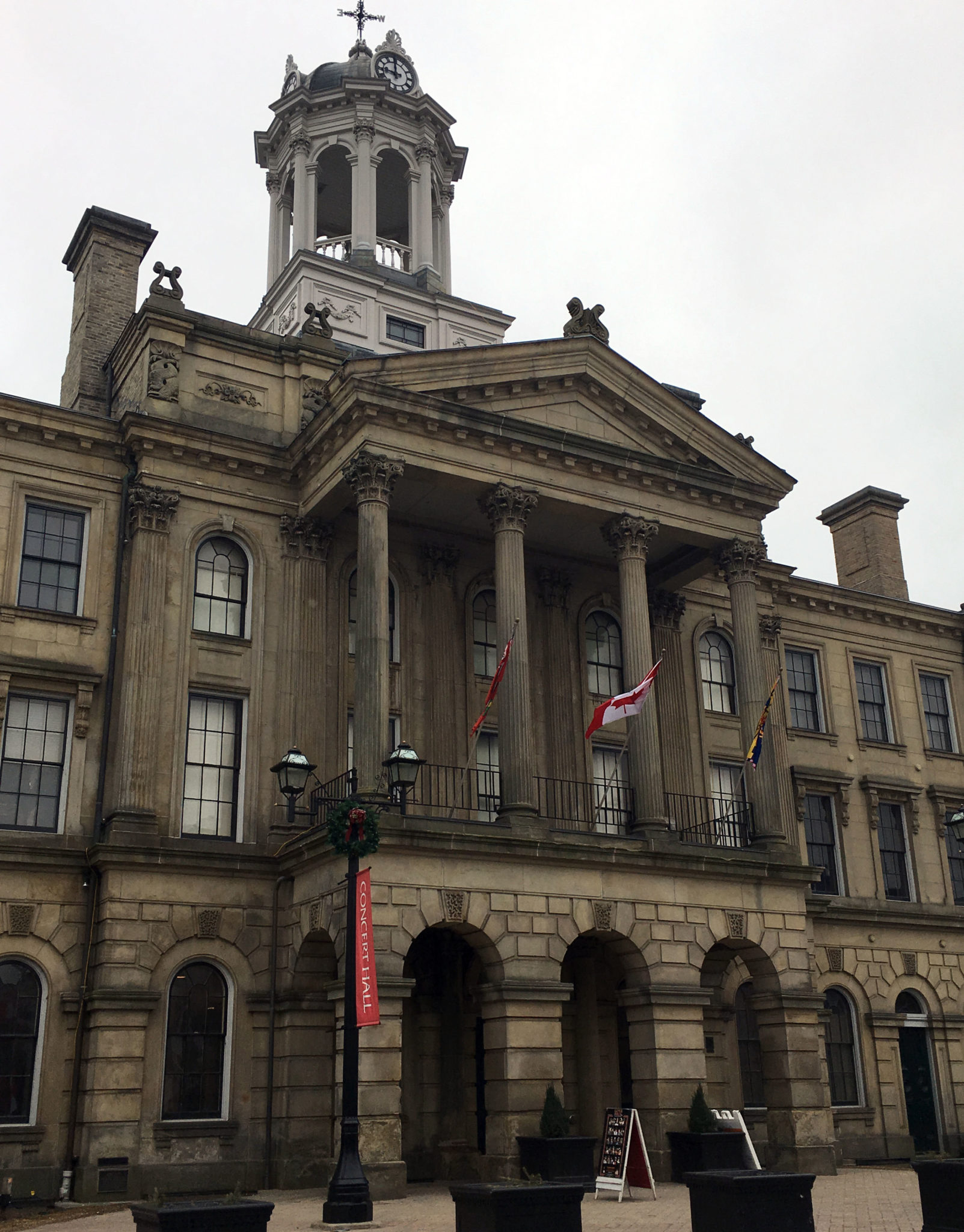 By Cecilia Nasmith
In the 1840s, it was a toss-up for pre-eminence among three major Canadian cities – Toronto, Kingston and Cobourg.
Cobourg’s quest for supremacy involved two main elements that, unfortunately, would ultimately fail.
John R. Taylor was in Cobourg this week to tell a tale of restoration, and how a dedicated group of people saved one of them – Victoria Hall – from demolition.
Now a British Columbia resident, Taylor was the first professional curator of the Art Gallery of Cobourg (now the Art Gallery of Northumberland) who also became the first executive director for the Society for the Restoration of Victoria Hall. Taylor made a presentation to Cobourg council April 2 to describe the book and documentary of the same name that he is working on to document that two-pronged attack of the 19th century, which he is calling The Grand Gamble. On April 4, he made a longer and more detailed presentation at the Cobourg Public Library for members of the public.
Taylor told the group that it was more than The Grand Gamble that brought him to Ontario. His other purpose was to attend the celebration of life for Bill Withrow, a long-ago colleague at the Art Gallery of Ontario.

It was Withrow and former Cobourg resident Paul Bennett who suggested him for the Art Gallery of Cobourg job in 1970. Coming to town for the interview, he first encountered Victoria Hall and was instantly captivated.
He described the evening drive through the downtown to meet with Dr. John Leeson, a gallery board member, and how he spotted it – “dark, somber, forlorn. I stopped the car and walked around the building. I was stunned,” he recounted.

He got the gallery job and also got involved with Victoria Hall, siding with what was at that time far from a majority opinion – that it must be saved. Only one councillor, Lenah Field Fisher, was of that opinion. Many of the main-street merchants would rather have had it removed in favour of a parking lot.
Taylor recalls that the cracks were visible, inside and out, and very ominous-looking. The engineering firm of Carruthers and Wallace was brought in.
“Because they are professional engineers and they are liable if they don’t tell the truth, they said the building must be vacated,” Taylor said. Occupants of the building were told they had to be gone by year’s end.

It was discovered that any restoration would have to begin with the underpinnings, increasing and broadening the footings. One of his photographs on display showed a scene from this excavation.
At that time, the estimated budget was $1-million for this part of the job.
“Town council could not possibly do anything that was going to cost $1-million,” Taylor stated
“The population was 15,000, and there was not enough industry. That tax base would never support it.”
And, under the Municipal Act, the town could not solicit funds.

Councillor Fisher went to work putting a committee together, and Taylor was recruited on the strength of a letter he wrote to the Cobourg Sentinel-Star in support of saving Victoria Hall.
“We decided a chartered non-profit corporation would be formed as a legal entity. In the book, I intend to bring back into common knowledge the history of the Society for the Restoration of Victoria Hall.”

While the town could not solicit funds, the society (founded in the fall of 1971) would act on its behalf to raise the money, budget the money, arrange the contracts and whatever had to be done. This included the hiring of renowned heritage-restoration architect Peter John Stokes.
They got an initial Local Initiatives Program grant to, as Taylor put it, start taking things apart.
Among the parties leaving Victoria Hall for new premises were the provincial court, the Masonic Lodge and the Order of the Eastern Star. As for the town administration, it set up shop down the street at the armoury (now the Cobourg Police Service headquarters).
The building shut down in 1971. The gallery (still headed by Taylor) became the first tenant of the restored Victoria Hall in 1975 and, over the next five years, the building became operational again in stages.

The work in progress seemed to be a non-stop discovery of how big the job was (for instance, every lintel spanning the uprights that framed every door and window was rotting). They raised the budget to $1.7-million in 1972.

By 1973, it rose to $2.5-million, largely due to the extent of rot in the second-floor Opera House.
“Everybody who lived and worked in Cobourg knew that the Opera House floor bounced,” Taylor said.
“The courthouse below often complained of the chandeliers bouncing when people were running around the Opera House.”
The deconstruction revealed something nobody alive recalled – that the room was originally a Concert Hall until a permanent stage and balcony were installed. Taylor is proud of the restoration work that produced a flexible, multi-use Concert Hall that serves the community for everything from professional performances to private functions.
He also told the group that, when that room was built, it was the largest room in Canada. Later, an Opera House keeper actually lived on the premises in an apartment over the stage that was then the largest apartment in town.

As for the iconic clock tower, there was serious rot underneath it that made it tilt six inches off plumb – it had to be removed.
Discussions with MP Allan Lawrence and Secretary of State Hugh Faulkner brought the offer of $400,000 each from the province and the Federal government, provided Cobourg would pony up $400,000. It was a big leap forward when the town was only providing the society $11,000 a year to pay for a secretary, but two or three months of persuasion brought them around.
Once the art gallery was on the premises, Taylor recalled, they got a $100,000 Federal grant. He was able to apply much of it to Victoria Hall.
The budget seemed to be on a constant uphill gallop, Taylor said. But there was just no option, if this 1860s building was to be brought up to 20th-century standards.
He is proud of the attention to the 19th-century heritage, however. In the Old Bailey courtroom, for example, things were carefully dismantled, catalogued and stored so that they could be accurately set up again when the building was safe.

The other prong of Cobourg’s 19th-century two-pronged push for pre-eminence actually goes to the question of why Victoria Hall went beyond the simple requirement for a town hall and became a grandiose half-million-cubic-foot edifice.

“It’s built for a city that never came to be, because it was predicated on the Cobourg-Peterborough Railroad,” Taylor said.
Railroads were burgeoning in the 1840s. Cobourg’s town fathers realized all three major cities were on the Grand Trunk Railway corridor and all three boasted good harbours on Lake Ontario. A spur to Peterorough, they figured, would put Cobourg ahead of Toronto and Kingston.

A charter for the Cobourg-Peterborough Railway was granted in 1852, and they were ready to go. William Weller, a Cobourg councillor who at the time was the nation’s big stagecoach magnate, invested heavily in the venture, figuring a healthy railroad would cut into the stagecoach market.
That was the same year they launched a contest to get the best design for Victoria Hall, Taylor noted.
The sod was turned for the railroad in February 1852. On Dec. 29, 1853, it was considered complete, right down to the three-mile-long span across Rice Lake. A celebratory train took everyone who was anyone in Cobourg to a big gala in Peterborough to mark the occasion.

Taylor showed the few minutes of footage he has already shot to begin his documentary, with his friends (who happen to be professional actors) playing such town fathers as Darcy Boulton and William Weller. One scene shows Prime Minister Allan MacNab arriving in town to lay the Victoria Hall cornerstone, and one shows the town father’s interviewing architect Kivas Tully.
The air of jubilation is palpable in the film. Unfortunately, Tully had never built anything on such a large scale. The design and construction conventions of the 19th century did not stand up over time, and Victoria Hall would be all but condemned 110 years after it opened.

The railroad fell victim to the hubris of that Rice Lake bridge. Each winter brought terrible pounding and destruction to the span.
“By the sixth winter, it had been so constantly debilitated they had to throw up their hands,” Taylor said.
The loss was estimated at $1-million in 1860 dollars, he added. Weller lost everything.
“I am concerned that the Society for the Restoration of Victoria Hall is disappearing into the fog of history,” Taylor said.
“I live in Vancouver, I am in the film industry, I decided I want to make a film about this story.”
Taylor took a moment to express his gratitude to member of the Victoria Hall Volunteers in the audience, saying that group is the successor to the restoration society.
He also mentioned the Indiegogo crowd-funding campaign he hopes will get The Grand Gamble beyond good intentions and into reality. He expects to launch it in the near future.