The Joy of Music – Phase Three 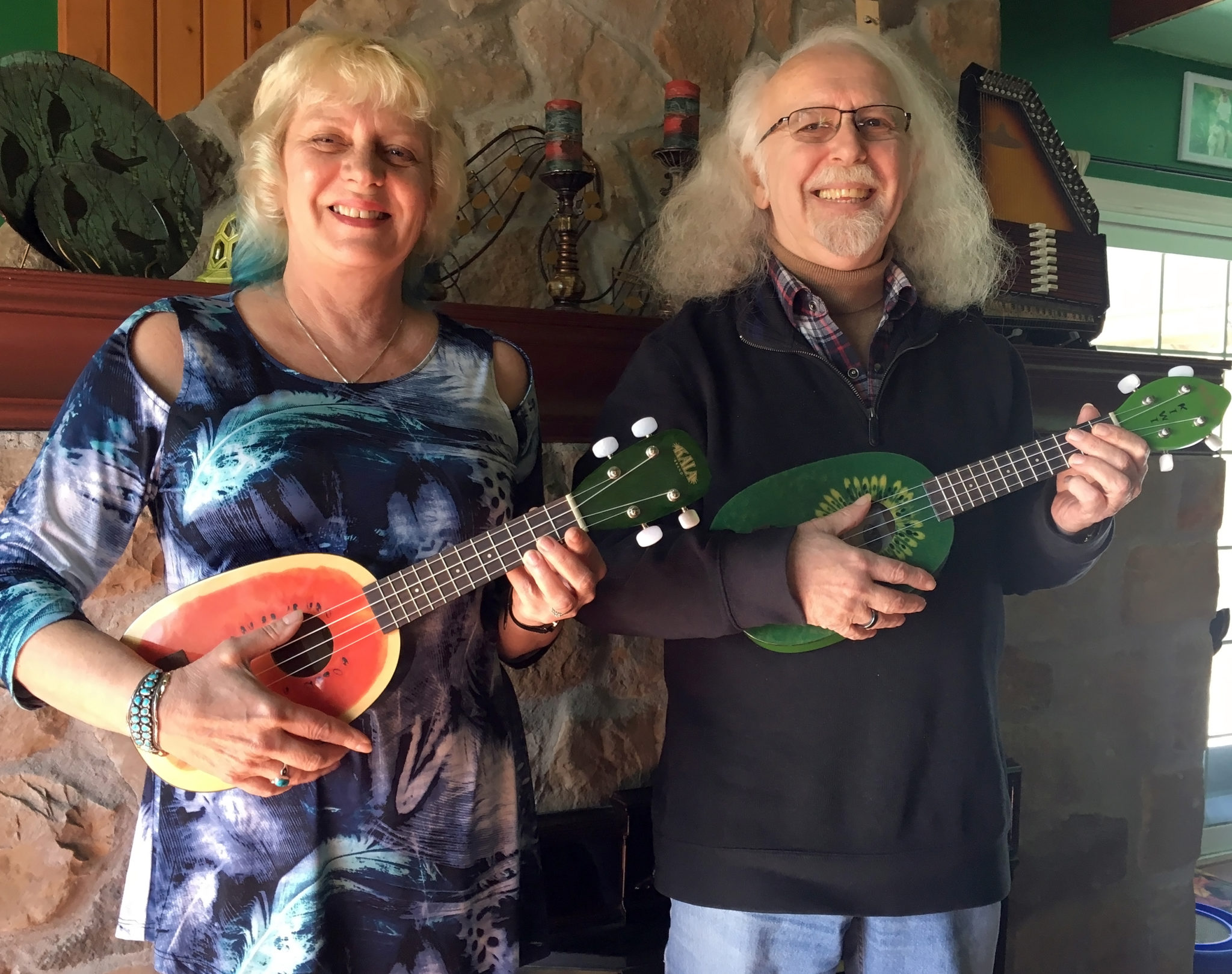 By Cecilia Nasmith
David Hayes and Wendy Bellan are thoroughly delighted with a new way to bring the joy of music to people.
Until a few years back, that meant performing together as Cedarail or sharing the works of their favourite artists through their weekly radio show It’s All About the Music on Northumberland 89.7 (both of which they’re still busy with). Now they also work with a local ukulele group that has proven a hit with both performers and audiences.

Interviewed recently at their Grafton home, Hayes recalled how it all began about four years ago, while he was teaching music at Picker’s Paradise in Colborne during lessons with one of his students.
Lex Luttikhuis (and his wife Michelle Chiunti) are better known for their practice at the Northumberland Veterinary Clinic, but he was also taking bass lessons once a week. Hayes recalls talking with the doctor about the retired people they saw, people who’d spent fulfilling years in various professions but found themselves in retirement with nothing special to do.
“I said it was too bad we couldn’t get some sort of music programming going with a real easy instrument to learn that would get people out – he said, ‘That’s a fabulous idea,’” Hayes recounted.
Luttikhuis put not only approval but sponsorship into the idea, he added. Between Luttikhuis and the Colborne Lions, there was enough to purchase an initial 10 ukuleles and to give Hayes confidence that he could offer the program free of cost – which he considered vital to its success.
“If they have to pay $15 a week or buy a ukulele, they’re not going to do it,” he figured.

With Colborne Public Library chief executive officer Mary Norton on board with supplying the location, Hayes came up with the idea of letting people check the ukuleles out for a given time like a library book. One or two may have gone astray, Hayes said, but the idea has proven sound. And with a grant from the Cramahe 225 Committee, they’ve since expanded that inventory by 10 additional ukes.
The program began, and the group got its first invitation to perform at Colborne’s Christmastime Festival of Trees celebration. It was an exciting first year, and they adjourned for the summer in June. By that time, Hayes found that their students were beginning to want to purchase their own ukuleles. They scouted around for the best places to buy the instrument and even checked on-line sources to get ukulele ownership going among the troops.

Another innovation – people had begun to say ukulele instruction would be a good idea for school children.
Though the couple would go on to assist with the ukulele program that St. Michael Elementary School already ran in Cobourg, they started their own program at the two Cramahe schools – Colborne Public School and Northumberland Hills Public School. About 80 students from the Cramahe schools signed up to give it a try before a natural attrition brought the number down to 30 or 40 really dedicated young strummers. Some of the kids even took it a step further, joining their adult counterparts at the library as well.
The second year brought another Festival of Trees appearance, as well as one with the Northumberland Chorus in Cobourg. They also performed in Colborne at the Apple Blossom Tyme celebration, at the Big Apple and at a Lions Club function. This year, they are looking forward to being part of Apple Blossom Tyme again, as well as a performance in Cobourg’s Victoria Park as part of the Northumberland 89.7 concert series.
Hayes considers the chance to perform an important part of the program.
“If you’re going to learn music, it’s nice to have some goal at the end of it – something to look forward to and work towards,” he said.
“But I didn’t realize how excited these people would get about it.”

The program is still free, thanks to donations and sponsorships and things like the collection jars that Janice McKnight of the Cramahe 225 Committee scattered among local businesses. At one time, photocopying costs for the music Hayes and Bellan have translated into easy-to-understand notation, were an issue. Now they put it on-line for students to print for themselves. A few students without computers print their sheets out at the library, but Bellan and Hayes come through to help those who really aren’t able to access the on-line music. As Hayes said, nobody is going to have to be looking over someone else’s shoulder.
And the program has grown to include two classes – Hayes working with the advanced players and Bellan with the beginners. At the end of each 10-week term, Bellan’s beginners may choose to join the Hayes group and develop their skills beyond that level.
Bellan said the beginners in her last class ranged in age from eight to 90, and their students come from as far west as Port Hope and as far east as Trenton. Though there are ukulele groups in Cobourg and Port Hope, Hayes noted, the big difference with the one they run is that they offer instruction from the most basic beginner level.

“Every week, except maybe the week before a performance, we’re teaching concept so they can get better,” he said, adding with pride that his best students are moving beyond strumming chords to plunking out melodies.
And he makes one thing clear to them all.
“I tell them, ‘We want you guys to be good. We want everybody who hears you to say they enjoyed you,’” he said.
It’s a quality act that continues to evolve, Bellan said. For example, there’s a young fiddler they expect to be performing with them soon. And she has drawn on her own vocal gifts to offer a new dimension with fellow vocalist Marie Lachner, as they encourage some of the younger girls to sing on some numbers.
Bellan described these rehearsals, as they teach the girls how to sing from the diaphragm and hold a microphone professionally, all while she and Lachner hover nearby like a security blanket.

Affordability for the players has been a key consideration and, with that in mind, Hayes has come up with the perfect uniform for shows. He has suggested they visit the thrift stores and find tacky Hawaiian shirts. Bellan also shops for cheap plastic leis to complete the look.
As well as being spiffy, the ukulele players are becoming accomplished musicians, with a repertoire of all kinds of favourites. One of their recent additions is Etta James’s At Last, but audiences will also enjoy songs by the teen idols of their youth that they haven’t heard for years.
The list includes the Supremes (Where Did Our Love Go), Linda Ronstadt (Different Drum), the Dave Clarke Five (Because), Jackie DeShannon (Put A Little Love In Your Heart) and Ricky Nelson (Lonesome Town).

Hayes considers it unfortunate the ukulele is an instrument that hasn’t gotten a lot of respect. It enjoyed a vogue in the 1920s, being cheap and portable, but that didn’t last. He is encouraged to see Taylor Swift taking it up, which is starting to make it cool again among young people.
The ukulele is somewhat unique, he has found, in that anyone who puts in a little bit of time on it in a conscientious manner becomes quite good at it within a couple of years’ time – unlike the sitar, for example, which one can play one’s whole life and still not master.
“The one thing we tell them is, we are like the Marines. We leave no one behind,” Hayes said.
“It’s amazing – most of the people who started at the beginning are still there.”